The Braid (2020) is a steel sculpture by sculptor Kalliopi Lemos, who is known for her large-scale public installations. The upright braid of dark brown hair has a length of 6.5 meters in height. The Braid is part of her recent image series Tools of Endearment and reflects on the role of femininity in modern society.

Cutting the hair braid alludes to a gesture of disobedience, a radically personal gesture against (patriarchal) coercion. But also it also alludes to cutting off old ideas, to change, as an act of liberation and coming of age. In 2020 The Braid braid was purchased by the Droom en Daad Foundation and donated to the municipality of Rotterdam. The work has been added to the sculpture terrace on the Westersingel and was unveiled by alderman Said Kasmi on 8 March 2021, International Women’s Day.

On International Women’s Day and in honor of this new image in the city, CBK Rotterdam, together with Art Index, launched the DYI Women’s Art Walk, a beautiful walk through the city center, past works of art made by women. The walk starts at the The Braid. For a free download click here. 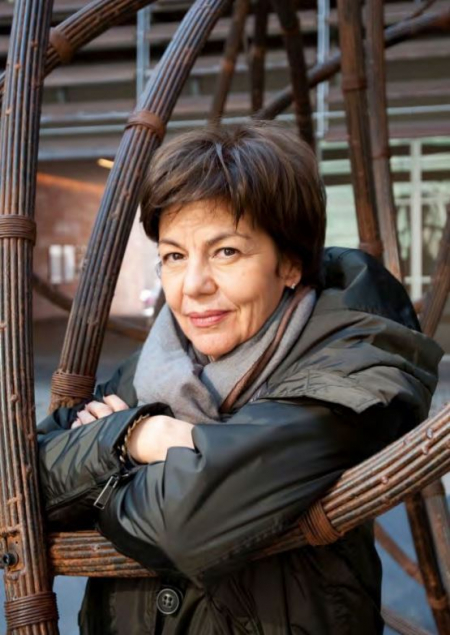 Kalliopi Lemos (1951) was born in Greece and lives and works in London. She is a sculptor, installation artist and painter. Lemos studied at the Byam Shaw School of Art, University of the Arts London and Central Saint Martins. She is known for her large-scale installations in public space, in which she draws attention to the increasing global migration and oppression of women. Lemos has exhibited at various international locations. Her work can be found in private collections and in various museums in New York, London, Athens, Crete, Istanbul and Canakkale, among others.

Kalliopi Lemos in a recent interview: “I was saddened to learn that Ruth Bader Ginsburg (March 15,1933 – September 18,2020), U.S. Supreme Court Justice and Guardian Angel of Human and Women’s Rights, has passed away. “Real change happens one thing at a time – enduring change happens one step at a time,” she said. The Braid could serve as a memorial to her qualities, her philosophy, and the principles that guided her life—as a compass for humanity. She embodies everything that inspires me. Through her strength, she has shown women that their goals in life can be achieved. The Braid is a feminine sensual symbol made of hundreds of intertwined thin rods that ambitiously ascend to the sky as if by standing erect alone expressing its own statement of self-worth and defiance. The Braid, with its formidable size, expresses these thoughts.”

A game of combative aspirations

Like a huge sundial the sculpture stands on the quay; its shadow casting a capricious line ahead. It is a new beacon in Rotterdam: The Plait by Kalliopi Lemos. The sculpture reaches up on the Westersingel like a victory column or obelisk but with feminine contours. The hair strands revolve around one another elegantly. Their joint force is six and a half meters high: a current of energy that defies gravity and makes you quicken your pace. Whether you’re coming from the Central Station or the opposing Westzeedijk, The Plait marks the axis and reaches out to you from a distance. Come closer, and the details take over with a miraculous effect. Earlier, you may have involuntarily straightened your back, following The Plait’s example. A wavy pattern of fine lines now seduces you. The Plait is more than a silhouette. Countless long, thin steel wires have been cut, welded, and bundled, all forming singular strands of hair. Together, they reveal relief, dynamics, and warmth. Light dances through the brown hair, shining on the surface, glimmering in its depth. First, you are pulled in, then The Plait twists you around. The devil is in the detail – you even perceive a reddish glow.

How can a cut-off braid stand upright? What is naturally soft, fluid and supple, now orbits to the sun in revolt. Kalliopi Lemos transformed 14,000 meters of steel wire for it. The Plait, in the shade of her own hair, has been armed: a totem with its umbra. This magical reversal is precisely what Lemos is after. In a game of mythical and magical powers, she places her work in opposition to the unequal treatment and oppression of women. Born in 1951 as the eldest daughter of a sea captain in Greece, she dreamed of becoming a naval architect. No, her father said, who had rather had a son: “That’s a ladder you can’t climb as a woman.” Even though the port, with its cargo ships and cranes, was her home too. “All those ships, the metal, steel, iron and rusty colors, those robust materials and their size, that’s what I have grown familiar with guided by the hand of my father. When I started making sculptures, he had passed away. Nevertheless, it feels like we run into each other now that my work is in Rotterdam. My father often moored in Rotterdam to unload and refuel. Through the port he frequented and my work ending up in this city of all places, our lifeline has become entangled after all.”

Lemos has lived in London for decades and started a family there. When her children were in school, she went to art academy in 1992. She attended Byam Shaw School of Art, University of the Arts in London, and Central Saint Martins. Initially, she profiled herself as a painter with large canvases, then increasingly as a sculptor, performance, and installation artist, with monumental works in public spaces. “Like the eruption of a volcano,” she says about the development of her work. “The motivation always emerges from the realm of the subconscious. My work is rooted in conflict—the darker aspects of being. Intellectual reflections, poetic associations, and the construction of sculptures, in collaboration with a team of people and large machines, are all of later concern. Reasoning and calculations are preceded by experiences that concern the imbalance in the human condition and all emotions involved—straight from the gut.” Imagining those feelings, or as Lemos puts it, ‘pulling them out,’ is a sensory game of tilting and turning; a bending, kneading, and arranging of twigs, reed stems, wood, and pebbles she collects in her studio among abstract figures of clay and plaster. Yet, this game has a double foundation. It is loaded with combative aspirations.

Just as a rotating crane has its role in the port, Lemos gives the artwork a pivotal role. It gauges, calibrates, and recalibrates the position of women in society. The Plait is not her only measuring instrument with an activist angle. It is the sixth sculpture in a series of statues about social role play, under the double-barreled title Tools of Endearment, which has both the connotation of gear and more intensely, weapons of endearment. These statues are beautiful yet dangerous. They all play with the symbols of feminine embellishment and sensuality, from long hair and high heels to butterfly bra straps. Enlarged to massive proportions and sharpened, they manifest themselves in the urban landscape. Besides an aesthetic function, these artworks also have a pronounced ethical function. They represent a three-dimensional rectification on the appearance of billboards that portray the same voluptuous role model of pin-up models. They also pose a warning to the abuse of power and violence.

In this vein, Lemos placed a mega-pump in central London with a shiny dagger as its heel—stiletto heel. She also installed freely fluttering lingerie that had been armored: a bra with steel straps next to a corset with sharp edges, stiff in its waist: straight jacket, and harness in one. A giant necklace rolls across the square but emerges as an ornamental weapon, with beads that burst open like flower buds or fruit boxes swarmed by thorns. These beads are seeds and jaws, reminders of the mythological depiction of the vagina dentata—the nightmare of any man, particularly those with unwelcome erections. There is also a classic handbag, size XXL, that seems to be made of supple ostrich leather yet is forged from steel. The contents remain a mystery; the bag has been closed with a golden padlock: it is the domain of female secrets. Filled with gadgets and desires, perhaps, but possible fear too. Speaking of size and scale, ‘My handbag is big enough to hide myself in. If need be, I could completely disappear inside it,’ Lemos casually notes.

In art, hiding is the last thing Lemos does. She conjures up personal experiences and memories and opposes threats with a combination of female power and force. Her ‘Tools of Endearment’ appear in the public domain like strategically installed armor of a giantess or a goddess of fate. The Plait (2020), the most recent statue in the series, is an ode to strong women. Her grandmother, in the first place. As a girl, Lemos wore a plait herself. When she was fifteen, she had it cut off and gifted it to her grandmother in a ritual of connectedness, but also of maturity and autonomy. Since her grandmother’s passing, she has kept the braid for her children. The powerful artwork that sprouted from it can be read as an ode to the heroines in fairytales and myths that had to fight for their beauty, safety, and freedom. Think of Rapunzel, who let her wavy hair hang from the tower as a ladder for the prince before the wicked witch cuts it off. The mermaid, who sacrifices her tail for love. The nymph Daphne turns into a tree to escape her assailant. And finally, remember Medusa, whose curls grow into a swarm of snakes that turns everybody who dared to look at her into stone. “The feminine and the fighter come together,” Lemos says. “We have to stand for ourselves and our beliefs.”

The Plait is a beacon of courage and a measure of gender equality. Not by coincidence, the sculpture was unveiled on International Women’s Day 2021 in Rotterdam, thanks to The Droom en Daad Foundation, who donated it to the city. It is important to note that this is only the start of female artists catching up. The Plait is the first artwork on the sculpture terrace on the Westersingel made by a woman since the quay was appointed as an open-air museum for international sculptures. It’s an instant hit, no doubt about that. The Plait towers over its surroundings, very erect, but also incredibly refined—like the needle of a compass for the future.

The citations are based on a conversation between the artist and writer on 15 April 2021.