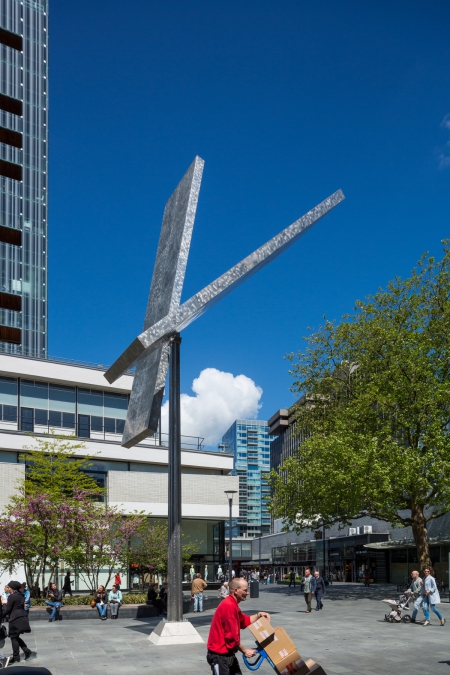 In 2015, after a three-year absence, George Rickey’s sculpture Two Turning Vertical Rectangles returned to the Binnenwegplein. Sadly, the joy upon its return was short lived: the sculpture was seriously damaged when a truck backed into the work in November. The panels were dented and partly detached from the central post to which they were attached. The November storm only worsened the situation, causing the city to temporarily take 0ff both panels.

The sculpture returned in April 2015, after being removed in 2012. The surrounding buildings created stronger winds, and the raised squared cause the work to no longer answer to current safety regulations. At their lowest, the panels were only 2.11 meters removed from the ground, posing a risk to passers-by. During the renovations of the work, the panels were on show at Witte de With Center for Contemporary Art, as part of a research project by Bik Van der Pol.

City mechanics are currently examining the damage to see whether the sculpture can be repaired.