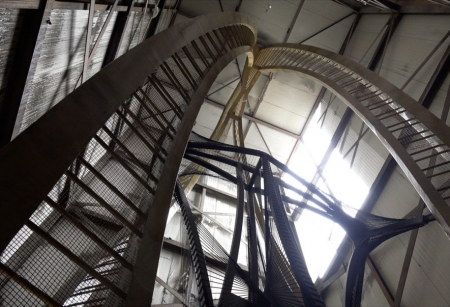 In Mels van Zutphen’s short documentary film Het Ding (Untitled, 1957) – a paneled-up sculpture of Naum Gabo at the Bijenkorf in Rotterdam slowly becomes visible during months of restoration. Through elusive images and sounds, and fragments of Naum Gabo’s modernist speech, the movie guides viewers towards the Gabo’s final unveiling. The film was commissioned by CBK Rotterdam / Sculpture International Rotterdam. Het Ding (‘The Thing’ is one of the sculpture’s nicknames) premiers during the Dutch Film Festival in Utrecht on Sunday 30 September. The festival takes place from 27 September to 5 October. The film will be shown a second time on October 2nd.

Mels van Zutphen (1963, Amsterdam) lives and works in Rotterdam. He makes films and video works. Films with a narrative structure, but also video loops without beginning or end. Sometimes the result is an installation with several projections that are related to each other.