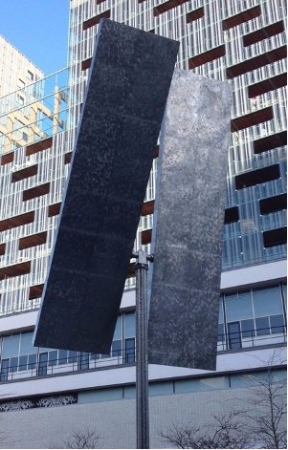 The artwork consists of two rectangle panels, attached to a central pole. The sculpture was removed in 2012, due to safety concerns – at a certain time, the panels’ lowest point was only 2.11 meters above the ground. Rotterdam engineers, the George Rickey estate, as well as Sculpture International Rotterdam collaborated to find an appropriate solution, which they found in the installation of a new, and higher pedestal. The sculpture’s foundation was renovated, too. The sculpture now fully complies with current safety regulations.

Two Turning Vertical Rectangles
The sculpture was placed on Binnenwegplein in 1971, after serving as a test-installation in Boijmans van Beuningen’s museum garden. Originally, the panels were intended to be part of a much larger design; measuring 20 meters in height, and consisting of 8 identical panels, with water streaming down each panel. This object was designed for the Hofplein-fountain, but was rejected by the city council. The local Shopkeepers’ Association then decided to adopt a part of the design and place it on ‘their’ Binnenwegplein, and adopted it to the city. The cascade sculpture was never realized, but the ‘test-sculpture’ was preserved for the city. Two Turning Vertical Rectangles is now an autonomous sculpture, which was revealed on the 7th of May 1971 on Rotterdam’s Binnenwegplein.

In 2014, while the sculpture was temporarily removed from its original location, the two panels were shown at Witte de With Center for Contemporary Art as part of the exhibition The Part In The Story Where A Part Becomes A Part Of Something Else, as part of a research project ‘up close’ by Bik Van der Pol.