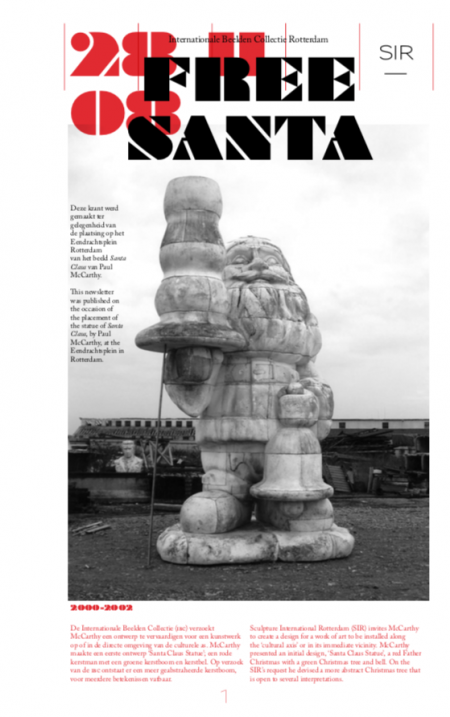 Eli, Eli, lema sabachta-ni? My God, my God, why hast thou forsaken me?

The images of Santa Claus and the garden gnome are often forged into a single character. To me, both are hideous, unimaginative beings for which I can summon no affection whatsoever. I gather that many other people share this lack of understanding and empathy. Santa Claus is, nevertheless, the darling of millions and the symbol for the greatest feast of love and conviviality in the USA. The J.P. Meertens Institute, which studies the ethnology of the Netherlands, thinks that the struggle between Sinterklaas and Santa Claus is all but settled. As our indigenous bishop (celebrated on December 5th with the presentation of small gifts and a flurry of scurrilous rhyming couplets shared among loved ones), Sinterklaas – St Nicholas the Wonderworker – bedecked in a red velvet cape over his long lace frock and poised precariously on a white steed, is the acme of theatrical imagination. Soon, however, Sinterklaas will be stepping aside for Santa Claus and will vanish from our living culture, made bankrupt by globalisation, thanks to (Dutch) shopkeepers and thanks to Rotterdam: Santa Claus can now be displayed in public!

It is a widely reported saga. This renowned artwork by Paul McCarthy was commissioned for the public space in Rotterdam, but on further consideration the City Council decided it could not be displayed in public. This six-metre-high bronze with its blackened patina is based on hackneyed representations of Santa Claus and garden gnomes. He has a butt-plug in his right hand and a bell in his left. It is unknown whether the abovementioned struggle to preserve our national culture has unconsciously played a part in the Rotterdam affair that has dragged on for six whole years. The struggle revolved around the object in his right hand and the unsightliness of this work. Santa Claus is the ideal target for McCarthy; the ultimate symbol of sentimentality, of massive commercial success, of consumerism. In essence the ultimate symbol of the USA. He attacks this symbol time and again in his work and has often personally played the part in his films, with all the might and feistiness he can muster as an artist.

One evening, in Rotterdam on completely unrelated business, I was walking through the museum quarter. Behind the bars of the gate, in the courtyard of Museum Boijmans Van Beuningen, I saw Santa Claus, the wall of the monumental building designed by Ad van de Steur covering its back. My heart skipped a beat at the gut-wrenching sight of this formless, dejected mass with not to be missed references to the Statue of Liberty. It sets everything that is supposed to be cheerful, pleasant or united in a bad light. A Santa Claus or a garden gnome who does not sit well with himself is a perplexing phenomenon. The black shoes, the black bell, that belly swaddled in those strange clothes, the gaping face with the smirk of a garden gnome … and the listlessly elevated (when by nature energetic) phallic form … the complexion of asphalt, instead of the red and green one would expect ….

Here we see a tormented man, bowed by his own heaviness and the weight of his baggage. According to the laws of sculptural art, I don’t believe it is a fine sculpture; I don’t even think it is a sculpture. Santa Claus is an exaggeration of just such a poorly designed garden gnome transformed into a monument; an Andachtsbild, a devotional picture for contemporary mankind suffering lethargically. This makes it a highly topical work of art, a work of gruesome opulence for the public space.
For the first time in my 40 years I was touched by Santa Claus, who, in McCarthy’s version, has taken the weight of the world on his shoulders. For the first time the cliche became human. Fortunately, this heap of black misery created by McCarthy is now being enthusiastically welcomed by one of Rotterdam’s more lively boroughs in the city centre as a cheerful garden gnome, the favourite of shopkeepers, women and children; in the midst of large plane-trees, small shopkeepers and the shopping masses.

Strange folk, those Dutch people. Or is the same thing happening as with the live Santa Claus: the cliché stands as a symbol for good cheer, peace and amiability.
Nothing can detract from this, no matter how gruesome its likeness.