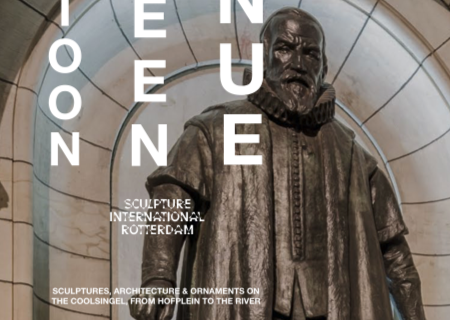 The turbulent history of Rotterdam in 1000 meters of street, art and ornaments

If you stroll over the Coolsingel from the Hofplein to the Erasmus Bridge, you will pass many special works of art, buildings and ornaments, in a walk just one and a half kilometers long, in a chaotic street that vividly recalls the turbulent Rotterdam history.

Masterpieces on the avenue
The Coolsingel is an avenue formed by memories – of catastrophes, large-scale changes, massive mourning and celebrations – and successive urban visions.This map highlights the works of art and special ornaments, and was made in 2016 on the eve of the implementation of the new boulevard vision onto the Coolsingel. Parts of it have already been realized or are in progress, such as the Stadhuisplein. As a contribution to a future interesting public space, Sculpture International Rotterdam has highlighted the uniqueness and potential of the Coolsingel over the past seven years, with art projects in conjunction with the existing works of art in the SIR collection. Domestic and foreign artists reflected on the past, present and imaginary future of this public space.