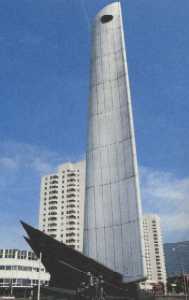 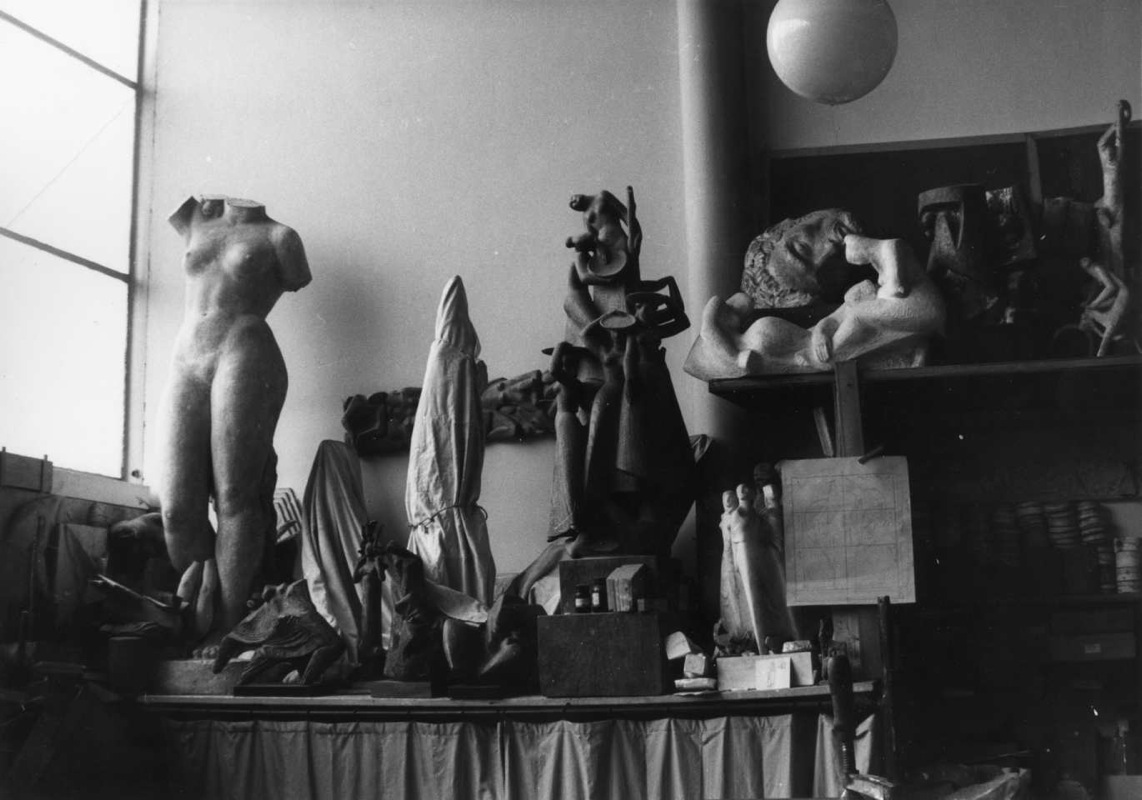 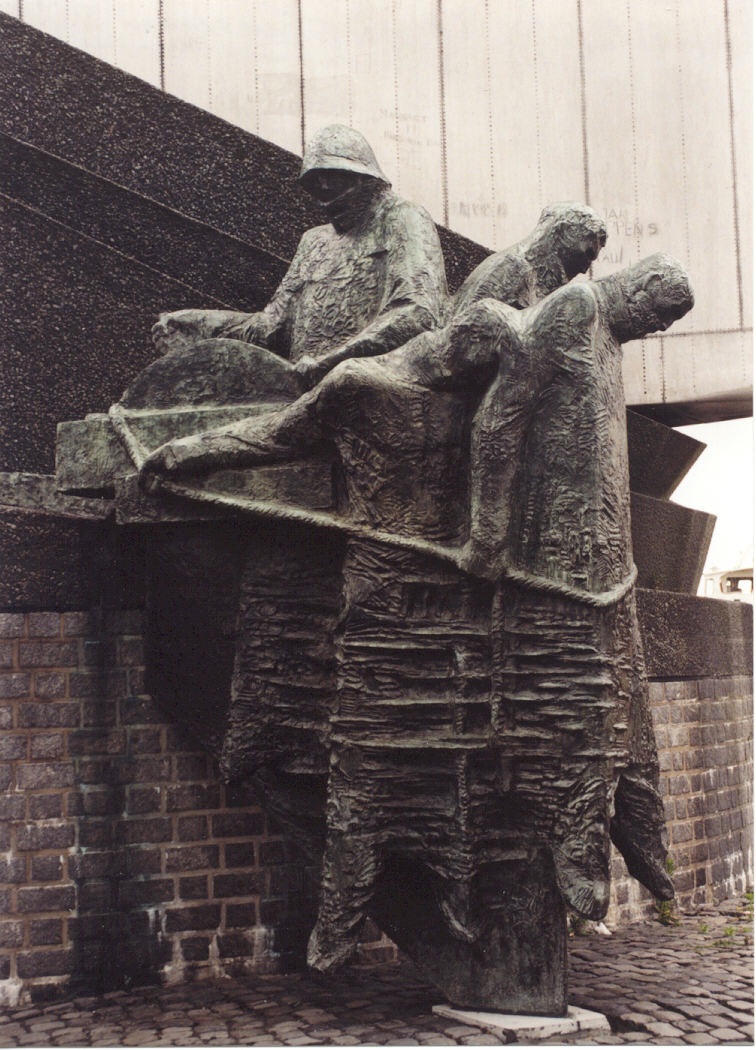 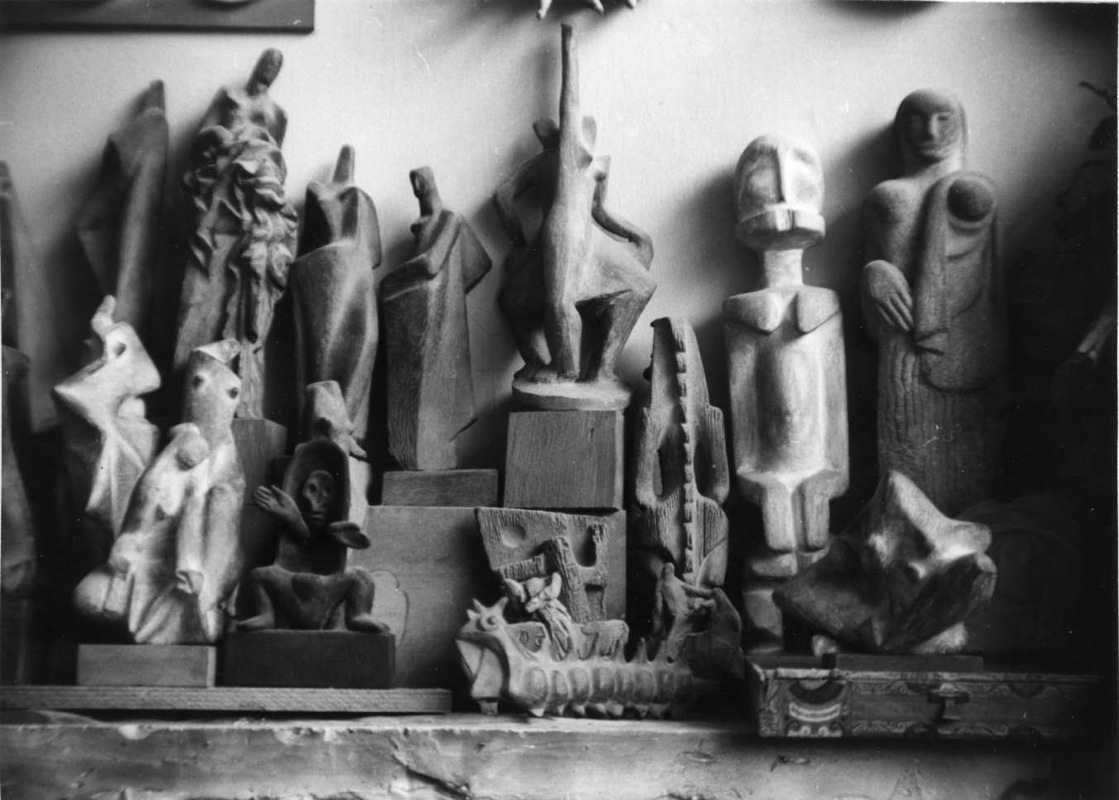 Carasso created the National Monument for the Merchant Navy in memory of the victims who died at sea during the Second World War. The statue is 46 metres high, and is entitled De Boeg (‘The Bow’). The sculpture is a stylised ship’s bow, ‘cutting’ through concrete waves. The piece was unveiled in 1957, and even before the unveiling, the sculpture was the object of criticism; the decision was later made to add a human element to the work. In 1965, a group of bronze figures were placed at the foot of the statue. The text ‘Zij hielden koers (they stayed on course)’ appears at the base of the monument.

A pastel drawing made around 1950 was a first study for De Boeg. It shows an abstract image in which various angular and round shapes are piled up on top of and piercing one another. An elongated triangle towers out above the image. In this work, the sculpture appears to be a playful collage of shapes, evoking associations of a ship here and there, for example, a bow, waves and a steam pipe. Carasso sketched the image on the quay; one of the bridges over the Maas River comes ashore under the statue.

The final design was created in 1956; a wooden sculpture 230 cm high, covered with metal tape. The model was sold at an auction in 2005 by the Historical Museum, the Museum Boijmans Van Beuningen, and the Maritime Museum in Rotterdam for 18,000 Euros. This sculpture is much sleeker and simpler in shape than the initial study. It was then executed according to the design, and De Boeg was unveiled on the quay of the Leuvenhaven in 1957. Like the bow of a ship, an aluminium column rises 46 metres high, towering over the angular concrete waves. The sculpture has much harder lines than the study created in the early 1950s. It is primarily a portrayal of the perseverance and drive of the mariners.

Even before it was unveiled, the sculpture was the subject of a great deal of discussion. The National Monument for the Merchant Navy foundation asked Carasso to ‘make the human element more prevalent’. It would be some time before the foundation and the artist were able to agree on the form this human element should take. It wasn’t until 1965 that the group of figures were placed at the foot of the monument. The group is made up of a helmsman, three mariners, and a drowned man, all of whom are tied to one another and to part of the ship by a rope. Huddled together, they fight against the water. Next to the high waves and the bow towering over them, the figures still appear rather diminutive. 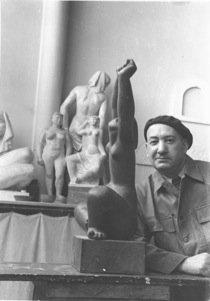 Frederico Carasso was born in Carignano, Italy in 1899 as the son of a furniture maker. When the furniture factory went bankrupt in 1913, he went to work in the Fiat factory. In 1916, he was drafted into military service, and remained in North Africa for several years. The oppression of the local population there, and the social problems in Italy shaped his political views, and he became a member of the Communist party. When Mussolini came to power in 1922, he was forced to leave the country for political reasons. In Paris, he worked at a furniture manufacturer, and was trained as a traditional craftsman. In 1928, his political activism once again forced him to leave the country, and he moved to Belgium, where he earned a living as a woodcutter and joined the avant-garde and Surrealism movements. His activism was not appreciated in Belgium either, and he was expelled from the country in 1933. In 1934, he settled in Amsterdam. Although there were problems with his residence permit, thanks to his highly valued work for Michels Wasfiguren en Installatiemagazijn, he was able to remain in the Netherlands. After several years, he became a member of the Dutch Society of Sculptors where he came in contact with many colleagues. In 1938, he had his first solo exposition in the Netherlands at Galerie Robert in Amsterdam, which dedicated a great deal of space to Surrealistic works. The reviews in the newspapers were full of praise, and Carasso instantly made a name for himself. He was able to devote all of his time to art in 1945. After the war, he played an important role in the re-organisation of the Dutch Society of Sculptors. His active role in the resistance also garnered him a great deal of respect and influence.

In 1947, he was asked to design a sculpture for the Olympic Stadium in Amsterdam, in memory of the fallen athletes. It was an enormous figure of a man holding a torch, and was entitled ‘Prometheus’. At the time, this huge sculpture was the largest in the Netherlands. Various monuments to the resistance followed, for the Municipality of Dreumel, Philips in Eindhoven, and the Municipality of Sprang-Kapelle. In 1953, a second commission from Philips followed; a sun dial which aimed to depict the company’s growth and progress. In the early 1950s, the contest to design the National Monument for the Merchant Navy was held, and Carasso ultimately placed as one of the winners. Although he was not chosen as the first place winner by the judges, his design received the most applause from the press and the general public. Not long after this, a retrospective of his work was shown at the Rotterdamsche Kunstkring (Rotterdam Art Society) in 1953.

At the time, Italian sculpture was gaining in popularity, and Carasso wrote several articles about it in De Kroniek and Apollo. Commissioned by the NKB, he travelled to Italy to establish contacts and study the possibility of an exchange programme. In 1954, he wrote the foreword for the Mostra exhibition at the Rotterdamsche Kunstkring, which was dedicated exclusively to Italian art. In 1958, he was one of the judges at the Sonsbeek exhibition where he was responsible for the selection of Italian works. He did not appreciate the developments within the world of sculpture without reservations, however. In 1953, with his article ‘De knuppel in het Hoenderhok‘; published in De Kroniek he discussed the increasing conflict between realism and abstraction in sculpture. His commentary on the work of artists such as Ossip Zadkine was not appreciated. In spite of his objections to abstract art, his own work became less realistic during the 1950s. Figures became more stylised and angular. The subject, however, always remained recognisable. During the 1960s, his work once again became more realistic, and the shapes were more rounded.

Carasso is primarily known as being a sculptor. In addition, he also created works on paper, in a variety of styles and techniques. These works vary from colourful and cheerful gouaches to darker pastel drawings, pen and ink drawings and collages. The subjects range from illustrations to cartoons. The collages and pen and ink drawings in particular are sometimes absurd and mocking in tone. The oppression by Fascism and colonialism are topics which also appear frequently. In 1956, Carasso was appointed as a professor of sculpture at the Jan van Eyck Academy in Maastricht as the successor to Oscar Jespers. In spite of the fact that he was no longer a member of the vanguard, he still remained a successful sculptor with plenty of commissions and exhibitions. Carasso died in Amsterdam in 1969.