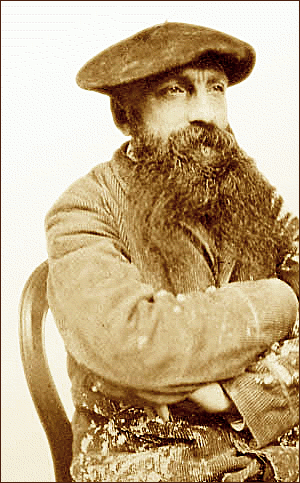 François Auguste René Rodin is considered one of the greatest sculptors of the twentieth century. He was born in Paris in 1840. He began his studies at the age of thirteen at the Ecole Spéciale de Dessin et de Mathématique, later the Ecole des Arts Décoratifs. Because he wished to concentrate on sculpture he followed lessons with the sculptors François Rude and Jean-Baptiste Carpeaux. He actually wanted to attend the prestigious Ecole des Beaux-Arts, but was refused access three times.

After his studies Rodin worked as an ornamental painter, caster and chaser. He worked in the studio of the academic sculptor Albert Carrier-Belleuse and with the Belgian sculptor Joseph van Rasbourg on the decorations of the Stock Exchange in Brussels. During a trip to Italy in 1876 he studied ancient Roman sculptures and the work of Donatello and Michelangelo Buonarotti. Inspired by the latter, upon his return to Paris he made The Age of Bronze, a male figure that was exhibited at the Salon des Artistes Français

in Paris in 1877. The sculpture caused a scandal: critics claimed that he had not modelled the figure in clay but that he had taken a cast from a living model.

The publicity he gained from this episode led to a commission in 1880 to make the gates for the future Museum of Decorative Arts in Paris. The museum was never built but Rodin worked sporadically on The Gates of Hell for thirty-seven years up to his death. He developed several figures from the gates into independent sculptures, including The Thinker (1880).