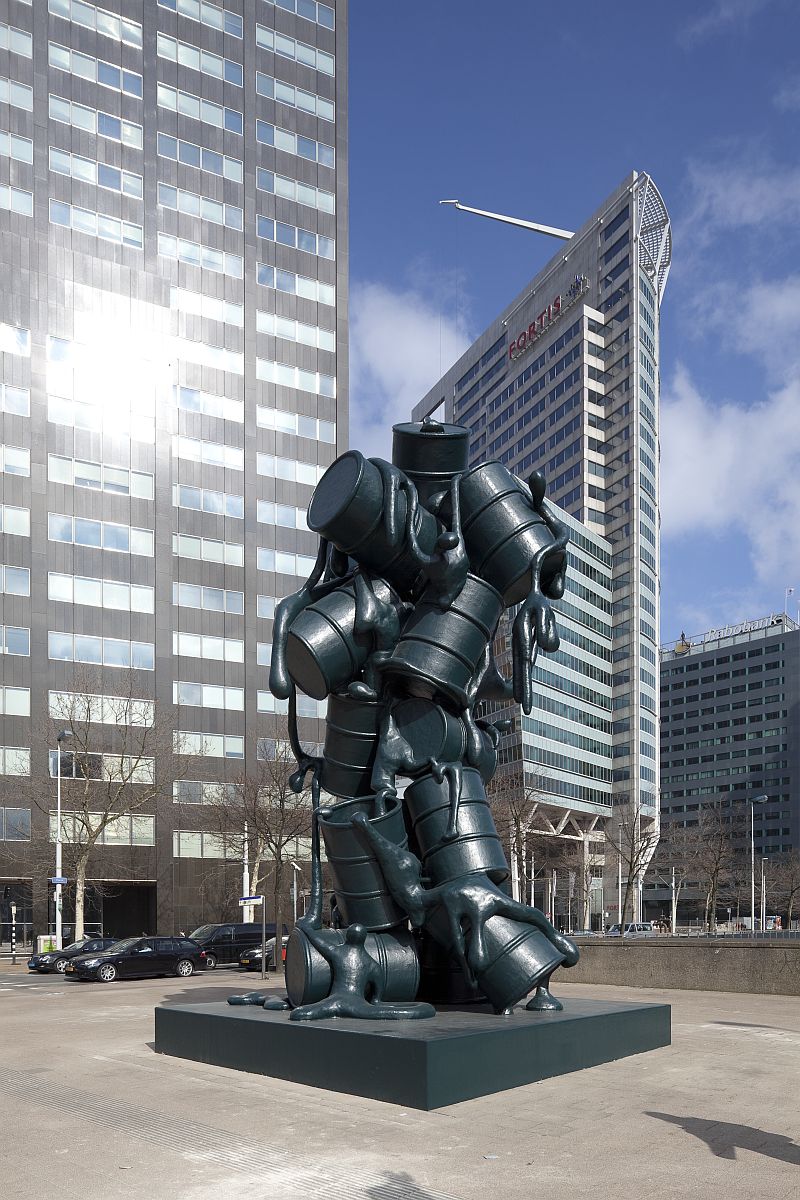 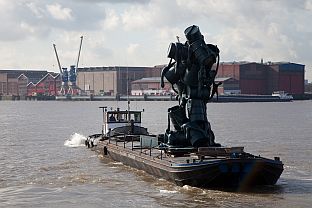 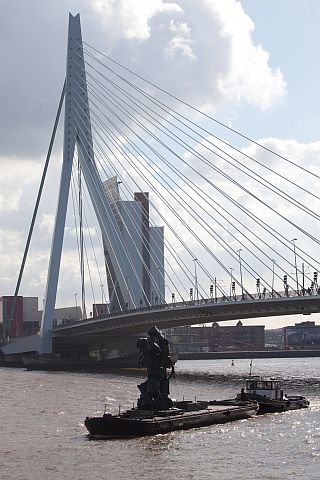 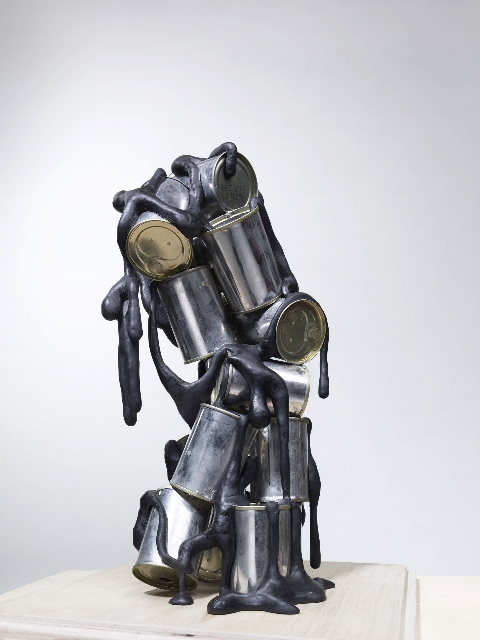 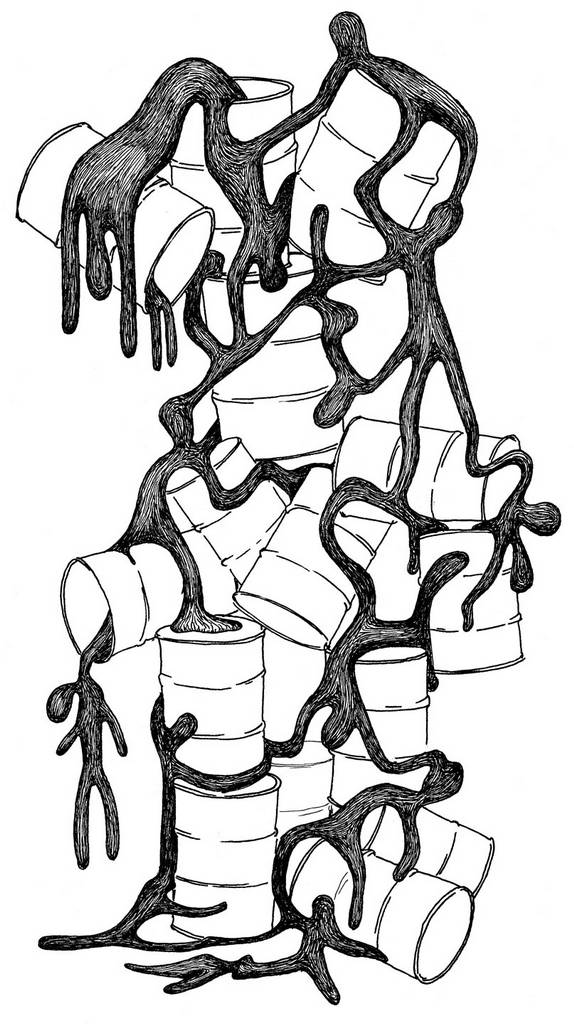 The eight-metre tall sculpture is made of polyester, a material that can almost be regarded as the signature of Atelier Van Lieshout. Eighteen stacked oil drums, which appear to descend from the sky like a waterfall, combine to form a monumental column. From the life-size drums drips a syrupy mass in which one can make out the shapes of a score of human figures. They are anonymous beings, many of them in dramatic poses. One of them climbs upwards. In comparison with the robust contours of the oil drums, the figures are limp and formless. Despite that, these shapes form a network that supports the column. Drums and human shapes, rigid and limp forms, have melted together into a single whole.

ATELIER VAN LIESHOUT
From the very beginning, Joep van Lieshout’s works of art have been the embodiment of his ideas about art and society: from the utilitarian sculptures of the ‘eighties and mobile homes of the ‘nineties to the ‘free state’ of AVL-Ville (2001) and the recent SlaveCity (2003-2008). Cascade, too, is the embodiment of a social statement.
Van Lieshout cites victory columns, especially the Pestsäule in Vienna, as his source of inspiration. In 1693 the city of Vienna celebrated the end of the great plague epidemic with this baroque memorial. In Cascade, which is equally baroque, the clouds and angels are replaced by oil drums, emblems of the international port that is Rotterdam. The celebratory atmosphere of the Pestsäule has been displaced by more sombre mood. The sculpture by Atelier Van Lieshout evokes associations with the current economic crisis, the exhaustion of raw materials and the bankruptcy of the consumer society. These interpretations are brought into sharper focus by the sculpture’s location at the junction of Coolsingel and Blaak, at the centre of the commercial and financial heart of Rotterdam. Apart from these attributions inspired by current events, many other interpretations are possible and may even be diametrically opposed. It is left to the viewer whether to see the sculpture as a contemporary image of the decline of the human race, or as an ode to the resilience of the individual who manages to rise above all difficulties.

ICONS OF THE CITY
Over recent months, Cascade has taken on its final shape and colour at AVL’s workshop in the port of Rotterdam. At the beginning of March, the colossus will be transported across the Maas by ship, to dock at Leuvehaven. This event evokes memories of another sculpture. Over fifty years ago, Naum Gabo’s sculpture for the Bijenkorf also arrived by ship at virtually the same spot. Together with Zadkine’s ‘Destroyed City’, this sculpture was there at the start of the City of Rotterdam’s international sculpture collection.
Cascade will take its place just a stone’s throw from both the sculptures and will have to compete against these classics. Compared with the unambiguous modernism of the Gabo and the sincerely professed humanism of the Zadkine, Atelier Van Lieshout’s sculpture is much more ambivalent. Cascade derives its vitality from the strange combination of its monumental stature and the employment of an unusual material for such a monument; from the tension between the almost abstract design and the extremely direct imagery, and from the mixture of drama and slapstick. These characteristics endow Cascade with the potential to mark one of the busiest spots in the centre of Rotterdam and to provoke the passer-by not only visually but also as a statement. Cascade has the capacity to become an icon. 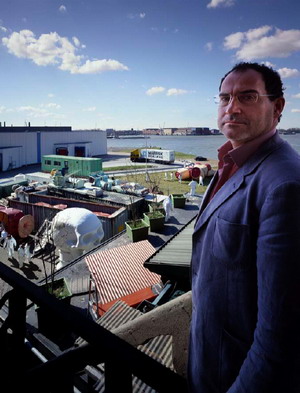 Joep van Lieshout (1963, Ravenstein) lives and works in Rotterdam. Since the early eighties he produces objects in mainly bright coloured polyester, the material that would become his trademark in subsequent years. In 1995 he founded Atelier Van Lieshout (AVL), undermining the myth of the individual artistic genius. Atelier Van Lieshout has attained international recognition for objects that balance on the boundary between art, architecture and design. These works of art are practical, uncomplicated and substantial. Recurring themes in the work of AVL are autarky, power, politics and the more classical themes of life and death.
http://www.ateliervanlieshout.com/

And there stands the sculpture by Atelier Van Lieshout: a dark green tower of oil drums, photographed at dusk and surrounded by the economic heart of the city. This sombre photo was the opening slide of a symposium by the Economic Development Board Rotterdam in autumn 2011, about the utility of beauty in the city. A club of men sat around tables, brainstorming about ways to draw international business to the port city. They concluded that a cultural image makes it a more attractive place to establish a business, and recommended touting the raw beauty of the city. In the background shone the projection of Cascade, a work of art that criticises as well as affirms the capitalist element of business.

Two years earlier, SIR had asked Van Lieshout to develop a proposal for the heart of the city. This choice was almost a foregone conclusion. Rotterdam has an international sculpture collection, but at that time it still had nothing by the most famous contemporary Rotterdam sculptor. Furthermore, SIR gave the artist carte blanche to pick a location in the city centre. Van Lieshout chose Churchillplein, the only square without a sculpture along Coolsingel, a street scheduled for transformation into an alluring urban boulevard over the coming years. At present, its main characteristic is being a rather odd place: a main traffic route without an identifiable beginning or end, where roads intersect and the proximity of the River Maas is hidden by tall buildings. A monumental sculpture such as Cascade would be a foretaste of its future grandeur. For now, the main thing was that it should tower up to compete in this environment – gleaming office blocks that project the riches of the business world, the skyline of the dreamed-of metropolis. It was entrusted to Van Lieshout to provide this competition.
The official interpretation of the Van Lieshout sculpture, by the artist himself, concerns that business world: a rickety pile of oil drums as the unstable representation of a collapsing economy. It is a work of art in the classic modern sense of presenting us with a mirror: ecce homo; the world is tottering. From the oil drums hang melancholy figures that attempt to climb this symbolic ladder; some of them falling, others trampled down by fiercer career hunters. Those who wish may read even more into it, noting that none of these homunculi realise that they are made of oil and hence (from a quasi-Marxist standpoint) a raw material in the economic production of big capitalism. Van Lieshout is not one to beat about the bush. In his dystopian Slave City, employees are ground into foodstuff when they don’t perform well.

But above all, it is a real Rotterdam scenario with its oil drums being imported, as it were, into the harbour. That is where Van Lieshout has his studio. If you take a tour with the Spido water bus, you will pass (among all the containers) a strange place of polyester skulls and human figures. In this ‘AVL-Ville’, Van Lieshout lobbied in the nineties for a Free State. That didn’t take off: the Dutch laws made no exception for Atelier Van Lieshout. Despite that, his rebellion bore fruit. It contributed to the formation of a myth – wild parties, spit-roasted pigs, dubious working conditions, and weapons – that continues to propagate. The hullaballoo spread across national borders. Van Lieshout was invited to attend major international art demonstrations. From being anti-authoritarian, he became an authority himself, with his greatest triumph so far the development of the décor for Wagner’s operas in Bayreuth.
And that is what Cascade is mainly about: the self-made cultural entrepreneur Joep van Lieshout. On seeing this sculpture, one recognises the oil industry, but primarily one recognises Van Lieshout. This is because of his recognisable visual language. In his business he has developed a style of anonymous human figures that he executes in the same material – polyester – as his caravans and furniture. As such, his stylised human figures are so typically ‘Van Lieshout’ that each sculpture serves, in a certain sense, as a logo for his business. They have the style that has become definitive in the visual world since the advent of modern art, even though the dripping form of Cascade has a rather different silhouette. Like his other sculptures, however, this one is also extremely photogenic thanks to its simplicity. This is something he has in common with other international art stars – Koons, Hirst and Prince – who use art market mechanisms for their own ends.

Despite international fame, Van Lieshout has intimately connected his image and the course of his life to the port city of Rotterdam. At the end of the last century, he already appeared to be a symbol of this robust city that lagged at the bottom of the good lists and stood at the top of the bad ones. When the furniture manufacturer Lensvelt asked him to design a suite of office furniture, they decided to expand on his rugged image. The cover of the catalogue, filled with desks and chairs, displays the artist as a freedom fighter, chest half bared, on an armed wagon from his ‘Free State’ years that was purchased by Museum Boijmans Van Beuningen. This triumphal chariot and museum piece is a unique selling point that no other furniture manufacturer can emulate.
The metamorphosis from rebellious artist to career maker is going down well with public opinion. In Design and Crime, Hal Foster analyses how Frank Gehry was able to move from his rebellious background to success as a designer of logo architecture, precisely because he was seen as an anarchist. Impious images with an impious past count as doubly daring. The same applies to Van Lieshout. He also creates logo images that are larger than life and immediately understandable – as striking as Gehry’s iconic buildings. With this simplicity he competes with the corporate styles of the surrounding commerciality.

This kind of coming-of-age story is a sign of personal development and, given the idiosyncrasy of the arts, a definite victory in these barren times of individualism. In that sense, Cascade, with its wrestling homunculi, is a self-portrait. Van Lieshout’s success arises from a desire to blossom and rise above the mass, above the anonymous figures that climb up his Cascade. These are the worker ants that fill the world but with which nobody wants to identify. The global economy has such a drastic effect that people lose their grip on their world and their work. They feel tossed around like playthings; in Marxists terms, they are tiny cogs in society. You can see that in the little figures of Cascade. They are faceless figures that strive to survive in a threatening economy. Van Lieshout wins that battle.
It is this bravura and iconic strength that the men of the Economic Development Board Rotterdam support. The projected slide of the Cascade could not have been better chosen. The style of this immediately comprehensible sculpture fits in with the world of business, what it relates to and what it magnifies. The smooth finish and the businesslike Atelier Van Lieshout signature symbolise an entirely different kind of art than that of the lonely artist in his garret. Atelier Van Lieshout is itself big business. It wants to unmask überkapitalismus via that very same capitalism: a large work of art is exclusive, an element of the art market. This victory column does not only commemorate the world of business; it is also a monument to Joep van Lieshout at an A-class location, an 8-metre high triumphal column on a pedestal.