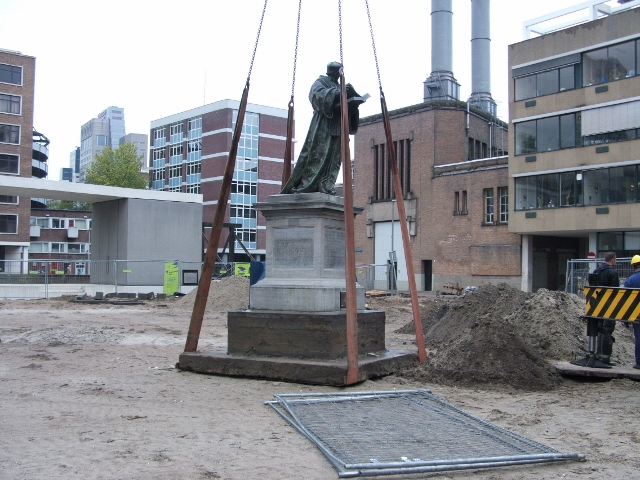 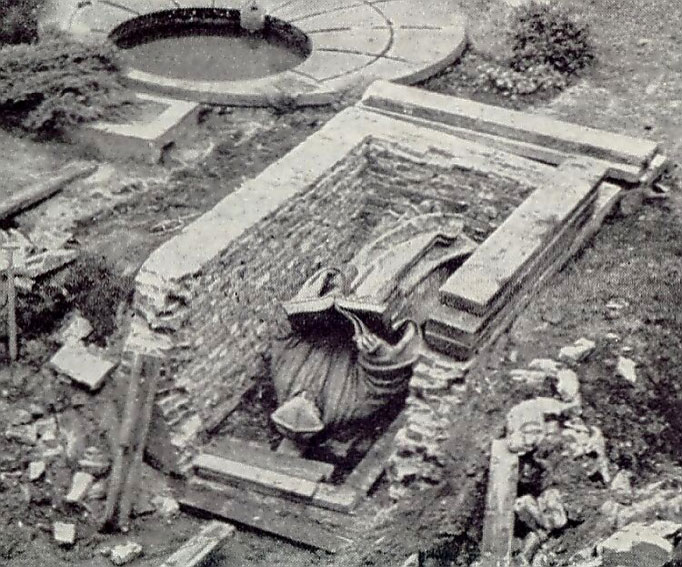 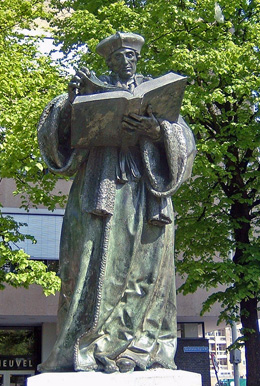 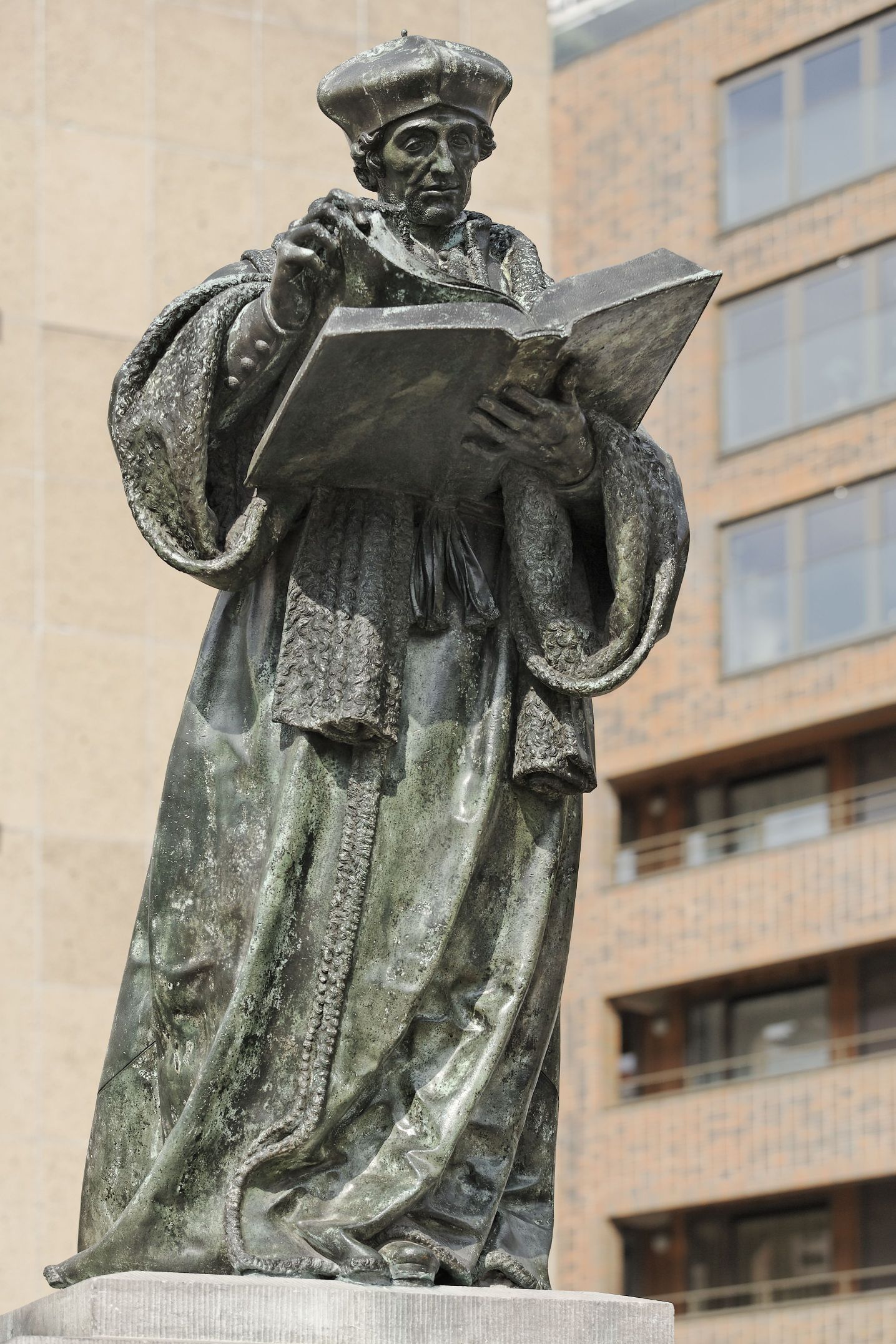 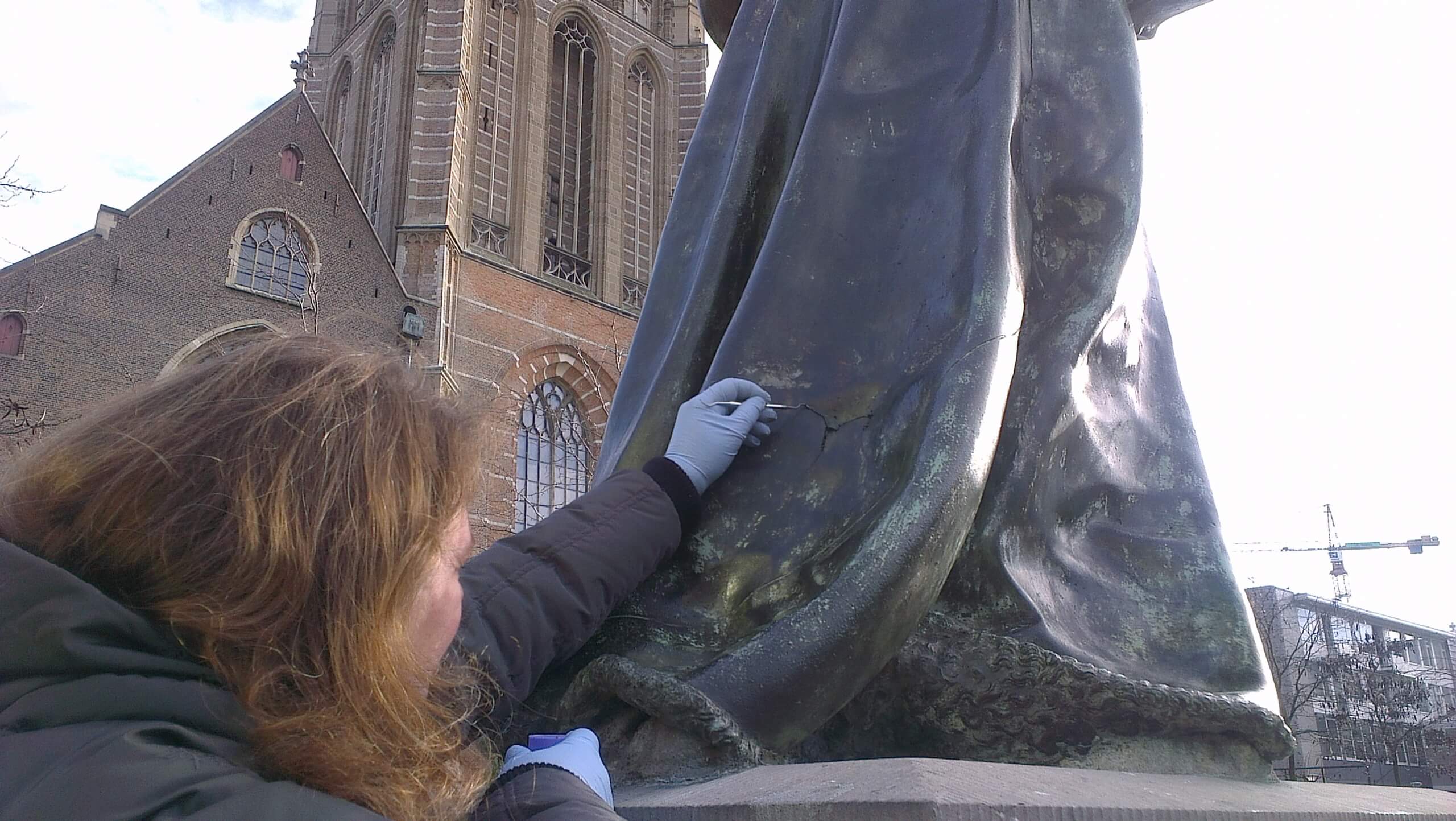 Hendrick de Keyser probably based his bronze sculpture of Erasmus on portrait paintings and drawings made during Erasmus’ lifetime, including those by Hans Holbein the Younger. These portraits show Erasmus wearing a coat with fur cuffs and collar and a characteristic cap on his head. He is frequently shown with a serious expression, either reading or with his hands on a thick book. All these elements can be found in the sculpture of the humanist in Rotterdam.

The bronze sculpture is larger than life-size and towers above the viewer because of its two-metre high plinth. His flowing robes suggest that he is walking forwards. His left hand supports the large book he is reading; he turns the page with his right hand.

When it was first unveiled in 1622 the sculpture had a high sheen. In the course of the centuries the bronze has oxidised and various treatments have meant that at different times the sculpture’s appearance has varied from bright green to a deep black.

Hendrick de Keyser was born in 1565 in Utrecht, the son of the Utrecht-based master cabinetmaker Cornelis Dirxzoon de Keyser. He was trained by the Utrecht-based architect and sculptor Cornelis Bloemaert. When Bloemaert moved to Amsterdam in 1591 de Keyser followed him. Soon after settling in Amsterdam he began to work for himself. In 1594 or 1595 he was appointed official stonemason and architect of Amsterdam. In this post, together with the bricklayer Cornelis Danckaertszoon and the carpenter Hendrik Staets, he was responsible for the sculpture for all public buildings in the city. He worked in a variety of materials including marble and terracotta and designed many reliefs and decorative elements for buildings.

Later, around 1600, de Keyser also made his name as an architect and in 1612 was appointed City Architect of Amsterdam. He became a leading architect of the Dutch Renaissance and is best known for his design of the first official Protestant church to be built following the Reformation. He also built the Zuiderkerk and Westerkerk in Amsterdam (from 1608 to 1611), The City Hall in Delft (from 1618) and many residences.

In addition to decorative sculptures for buildings, de Keyser also made portrait busts and freestanding sculptures. As a sculptor he was greatly influenced by the Delft-based artist Willem van Tetrode. From 1614 until his death in 1621 de Keyser worked on the tomb of William I Prince of Orange (William the Silent) in the Nieuwe Kerk in Delft, commissioned by the States General. The monument to Desiderius Erasmus in Rotterdam is his best-known work of freestanding sculpture.

Three of his eight children, Pieter, Willem and Hendrick II, also became artists. Following de Keyser’s death in 1621 several of his ongoing projects, such as the City Hall in Delft and the completion of the bronze statue of Erasmus, were continued by his son Pieter.

Few Rotterdammers will be aware that the finest statue in Europe (as art historical literature has sometimes claimed) stands in the square in front of St. Lawrence Church; it depicts the most famous Rotterdammer of all times. Most people are familiar with the bronze Erasmus, turning a page in a large book, but only a few of the town’s inhabitants know when and by whom it was made, and what connection the figure with the book has with Rotterdam.

Erasmus, or Desiderius Erasmus Roterodamus as he called himself, was born in Rotterdam on 28 October 1469 (or 1466), though at an early age he attended school in Gouda. His was a restless existence; he lived in various places in Europe and died in Basel on 12 July 1536. Erasmus was the great humanist scholar, who played a prominent part in turbulent religious matters of his times. However, in his writing The Praise of Folly, for which he is still best known, he also scrutinized human behaviour. In the sixteenth and early seventeenth century, the small town of Rotterdam was very much aware that this famous European scholar had been born within its walls. Even when prince Philip, who went on to become the notorious king Philip II of Spain, ceremoniously entered Rotterdam on 27 September 1549, he was ‘met’ by a statue of Erasmus introducing itself as Desiderius Erasmus of Rotterdam who commended the population of Rotterdam to him for his protection.

In 1557, a permanent statue, made of freestone, was erected in the town, but when the Spaniards occupied Rotterdam in 1572, they destroyed the statue and threw it in the harbour. It is said to have been replaced by a wooden statue, but between 1593 and 1596 that made way for a stone version, which in 1614 was described as having been ‘painted over’. Seemingly not satisfactorily, because in 1616 a new statue was decided on; the copper from which it was to be made was located in the councillor’s office. Another world-famous scholar, jurist and classicist, Hugo de Groot (1583-1645) was the instigator. He became pensionary of Rotterdam in 1613. However, he was deported to Loevestein castle in 1619. Later he was to write that he had ensured that Erasmus was cast (in gold) replacing the earlier statue. On 29 August 1618 the Amsterdam city architect and sculptor, Hendrick de Keyser, was commissioned to make the bronze statue, for which he received an advance of 600 guilders.

De Keyser was born in Utrecht in 1565, but moved to Amsterdam in 1591 where he designed a great many buildings, including two churches; the Zuiderkerk and the Westerkerk. Added to which, he was the foremost Dutch sculptor of his time. For this reason he was commissioned in 1614 to execute the tomb of William the Silent in the New Church in Delft. Hendrick de Keyser made a model of the statue of Erasmus which had to be approved. There is a bill, dating from 20 November 1619, which de Keyser submitted for 2,550 guilders’ worth of metal needed for the statue. It included a ‘gun’ metal (bronze as used for bell-making) and ‘red scrap’ (scrap copper). In other words, material which was to be melted down to make the bronze for the statue. However, it was some time before the work was actually cast. Hendrick de Keyser died on 5 May 1621 and the statue was cast by Jan Cornelisz Ouderogge in 1622 in the Artillery House in the Hoogstraat.

Hendrick’s son, Pieter, supervised the operations. Evidently, the overall cost of the statue exceeded 10,000 guilders- a huge sum, compared for instance with what Rembrandt received in 1642 for his Night Watch: 1,600 guilders. Eventually, on 30 April 1622, the statue, weighing 1554 kilos, was placed on its pedestal. In the beginning, the statue must have gleamed in the sun, since it was cast in shining bronze; so much so that Hugo de Groot described it as gold. However, the bronze oxidized quite quickly to become green, its present colour. We see the humanist, enveloped in a thick tabard and wearing the familiar bonnet on his head. Hendrick de Keyser no doubt knew Erasmus’ face from the many portraits painted of him over the years. He is carrying a huge book in his left hand and is in the process of turning over one of the pages with his right. The portrayal is not static; Erasmus stoops forward slightly, as if walking and reading at the same time. It is a depiction of a scholar, absorbed in his material. The statue is more than life size. It makes an overpowering impression, from its great height on top of the pedestal. It was acclaimed from the very start; in the same year, 1622, the famous Dutch poet Joost van den Vondel (1587-1679) wrote a poem: To the splendid metal statue in Rotterdam erected in honour of the great Erasmus. The last lines read: “which was once in stone, but now in metal glows. And thus the envy stirs with pomp and show. And so, with ease, Rotterdam’s revered Erasmus in gold is cast.”

The statue was to have a turbulent history. In 1674 it was stored away provisionally because the bridge on which it stood was in danger of falling down; there was even a proposal to melt the sculpture down or to sell it to the city of Basle, where Erasmus died. Fortunately in 1677 it was placed on a new pedestal, with a translation of the Latin texts made by the Rotterdam poet Joachim Oudaan (1628-1692): “The great Rotterdammer restored to the city of his birth and immortalized in renewed splendour.” Miraculously the statue survived the bombing of Rotterdam in 1940, was then buried in the Museum Boymans gardens and after the war placed at the Coolsingel. In 1964 it resumed its place in front of St. Lawrence Church. The old pedestal, dating from 1677, was replaced by a copy. In the night of 21 – 22 November 1996, the statue fell headfirst off its pedestal, damaging the paving of the square. Damage to the work itself was not very serious and, following careful restoration, the statue was put back in place. Despite the fact that many people were in favour of keeping it inside and erecting a replica outside, to protect the important 1622 artwork from future mishaps.