Everyone is dead but us 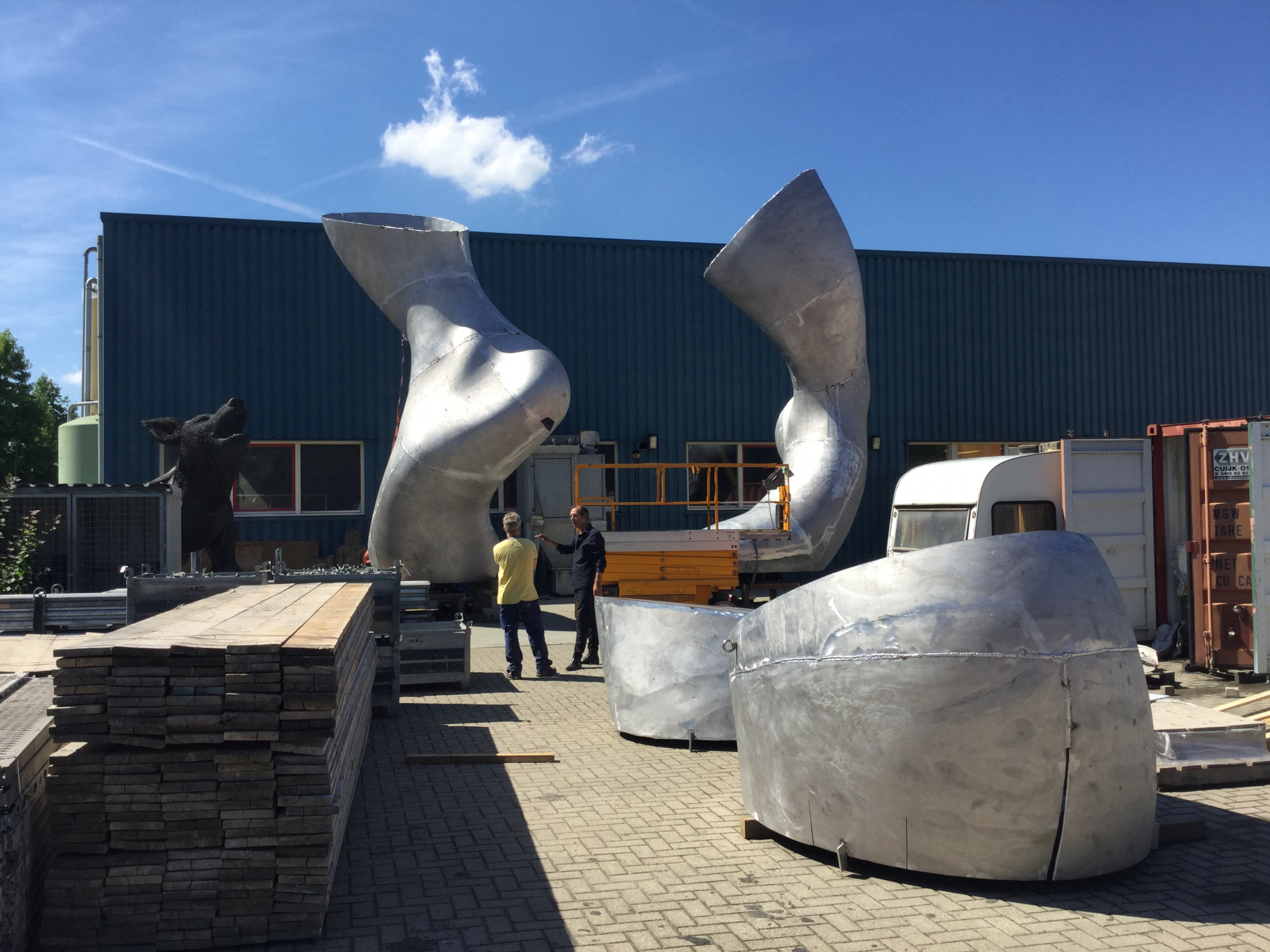 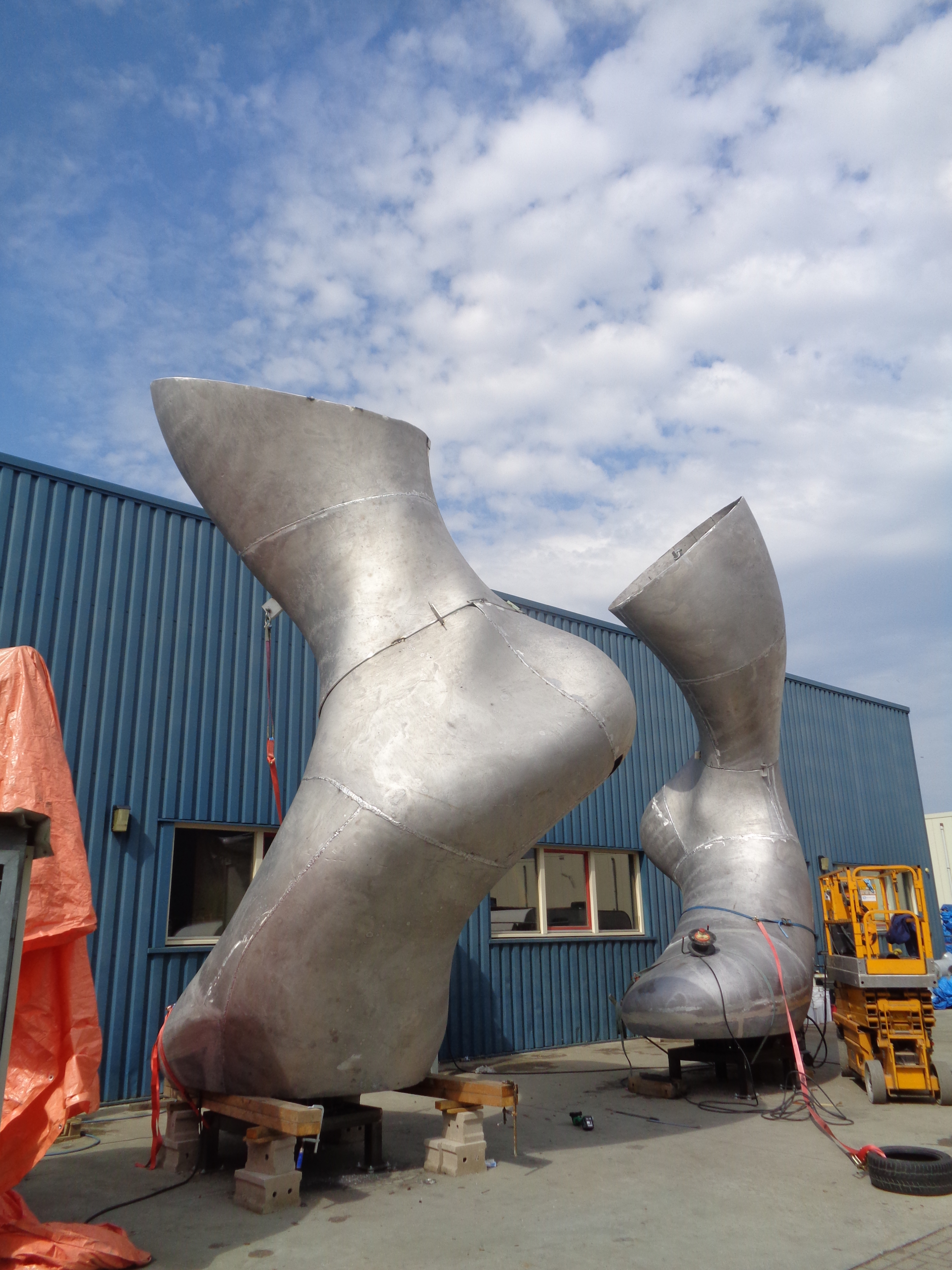 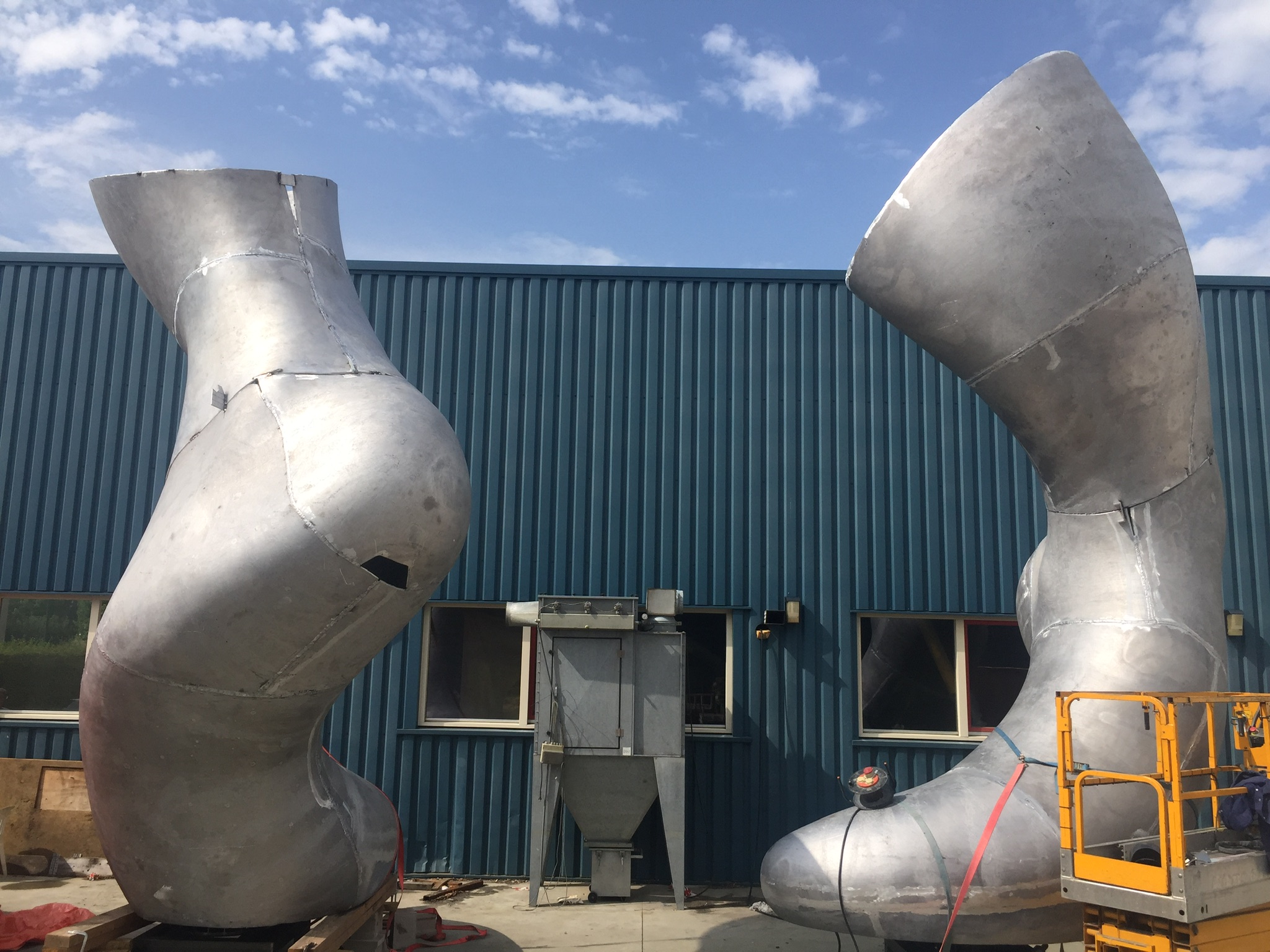 Everyone is dead but us, a new work by the artist Ben Zegers, consists of two, elegantly turned, aluminium feet, each 7.5 metres high, standing on Binnenrotte since 18 September. The feet refer not only to the city’s origin, but also to this spot’s ancient function as a market: the two statues appear as if in dialogue with each other, like a customer and a trader negotiating about the price.

The artwork was cast in parts by the Kemner bronze foundry in Cuikck. Each foot is estimated to weigh 1,500 to 2,000 kg. The aluminium was finished in a variety of ways. The raised heel and the turn of the feet reinforce the spatial impression of the artwork, endowing it with a mobile aura appropriate to the dynamics of the market and the city. The famous work by Edgar Degas, Little Dancer of Fourteen Years from the collection of the Museum Boijmans Van Beuningen, was the model for the relative positions of the two feet.

With the construction of the Willemspoort Tunnel on Binnenrotte in 1991, the remains were found of the oldest lock in the Rotte stream, dating from 1270. Very soon after this archaeological discovery, plans were made to mark this place with a work of art. In 1993, the Rotte Dam Committee, a new citizen initiative, pushed for greater recognition of the dam in the Rotte as the place where Rotterdam was born. In that same year, a Municipal Council proposal to honour the spot with an artwork was adopted. However, it was only in 2007 that a budget was made available for an artwork as part of the Inner Rotte Renovation project, after which the exact location was decided in 2010. The artist was chosen in 2015 by a selection committee consisting of representatives from the municipality and Sculpture International Rotterdam. At the end of 2019, a permit was issued for the installation of the work, and the production of Everyone is dead except us began.

Everyone is dead but us has been installed on Binnenrotte where it joins Hoogstraat: one foot near the library and the other further towards the Market Hall. The installation of the artwork will conclude the new layout of this square, which was completed in 2018.

At Binnenrotte lies the origin of Rotterdam: there, around 1270, a dam was created in the River Rotte (approximately where Hoogstraat is now). The dam was intended to prevent flooding from the River Maas, and not to hold back the small River Rotte. Locks discharged the water from the Rotte into the Maas. Around 1300, there were only a few hundred people at and around the dam, but later the small settlement rapidly grew into a genuine city.

Around the dam in the Rotte a centre with markets developed, and ships from the wider surroundings brought their goods there. After the Rotte was canalised in 1870, and with the development of shops and department stores in the Twentieth Century, street trading declined. However, the market on Binnenrotte is still a centre of activity for two days a week. Ben Zegers’ artwork therefore refers to both the past and the present of this location. 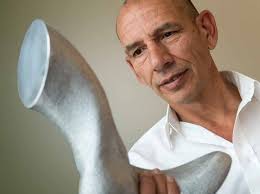 Ben Zegers (1962) ‘disrupts the dimensions of things’. His statues are so elastic in form and content that they ceaselessly change their identity. In that way, they play an ongoing game with the expectations and physical presence of the viewer. Zegers settled in Rotterdam in 1988, and Museum Boijmans Van Beuningen devoted a solo exhibition to the artist in 1993. In 1994, Zegers received the Charlotte Köhler Prize from the Prince Bernhard Fund. Zegers’ works can be seen at various public locations in Rotterdam, for example the Raamvertellingen (Window Tales) in Pendrechtse Melissantstraat, and the Vaart Vrij! monument to trade unionist Edo Fimmen in Katendrecht. His work is also to be found in the collections of Museum Boijmans Van Beuningen, The Hague Municipal Museum, and the Caldic Collection. Ben Zegers is an Executive Board member of the Gerrit Rietveld Academy in Amsterdam, but he still lives in Rotterdam and works there as an artist.

So there they stand. Two feet, created by Ben Zegers. They are very big, quite a presence here at one of the busiest locations in Rotterdam. They have been positioned just like the feet of The Little Dancer by Degas. That one is in the Boijmans Van Beuningen Museum. There it presents a somewhat challenging image, its downcast eyes defying the visitor’s gaze. But these feet are not just for looking at, for being admired from afar. They form part of the movements, activities and labours of the people there on the street. They participate; they are part of what we term the ‘public space’.

The two giant feet here on Binnenrotte don’t stand still; they carry on from where the Little Dancer stops. Not only have they left the museum, they have also started to dance. No idea what they are dancing: is it the tango, the rumba, or a new dance just picked up from TikTok? They take up the swing and show us what it is about: they show us that we have to stay in motion.

Artists have long been fascinated by motion, seeking ways to represent it. The creators of the cave paintings, for example, already suggested motion many thousands of years ago. In the flickering firelight, bison, deer and other animals appear as if in flight across the walls of the cave. Since the end of the nineteenth century we have been able to really record movement. Film was succeeded by television, video and all the digital media of today, displaying each motion and each element of movement in the greatest detail. The puzzle originally solved by the British photographer Eadweard Muybridge with a series of photographs no longer has any secrets for us. The fascination has become an obsession: every sporting event now largely consists of repeats and slow-motion displays of crucial moments and movements. The brilliant side-step, the failed dive of the goalkeeper, an athlete’s final paces just before the finishing line: we can see them in our sleep. Despite the surfeit of moving images, artists still strive to capture the essence of motion. Or, to put it better, they try to freeze the motion, the better to depict it.

That seems rather superfluous. We can speed up any image, slow it, freeze it, and then set it in motion again. The frozen images, however, remain part of an action; they belong with a process which started somewhere, and which can immediately be resumed. No matter how still they stand, they carry in them the purpose which once set them in motion. The dance of these feet is going nowhere; it has no meaning, and knows no goal. Their energy twists them around and puts them under tension, but they remain in place. They are not the image of a movement, but they embody the essence of motion. And we don’t get that essence served up on a plate while we contemplate in a museum; it stands before us, in the middle of our world, amid all the bustle and as part of the daily buzz and turmoil.

Everyone is dead but us: that is the statue’s title. That sounds odd, but I understand it in relation to the energy that is amassed in that sculpture. Art’s fascination with movement has always been an enduring fascination with life. Life as essence, but also life as everyday activity. While works of art may succeed in capturing that life and making it palpable, what we often forget – because we are so busily engaged in it – is that they frequently become alienated from that same life and lose their energy. Locked up in museums or stored away in homes, they become distant memories of a life removed in time and place. On the other hand, Ben Zegers’ two feet celebrate life, precisely where it foams and bubbles. At the same time, they are just statues. They are very big, and a permanent fixture. Other artists who work in public space prefer these days to avoid the inflexibility of statues and directly participate in daily life. Performances which draw energy from the interaction with people and the environment, and which entice observers towards new ideas by placing them in new perspectives. They avoid the neglect and obscurity which threaten permanent artworks in the public domain by involving themselves in the impermanence of events.

This statue will endure: it is a monument to here and now. With that, it distances itself from other monuments which try to eternally remind us of what once appeared to be. Statues of dead white men, who stare despondently at the past which placed them on their pedestals. Men who do not love all the forms of life playing out before them; they look down on them. These two feet do not stand on a pedestal. They are big, but they are not elevated; they touch the ground directly and celebrate the life flowing about them.

The two feet dance to the rhythm of time. Other voices resounded here once, and a different culture was dominant. But the feet listen to the sounds that can now be heard, the voices and atmospheres which now compete in their call for attention; the hidden beat of the here and now. And because they respond to the rhythm of daily life, they have no message. They are here now; they will remain for a while, but they may be gone in the future. They are not trying to prove anything or pronounce some new truth. They only show that there is movement. Always.