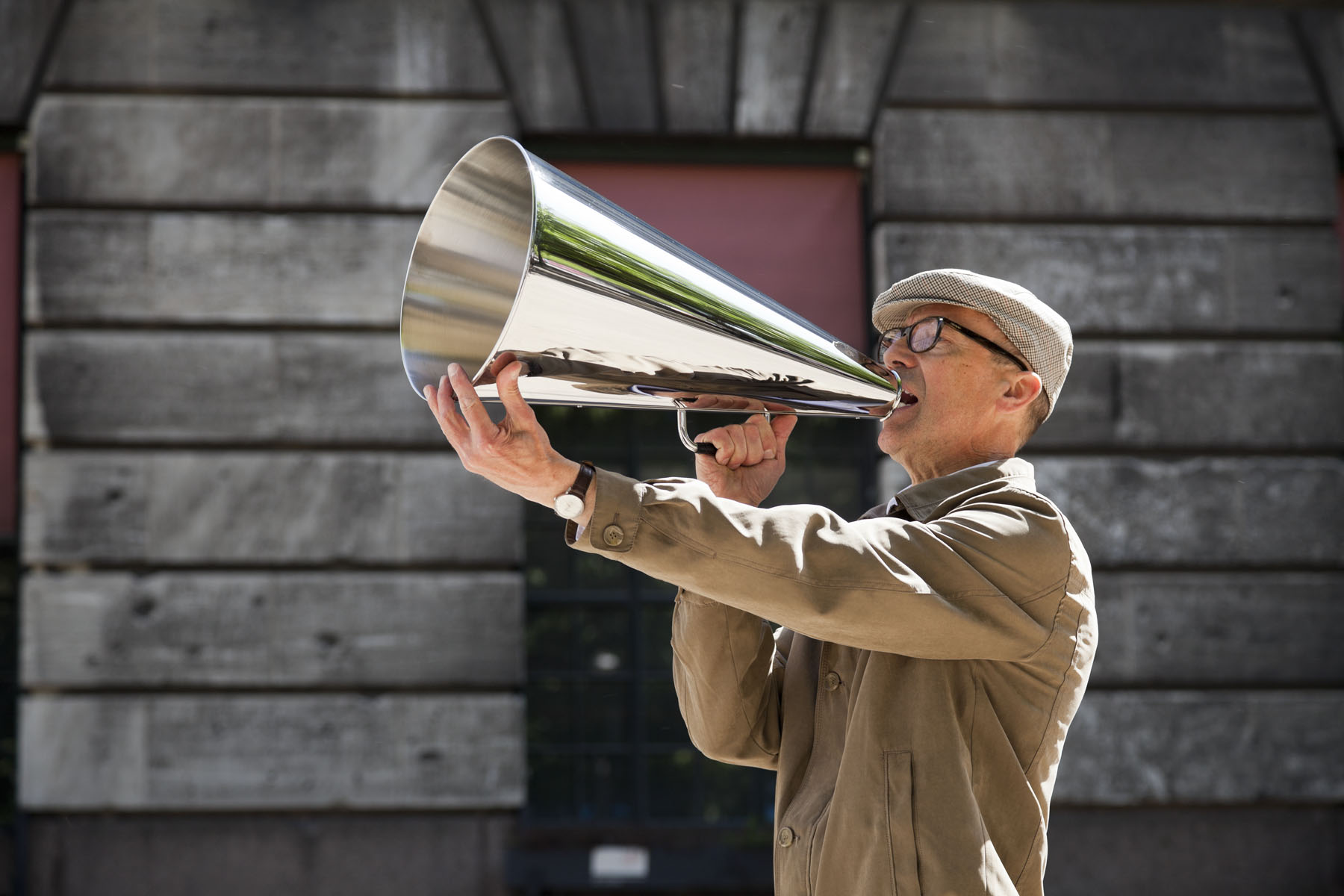 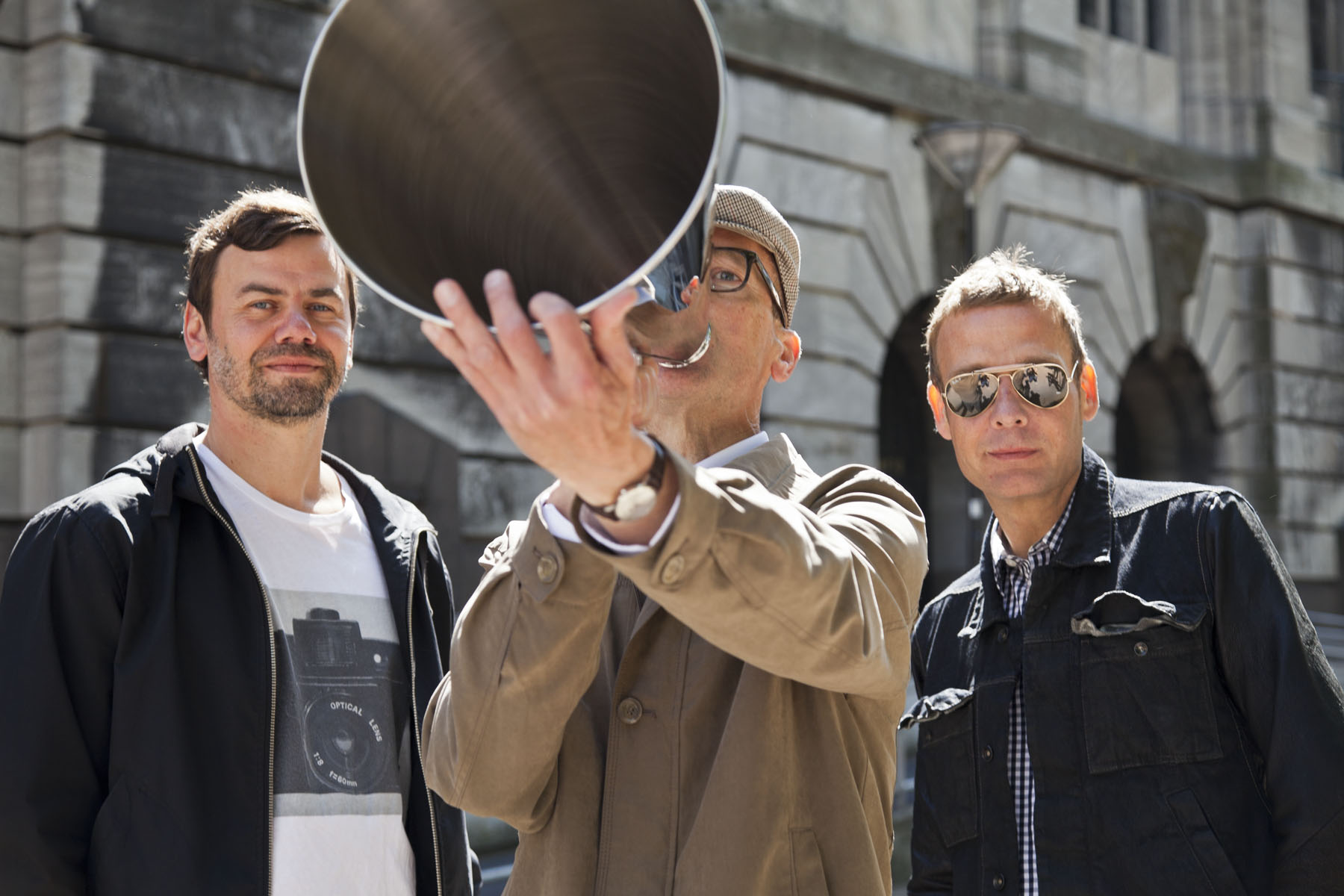 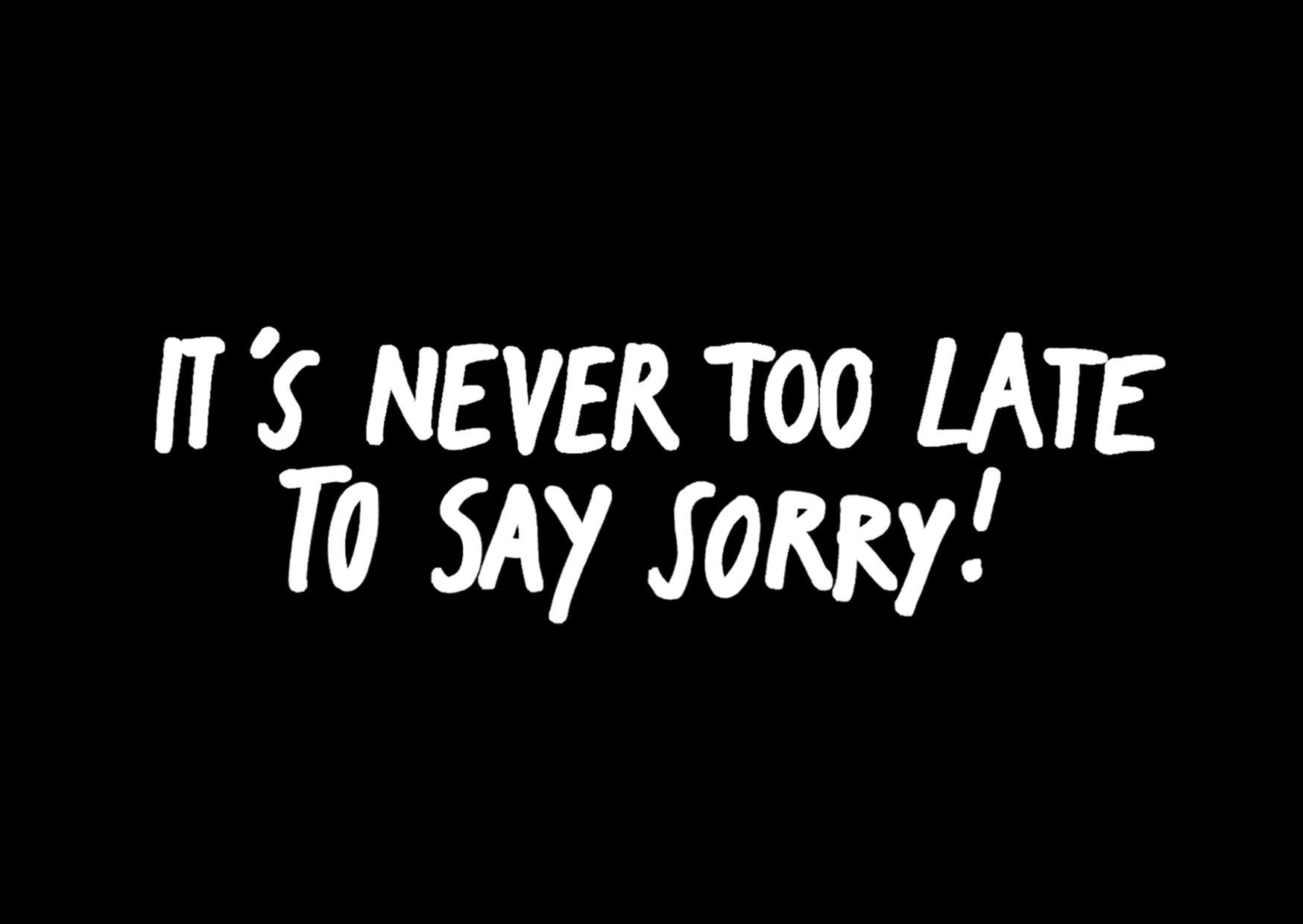 The work of Michael Elmgreen (DK, 1961) and Ingar Dragset (NO, 1968) is characterized by its subversive humour and vision on serious cultural issues.

Commissioned by Sculpture International Rotterdam, Elmgreen & Dragset developed the work “It’s Never Too Late to Say Sorry (2011). The inauguration took place on the same day of the grand opening of the first solo exhibition of this duo in the Netherlands, “The One And The Many”, curated by Museum Boijmans Van Beuningen in the Submarine Wharf in Rotterdam. 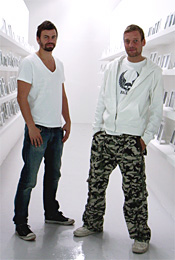 Around 7.5 billion years from now, the sun will destroy the Earth. If humanity’s descendants still populate this planet (an increasingly unlikely scenario, given how enthusiastically we are hastening our own extinction), they will be wiped out in an instant, along with every other species of terrestrial fauna and flora. As maximum life expectancies go, 7.5 billion years is a long time, but it’s nowhere near eternity. There are only so many hours left on the human clock. Best, then, to make our apologies while we can.

Michael Elmgreen and Ingar Dragset’s It’s Never Too Late to Say Sorry (2011) is a work much concerned with time, and the opportunities it presents for penance. Invited to respond to Rotterdam’s busy Coolsingel thoroughfare, the Scandinavian artists installed a display case – part museum vitrine, part minimalist sculpture, part nod towards the thick plate glass and polished granite of sleekly luxurious corporate architecture – outside a former post office building, which had been closed following the ‘liberalization’ of the Dutch mail system in 2009. If the design of this case suggested that it protected some rare and precious treasure, then its contents were decidedly unglamorous: a single, stainless steel megaphone. Why furnish this public space with such an object? Perhaps it wasn’t an artwork at all, but rather an emergency device, like a life belt or a fire extinguisher. Maybe it was an insurance policy against future harm.

The answer arrived at noon on May 28th, 2011, when Wim Konings – a local artist and a part-time postman for one of the Netherland’s various private carriers – unlocked the case, removed the megaphone, and brought it to his lips, intoning the words ‘It is never too late to say sorry’ in a slow, solemn voice. As baffled pedestrians looked on, he replaced the megaphone, locked the case, and then walked off past Rotterdam’s City Hall, to begin another afternoon of delivering mail. Working to Elmgreen & Dragset’s instructions, Konings repeated this gnomic, midday ritual on the Coolsingel for a full calendar year, keeping a diary of 366 ‘sorry reports’ that were later collected in a book.

Watching footage of Konings’ performance, it has something of both the medieval town crier, and of the mystic proclaiming visions in the ancient marketplace. Such forms of public address are very rare in 21st Century urban life. Konings does not try to persuade passersby to buy a hot dog, or to vote for a political candidate, or to donate to a charity, or even (for all that his language resembles a Bible verse) to embrace Christ as their saviour. He makes no case for his claim that ‘It is never too late to say sorry’, preferring repetition to explanation, as though by stating it again and again he might somehow wear it into city’s very paving stones, like a groove in a vinyl LP. From his tone of voice – dignified, unhurried, but hardly enthusiastic – it’s not even clear whether he agrees with what he’s saying, or simply playing the messenger’s part.

‘It is never too late to say sorry’. Is it really? Sorry to whom? Sorry for what? Who should say sorry, anyway? This statement is neither indisputable, nor detailed, nor does it (we should note) constitute an apology itself. These apparent deficiencies, however, are exactly what give Elmgreen & Dragset’s work its strange, nagging power. Konings’ words might apply to any misdeed, from the most serious to the most trivial, and we begin to imagine a whole history of potential human apology, in which every member of our species issues a mea culpa, whether they are confessing to bloody war crimes, or the late return of a library book. It’s Never Too Late to Say Sorry might, of course, be interpreted in strictly local terms (Rotterdam is not without its own tensions, particularly around immigration) but at base this is a work that would still function were it to appear in the Rome of Julius Caesar, or the Xanadu of Kublai Khan.

Was Konings offering the pedestrians on Coolsingel absolution? Not quite. If an apology may be accepted, then it may also be refused. ‘Sorry’ is not a magic word, or only insofar as it transforms the person who speaks it. Sometimes it really is ‘too late’ to make amends to those we have wronged (the dead, after all, have no ears to listen), but as long as we ourselves draw breath, then there is still the possibility of atonement. If Elmgreen & Dragset’s work is about reconciliation, then it is about how we might become reconciled to – and perhaps with – our own guilt. This, though, depends on us listening to Konings. Like all late capitalist cities, the streets of Rotterdam are full of messages, most of them promising that a better world is only one more purchase away. Against such a backdrop, what is the chance that this town crier – this mystic – will be heard?

If Konings’ daily performance recalls the myth of Sisyphus, a man fated to spend eternity rolling a boulder up a hill, only for it roll back down each time he reached the summit, then it also echoes a passage from Herodotus’ Histories (440BC) about mounted messengers in the First Persian Empire, famously adopted as the unofficial motto of the United States Postal Service: ‘Neither snow nor rain nor heat nor gloom of night stays these couriers from their appointed rounds’. Unlike the private mail carrier that employs Konings, the USPS is a state-owned Federal Agency. We might wonder which of his two daily rituals made him feel more like a public servant: delivering Rotterdam’s post, or simply reminding its citizens that there is still time to apologize?

During the 366 days in which Elmgreen & Dragset’s work played itself out on the Coolsignel, humanity travelled once around the sun. There are still some 7.5 billion years left before it burns us to a crisp. We can put off saying sorry for a little longer, but sooner or later, it will be time to atone.