La Grande Musicienne by Henri Laurens represents a kneeling woman playing a lyre. Laurens made the original plaster sculpture in 1938. The bronze version, which is part of Rotterdam’s sculpture terrace, was cast in 1963. It is now seen as a key work in the artist’s oeuvre and an important example of early Cubist sculpture.

Looking at the sculpture it is clear that in 1938 Laurens had already abandoned a strict Cubist approach and had adopted a more lyrical style. In this sculpture he is no longer concerned with simultaneous representations of various viewpoints or components but with rearranging forms and allowing them to flow, and with the sculptural tension evoked by the heavy sensuous forms. All the forms flow into one another: from the generous curve of the hips, the sickle form of the arm, and the strings of the lyre, to the point of the elbow. It is only in the back that we encounter a deep groove that delineates the left and right sides. The back forms a central fulcrum around which the other elements turn. This movement invites us to examine the figure from all angles.

The sculpture was cast with the utmost care. The surface is smooth and has a dark, which optimise the even reflection of light. 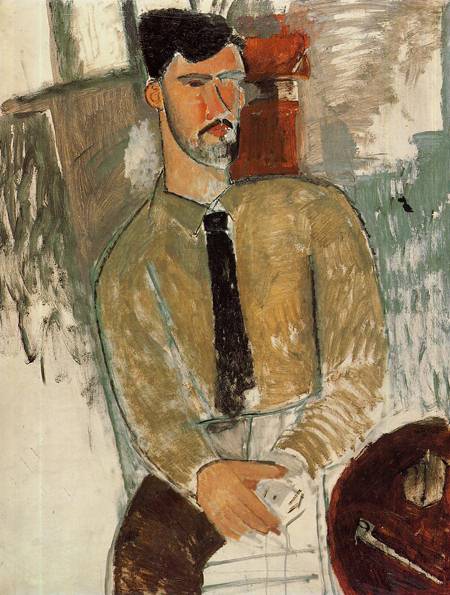 Henri Laurens was born in 1885 Paris, where he lived and worked until his death in 1954. He studied set painting and sculpture and took evening classes in drawing. After meeting the Cubist artist Georges Braque in 1911 he adopted the Cubist style. He made collages, reliefs and sculptures in polychromed wood, plaster and metal in which he attempted to give spatial expression to the paper collages of the Cubists Braque and Picasso. He applied colour to his sculptures in order to neutralise the effects of light on his works.

Initially Laurens’ formal language was rigidly geometric but after 1921 he created more organic forms. At the end of the 1920s his figures -whose strength resided in their simplicity- became rounder and fuller, achieving a monumental compactness. Laurens gradually shifted further and further away from Cubism. The female figure (often from classical mythology) became his principal theme. However, his works were not narrative but were concerned with strictly plastic problems such as the ordering of forms and volumes.

As appreciation of his work grew at the end of the 1930s he was able to afford to make larger-scale bronze works. In addition to sculpture, Laurens also illustrated books including volumes of poetry for his friends. In 1949 and 1962 his work was shown in solo exhibitions at the Stedelijk Museum in Amsterdam. In 1953, a year before his death, he received the sculpture prize at the São Paolo Biennale. Laurens is buried in Montparnasse Cemetery in Paris.

The Sculpture Terrace shows a series of different sculptural approaches to the human figure. Rodin’s bronze is relatively realistic, whereas the works of Mastroianni and Wotruba (a couple and a reclining figure respectively) were given a highly abstracted form. Shapiro’s and Visser’s works test the associative power of construction and assemblage. La grande musicienne (the large musician) by Henri Laurens, the oldest sculpture but one on the sculpture terrace, takes more advantage of the plastic possibilities of a basic geometric form than any of the other works present. Laurens has combined the motif of the female figure, melded together with a lyre-like musical instrument, with the form of a spiral. At the back a deep groove runs across the length of the sculpture. At the front of the bronze the zigzag shape of the spiral is the most pronounced. Spherical forms, which evoke associations with (female) parts of the body like legs, buttocks, breasts, a head and an arm, spiral and flow into one another, thereby creating ‘the large musician’ from the extremely elegantly modelled volume. In order to attempt to fathom the construction and complexity of the form, the viewer should certainly walk around the sculpture several times; something one feels compelled to do anyway because of its sculptural spinning movement.

Laurens’s early work from around 1915 belongs to Cubism. One of the characteristics of Cubism is the artists’ modelling on a certain basic pattern, a grid. As a result Cubist compositions follow their own rules and have little to do with imitating reality, although there are points of reference such as associative forms and the occasional realistic detail. Initially Laurens made small, collage-like sculptures and reliefs similar to those of Braque and Picasso. During the 1920s the Cubist idiom with its facet-like and geometric language of form gradually gave way to round shapes and curves and the female nude became Laurens’s major theme. His work ultimately had more in common with that of Matisse than with his Cubist counterparts. The pronounced groove or spine, which splits the Rotterdam sculpture into two at the back acting as a compositional resting point, is an invention which Matisse used – he in his turn was influenced by the formal rigour of Cubism – much earlier in a series of large reliefs of a female nude seen from behind. La grande musicienne, undoubtedly a highlight in Laurens’s oeuvre, has only the formal approach and the melding of volumes still somewhat similar to his earlier Cubist work: the voluptuousness and inviting curves completely contradict Cubism. Or, as Laurens once described his later activities: ‘I strive for the ripening of forms. I would like to make them so full of juice that they couldn’t hold anymore.’

The aim of the Urban Embellishment Committee was to purchase work from the pioneers of modern sculpture. The Laurens was actually second choice. A given was that the sculpture, regarding subject matter, should be in keeping with the new Doelen Concert Hall that would be completed in 1966. Initially, Le chant des voyelles (The Song of the Vowels) caught the committee’s attention, a late work by Jacques Lipchitz, one of the major sculptors of the Cubist era. However, it was snapped up by the Kröller-Müller Museum in Otterlo. An alternative was found in Laurens’s La grande musicienne. This sculpture also conformed just as much to the thematic and art historical requirements, even though Laurens’s later work – like the intended Lipchitz sculpture – could no longer be considered Cubist.

Laurens began to make sculptures similar in size to La grande musicienne in the 1930s, which partly coincided with the increasing recognition of his work. He made a small sculpture of the same motif in 1937, a year later the original plaster followed for the larger version. It was only after his death that it was cast in bronze a few times. In 1962 such an example was on view at the large retrospective of Laurens’s work at Amsterdam’s Stedelijk Museum. The purchase of the sculpture in 1963 by Rotterdam Council went markedly quicker than the choice of location. Until 1966 the Boymans-van Beuningen Museum took care of the work. Then it stood for a long time protected on the patio of The Doelen, since there was some doubt whether the relatively small sculpture would be in proportion to the size of the building if it was placed outside. When the bronze sculpture was finally placed on the square in front of the concert hall it quickly became something for cyclists to lean their bikes against as well as a spot for left litter. Added to which, The Doelen itself was radically extended so that an appropriate location for the sculpture at this venue seemed increasingly unattainable. Partly for this reason, Laurens’s musician has now been moved permanently to the sculpture terrace at Westersingel.