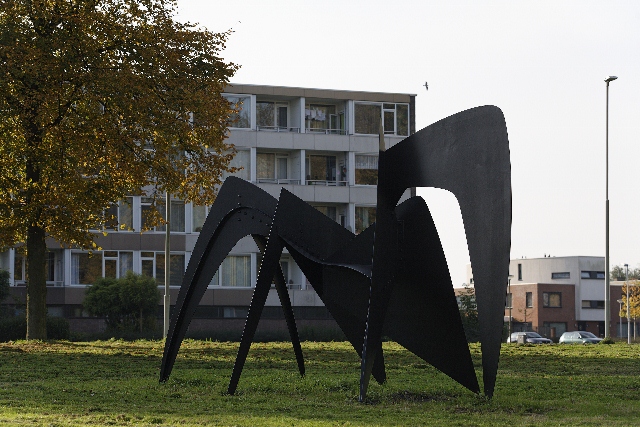 Alexander Calder made Le Tamanoir (The Anteater) in 1963. Since 1965 it has been sited at the corner of the Aveling and the Venkelweg in Hoogvliet. The sculpture consists of stylised forms cut from steel plates, attached by enormous bolts to form a monumental spatial construction.

Calder’s first large-scale sculptures were ‘mobiles’, constructions that could move in the wind. The heavy bases for these mobiles eventually developed into sculptures in their own right known as ‘stabiles’. Le tamanoir is a stabile.

Not many people will immediately think of an anteater when they see this sculpture, but once you know the work’s title then the animal’s characteristic head, large feet and arched hindquarters become recognisable. The sculpture does not represent the anteater’s anatomy exactly but in a stylised manner.

Calder’s construction technique was not traditional within fine art, but came from his background in mechanical engineering. 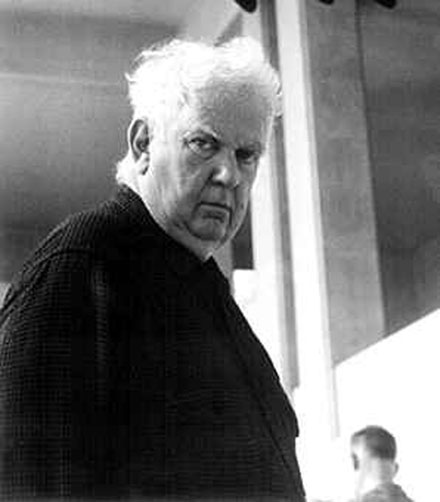 Alexander Calder was born in Lawnton, Pennsylvania in 1898. He came from an artistic family: his mother was painted and both his father and grandfather were respected sculptors. He initially trained as an engineer but then studied art at the Art Students League in New York from 1923 to 1925. He moved to Paris in 1926 in search of contact with the avant-garde and befriended artists including Joan Miró, Jean Arp, Fernand Léger and Piet Mondrian who set him on the road to abstraction.

Initially Calder made sculptures from wood and metal wire. Around 1931 he made his first mobiles, with which his name has been associated ever since: flat plates of metal connected by wire that move in the air. A little later he developed stabiles: static constructions of interlocking metal plates. In the 1960s and 1970s Calder produced both stabiles and mobiles at a monumental scale. The majority of his works have biomorphic forms; some represent animals, whether real or imagined. Colour played a central role in Calders sculptures, which were painted in a limited palette of the primary colours combined with black and white.

Calder spent the rest of his life between France and America. He died from a heart attack in October 1976, shortly after the opening of his retrospective exhibition, Calders Universe, in the Whitney Museum in New York.

Thanks to its title, the sculpture is recognizable as an anteater, with its high back and typical tubular snout touching the ground, nosing. Without this title, the sculpture could be an abstract construction and the snout one of the seven supports on which it stands. Since he made his first works around 1930, the choice between abstract and figurative art was never an issue for Alexander Calder. On this point he is similar to his friends Joan Miró and Jean Arp. Like them his work, with its poetic, biomorphic shapes, refers to the animal and plant world.
The boundary line between abstract and figurative is translated by Calder into a play on dimensions – somewhere between one-dimensional drawings and three-dimensional sculpture. In his work there is always an interaction between flat and spatial components. He constructs a shape, for instance, by placing two circles at right angles to each other. Le tamanoir, too, is made from flat elements that are put together at various angles. Viewers are expected to use their imagination to see the space between the flat forms as part of the whole. In the three-dimensional construction the depiction of an anteater is thus created on a monumental scale. Calder initially trained as an engineer, but gradually he was drawn towards art. He began as an illustrator and together with his wife, from 1926 on, lived for long periods of time in Paris, where he became friends with artists of the avant-garde who had gathered there. It was within this circle that his figures, portraits and caricatures made from wire first drew attention. Especially his ‘circus’, a hodgepodge of tent poles and striped canvases, a ring, animals and their tamers, trapezes and acrobats all packed in a few suitcases, was very successful. Once his circus was displayed he performed as the ringmaster.

Calder made his debut in the Paris art world in 1932 with an exhibition at Galerie Vignon. He showed geometric three-dimensional constructions which could be moved by hand or motor power. With these Calder appeared to be aligning himself with Constructivism, except he softened its rigorous abstraction with playful references, such as a ‘solar system’ with ‘planets’ circling around. The transition in Calder’s work towards a geometric language of form is linked to a visit he made to Mondrian’s studio in 1930; where he was impressed by the coloured rectangles Mondrian had put up on the walls.

Influenced by the Dutch artist, Calder wanted to depict the systematic order of nature in his work, but in a more dynamic form. Movement and balance rather than a static order were his points of departure. Calder changed to placing his geometric forms in space, as he had seen in sculptor Naum Gabo’s work, and then adding movement. At the exhibition in 1932 it was Duchamp who coined a name for these works – mobiles. When Arp heard about this later, he asked Calder: ‘And what are those things you made last year then? Stabiles?’ Since then both terms have been used to describe Calder’s work, even his later sculptures. ‘Mobile’ in particular has become a popular term, just as accepted as ‘sculpture’ or ‘painting’. It is now used to identify works which brought Calder fame at the end of the 1930s – coloured shapes arranged in groups delicately suspended from a wire construction and, according to the rules of chance, moving in the wind or air currents. In these mobiles the influences of Arp, Miró, Mondrian and Gabo on Calder, while in Paris, come together. According to the philosopher Jean-Paul Sartre, in Calder’s confident engineer’s hands, ‘objects [were created] that only relate to themselves, defined by their movement which they receive from nature and reproduce it at the same time’.
Since mobiles are dependent on wind they function better placed outdoors, so Calder also designed the plinth onto which the moving parts could be attached. From these upright constructions later monumental stabiles like Le tamanoir were developed. This sculpture dates from 1963 at a time when Calder was regarded as one of the leading artists of his generation. He participated in major exhibitions in Paris and Amsterdam and at the Documenta in Kassel, where Le tamanoir was shown in 1964. The sculpture was purchased at the Galery Maeght in Paris by Rotterdam Council for the new suburb of Hoogvliet, which thanks to the newly launched Percent for Art scheme could be embellished with a series of artworks. It is Calder’s only monumental work in the Netherlands and because of its siting in a suburb is hardly known at all.

The confirmation of Calder’s status as an artist was the large-scale retrospective of his work in 1964 in New York’s Guggenheim Museum. While Calder was inspired before the war by his friends in Paris, after 1960 he himself was the inspiration for developments within kinetic and Minimal art. Despite their uncompromising machine-like appearance, the constructions of George Rickey that also move in the wind are related to Calder’s poetic mobiles. And the emphasis artists like Anthony Caro and Richard Serra place on the construction and formal qualities of their material was motivated by Calder’s engineer’s approach to his large metal stabiles. Even a more recent sculpture like Rotterdam’s Maas Sculpture, with its post-modern deconstruction by Auke de Vries, recalls the fragmented arrangement of Calder’s work.

The timeless aspect of Calder’s art can be traced to his unwillingness to choose between geometric abstract forms and sculptures derived from nature. It is the meshing of these two approaches that gives his work its highly poetic quality.