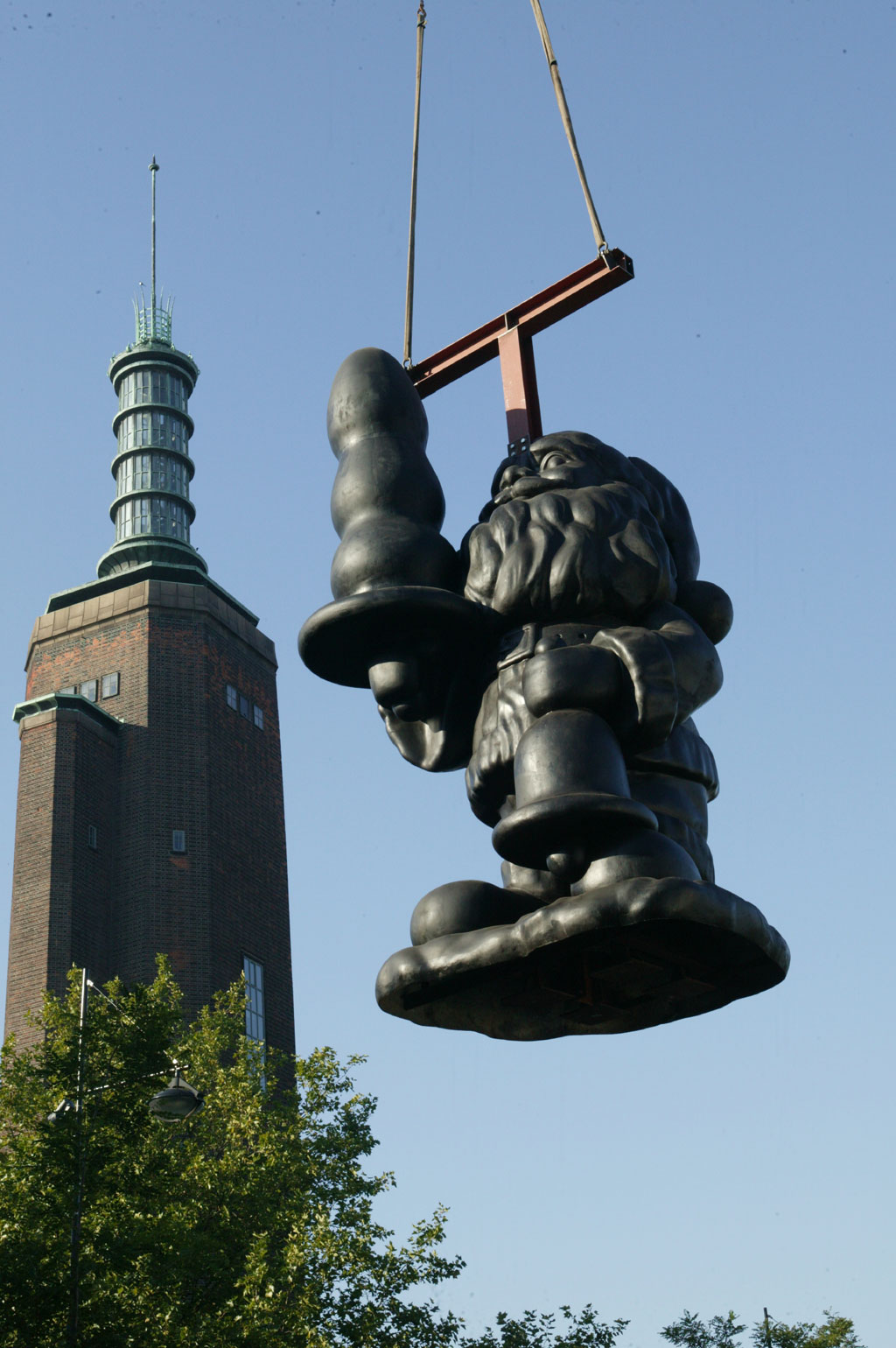 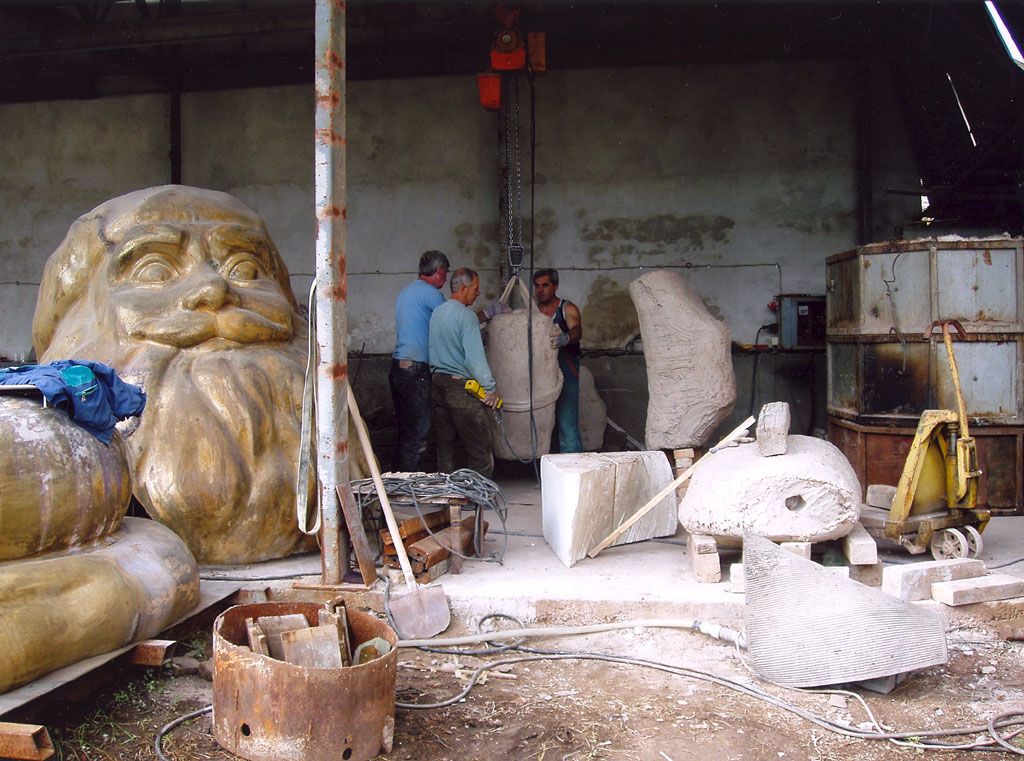 Santa Claus in bronsgieterij in Sophia 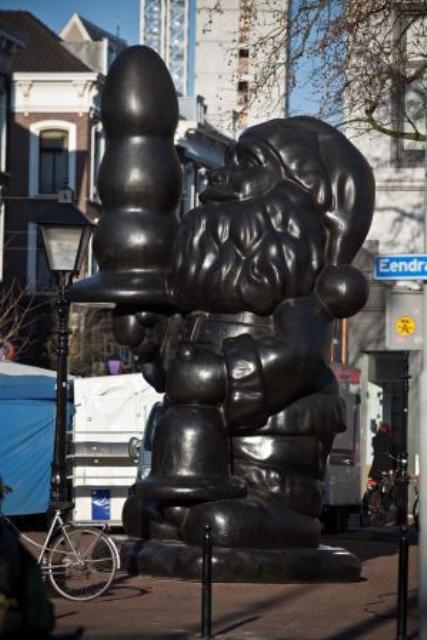 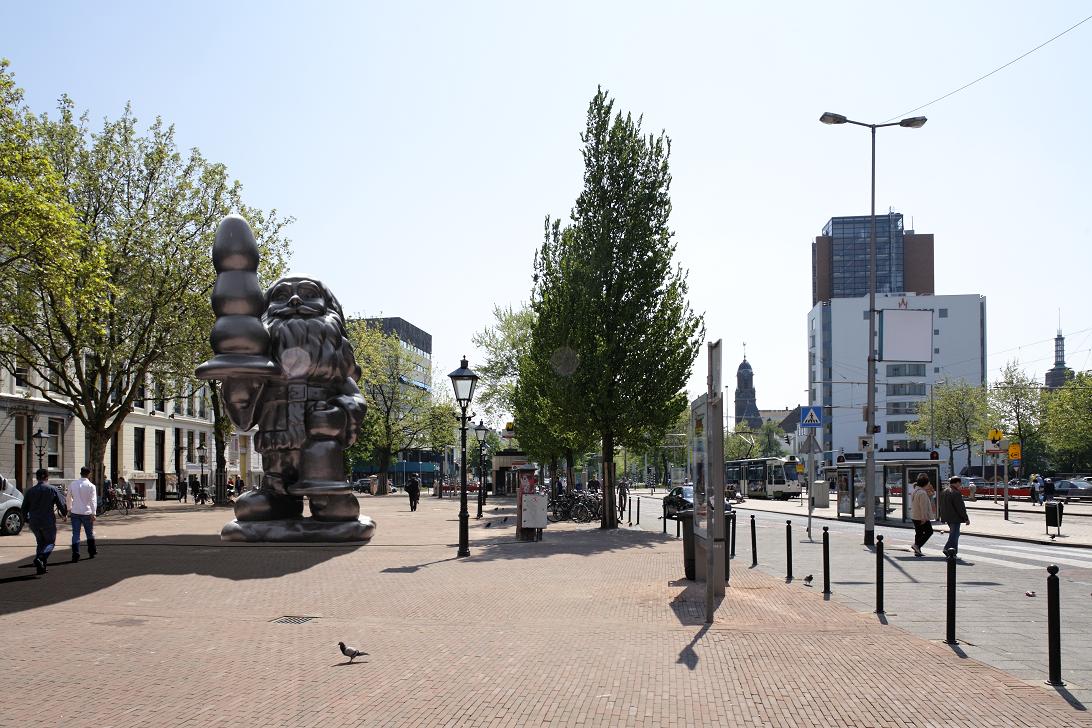 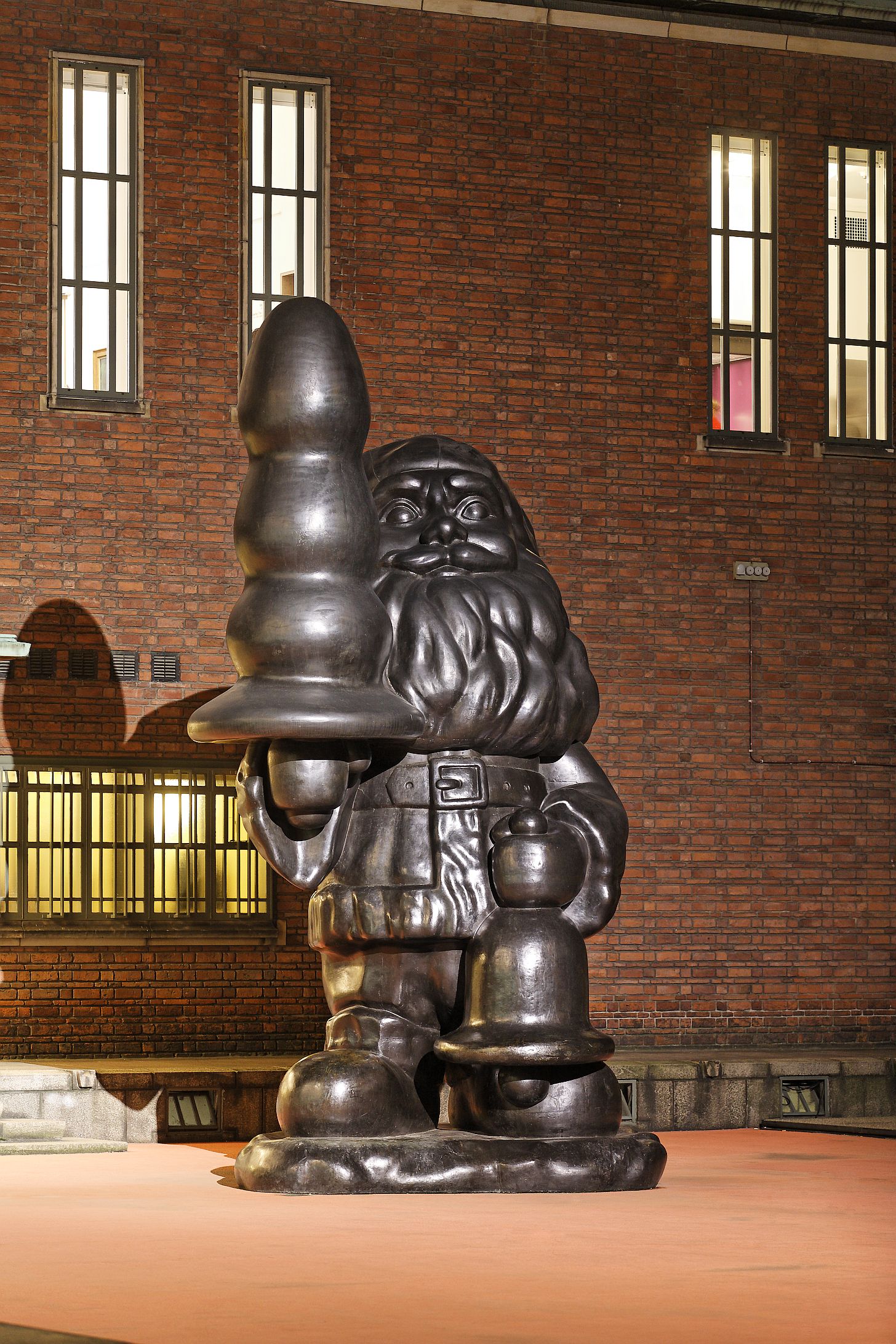 Santa Claus stirred up the biggest local art scandal of the last few decades -and yet it looks so friendly and benevolent! What is the problem? This Santa Claus is holding not a miniature Christmas tree, but a sex toy; a butt plug.
When the politicians and the general public learnt of that, a long debate began that extended far beyond the national boundaries. Some found it tasteless and offensive, while others considered that a hypocritical point of view in an era permeated by commercial sex. Is this élite taste terrorism, or should art stimulate the debate? And should it be allowed in the street, or would it not be more in place in the closed setting of a museum?

Of course, this being the Netherlands, money came into the debate. The sculpture cost 180,000 euros, which is not much for a large work by McCarthy. The US artist is regarded as one of the leading lights of the art world. The low price was secured through the keen bargaining of Joop van Caldenborgh, (former) chairman of the committee.
In the meantime the sculpture has been shifted from one location to another in the city like a hot potato. In the end Museum Boijmans Van Beuningen offered it a haven, as it had done earlier for other sculptures.
It is to be hoped that one day it will be given a location in a busy shopping street. McCarthy’s Santa Claus is the bronze king of instant satisfaction, symbol of consumer enjoyment. The design of the sculpture combines high and low culture. Will Rotterdam ever become endeared to ‘the gnome with the butt plug’, as happened with other controversial sculptures in the past? If indignant residents were to have their say, Zadkines sculpture would not be there either.

From Zadkine to McCarthy, a guide to the Rotterdam International Sculpture Collection 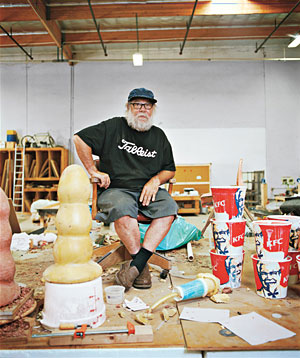 Editor’s note: The following essay by Pol van Dinsbergen was written at the time that the sketch design was known, and when the intention was to use a red Santa with a green ‘Christmas tree’ instead of the black Santa which McCarthy ultimately ended up creating for Rotterdam.

The work of American artist Paul McCarthy is often repulsive, but a Grand-Guignolesque humour trickles through the rankness. McCarthy displays what culture generally suppresses – excrement, a whole sewer of vile fluids, perverse sexuality – and stages all of this in a manner that tosses the beholder back and forth between distaste and liberating laughter. McCarthy began his career in the late 1960s with performances. These often stemmed from the action painting of Jackson Pollock, but were perhaps more of a commentary on Pollock’s oeuvre: a naked McCarthy daubing a wall with paint in a rather aggressive manner, for example, imbuing the act of painting with an element of childish vandalism, like a vulgar, shameful act. While Pollock was revered by many as an heroic modern artist, McCarthy was hereby highlighting the retrogressivity of his drip and splash technique. To McCarthy, abstract expressionism was not heroic self-expression, but a form of soiling and destruction.

The performance art of the early 1970s was harsh: artists such as Chris Burden and Marina Abramovic used themselves as guinea pigs in experiments that were terrible ordeals, both mentally and physically, and the latter sometimes even extended to self-inflicted wounds. McCarthy, however, was by this time coming to the conclusion that he was not striving after that level of realism: he thought ketchup was a really good substitute for blood. He was more interested in performances that were psychologically confronting than in pushing personal boundaries by enduring such extreme conditions. For this he devised a wholly personal approach, creating a corporal and often deeply disgusting spectacle using ketchup, mayonnaise and other foodstuffs in combination with fairly unsavoury acts. An early example of this idiosyncratic approach was the 1974 performance Hot Dog, which involved, among other things, a naked McCarthy sticking his penis into a hotdog bun, drinking ketchup and stuffing hot dogs into his mouth, which he then bound shut, introducing the peril of vomiting and asphyxiation.

In the early 1970s, McCarthy started to record his performances on video. In 1984 he stopped giving these performances in front of an audience, though he continued to make videos based on performances. These videos are often shown in installations: the sets of his performances. Some of these works were created in collaboration with Mike Kelley, such as the Heidi video installation from 1992. This work juxtaposes the idealised image of a simple, pure life in the Alps as portrayed in the Heidi novel with McCarthian scenes that are enacted against a backdrop which is a cross between an Alpine chalet and Vienna’s American Bar, a design by Adolf Loos. In Heidi and in almost all McCarthy’s performances and videos from the mid 1960s, McCarthy works with party masks, rubber prostheses and doll-like figures. This is all part of McCarthy’s approach to performance art: it is not about the artist himself, as is the case with most other ‘performers’; by performing with a mask on McCarthy is essentially transformed into a grotesque Everyman, a character everyone hopes they do not resemble.

McCarthy first achieved international success in the 1990s, thanks in part to his projects in collaboration with the younger Mike Kelley. The figurative sculptures that McCarthy produced during the 1990s drew plenty of attention, too. Sometimes they move, like the audio animatronics in Disneyland: Forest (1991-92) is a forest backdrop in which a man with his pants around his ankles copulates with a tree, while a boy is busy bonking with a hole in the ground. Cultural Gothic (1992) is a sculpture of a boy who is humping a goat, his father’s hands posed paternally on the child’s shoulders. Works like these reveal that McCarthy’s derision is not first and foremost directed at the sublime pretensions of ‘high art’ but rather at the commercial mass culture that he, like every American, is confronted with every day – most especially in its Disney variant, which creates a blemish-free, cheerful make-believe world. McCarthy is the dark mirror image of the child-friendly Disney. McCarthy exposes everything that has been barred from the happy world of Disney and company in abundance: sexuality, corporality, the ‘low’ and abject. He makes rapacious use of what he is resisting, such as the visual idiom of animated cartoons and amusement parks. The doll-like Spaghetti Man sculpture from 1993 is a figure with a cartoonesque rabbit’s head and an interminably long, tendril-like penis; the Apple Heads from 1994 also have cartoon heads (now in the guise of enormous apples) and outsize genitalia. These are works that subvert the cuteness of cartoon characters, but they also exploit that cuteness to their advantage.

Something similar applies to McCarthy’s project for Rotterdam: a substantial sculpture of a roguish Father Christmas, alias Santa Claus. Even this kitsch character who is so ubiquitous in December receives the McCarthy treatment: he carries a big Christmas bell and brandishes an elongated green form, in which with the best goodwill one can discern an abstracted Christmas tree, though above all it seems to be a strapping butt plug. Children in the Netherlands do not believe in Father Christmas (though they have their own mythical incarnation of St Nicholas in the figure of Sinterklaas, who arrives bearing gifts in early December), but we are certainly familiar with him as the icon of an American culture industry (the manufacturers of ‘image culture’) that is making ever-greater inroads here. It is above all a form of self-criticism vis-à-vis this culture industry that is made manifest in this ambiguous Santa Claus. In Western society, where Father Christmas has primarily become an instrument of commerce, McCarthy’s cultural relativism offers a refreshing voice of dissent. In this sculpture McCarthy exposes the falsehood of commerce and tarnishes a dominant aspect of American culture.

Perhaps it is no coincidence that McCarthy’s Santa Claus evokes memories of the Debiteuren Crediteuren (Accounts receivable, accounts payable) episode of the absurdist Jiskefet television comedy series (perhaps most akin to the British series The Office), in which Sinterklaas molests one of the office clerks. Even though McCarthy has been almost completely ignored by the Dutch art world, his approach dovetails with this kind of humour (in the vein of the shit-and-piss tomfoolery of, for example, the artist, theatre director and television producer Wim T. Schippers). McCarthy’s Red Santa employs platitude of a similar kind, but the quality of the work lurks in the subtle subversiveness that can also be found in the work of Schippers. Dutch public space seems ripe for Paul McCarthy.