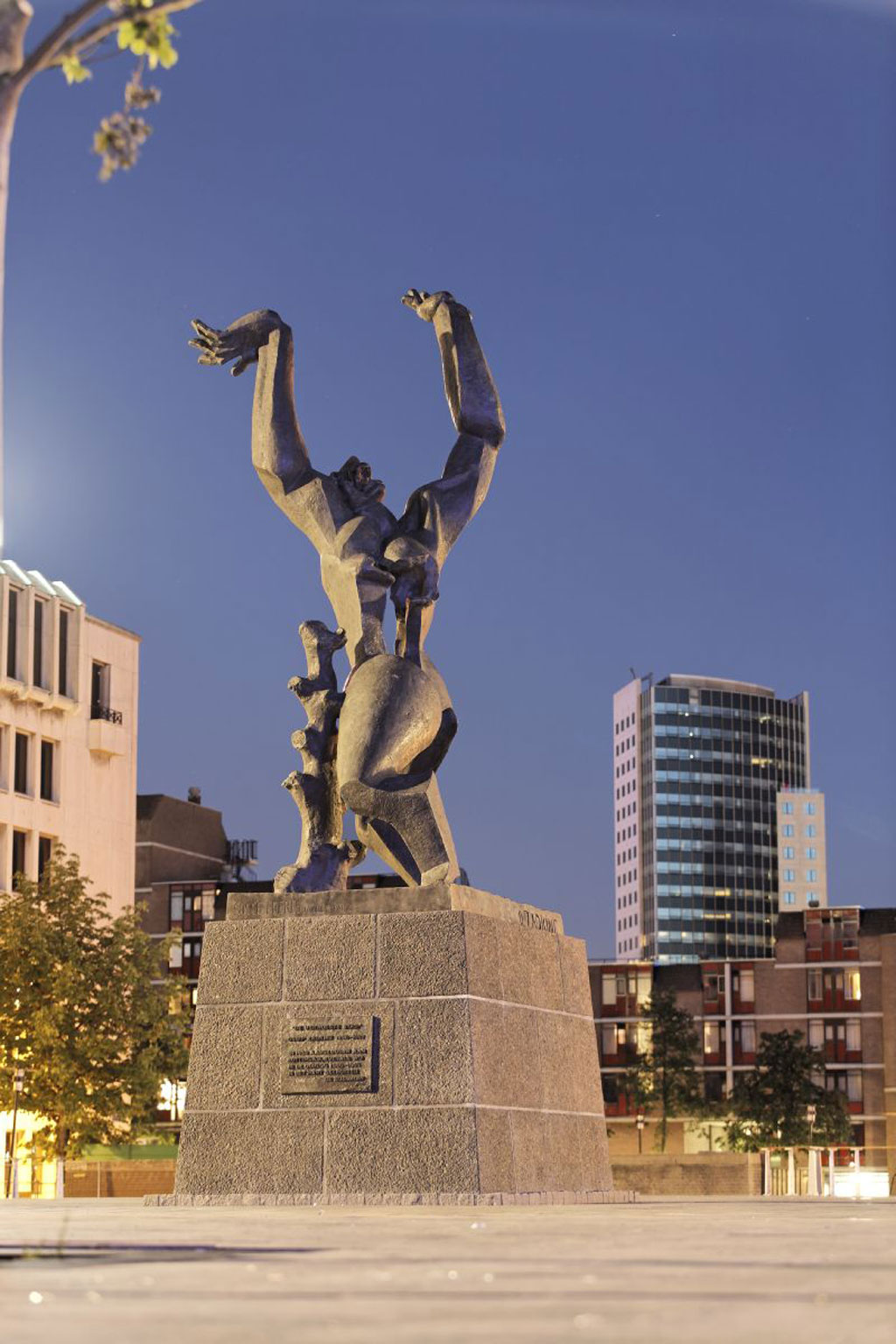 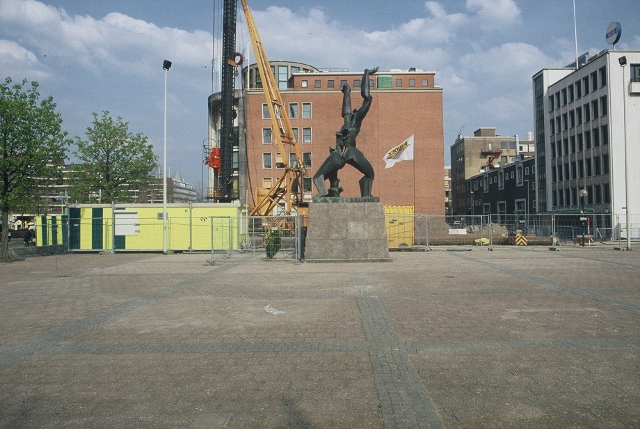 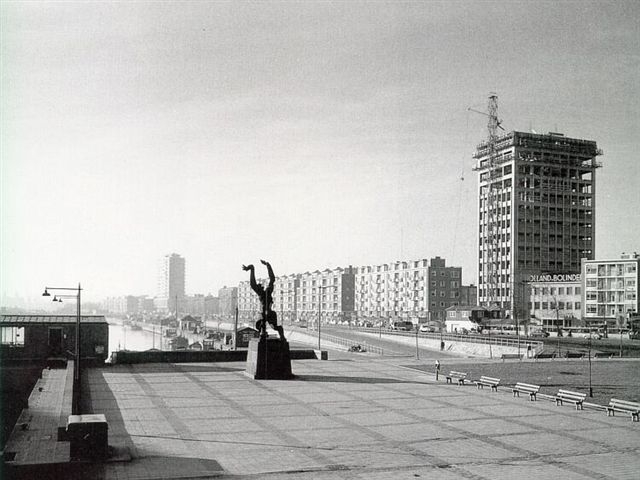 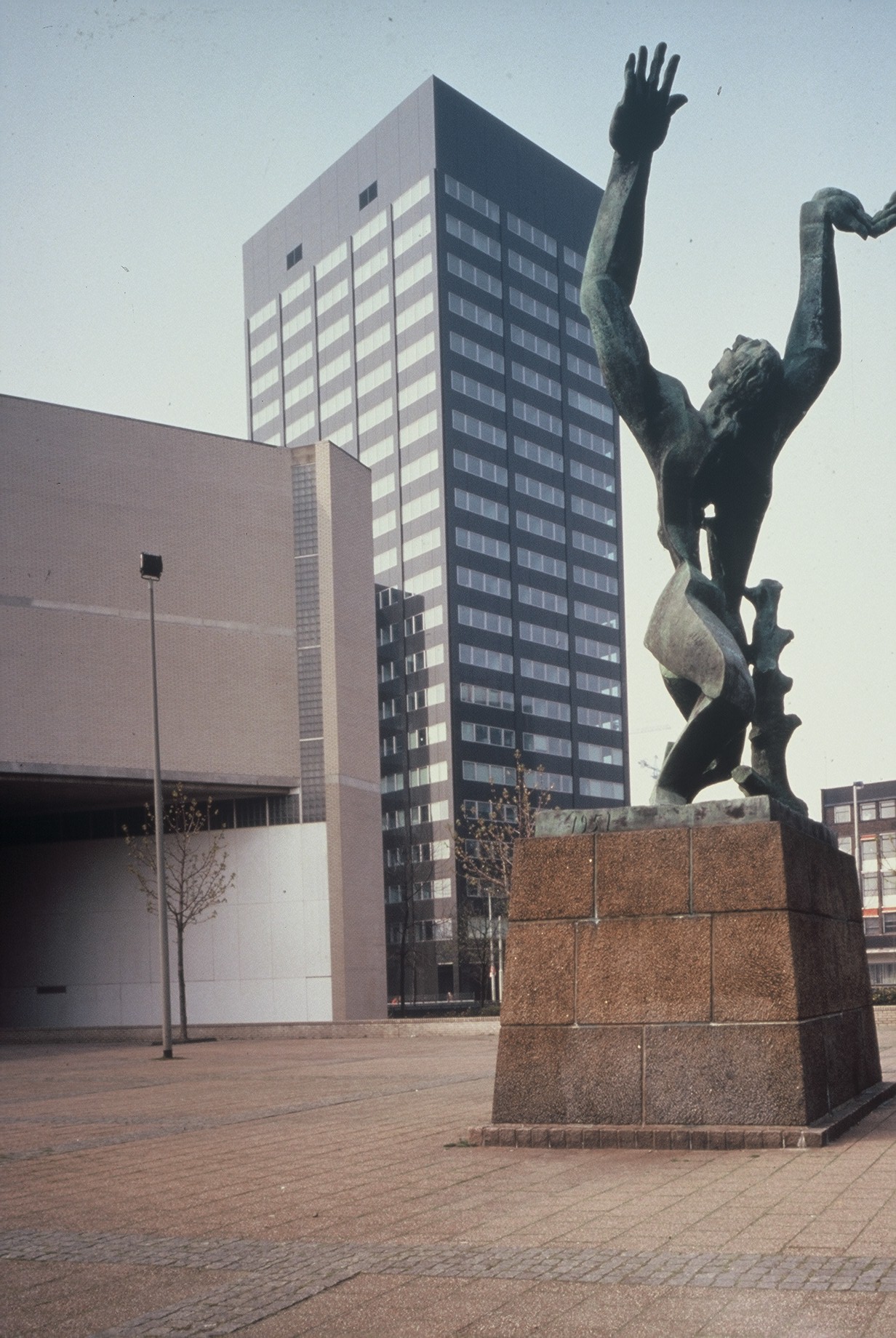 According to Zadkine the idea for The Destroyed City was born when he arrived by train in the devastated city of Rotterdam in 1946. It is, in his own words: ‘A cry of horror against the inhuman brutality of this act of tyranny.’
[From: M.G. Schenk, Ossip Zadkine, Amsterdam 1967].

The sculpture represents a distressed figure with its head and arms lifted skywards. Zadkine has positioned the arms, legs and hands in various directions, giving the sculpture a great dynamism. The figure leans against a tree trunk, providing a balance for the six-metre high colossus.

The hole in the figure’s torso symbolises the destroyed heart of the city during the bombings of 14 May 1940. 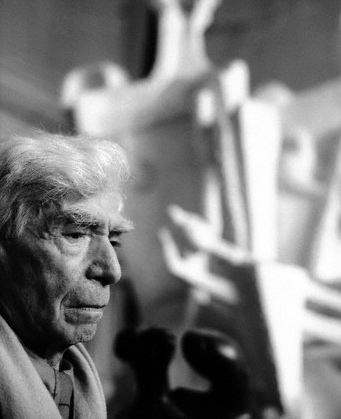 Ossip Zadkine was born in Vitebsk in Belarus, then part of the Russian Empire, in 1888. At the age of fifteen he was sent by his father to Sunderland in the north of England to learn English and ‘good manners’;. He moved to London and attended some art lessons at the Regent Street Polytechnic, but considered the teachers too conservative. In 1909 he settled in Paris where he encountered many artists involved in the newest art movements such as Cubism. He exhibited his work for the first time in 1911.

After the Second World War he worked in a geometric style influenced by Cubism using modelling clay, stone and wood. After 1930 his work became increasingly freer and more baroque. At the outbreak of the Second Wold War he fled to the United States, where he made his first pierced figures. Upon his return to Paris in September 1944 he found that many of his works had been stolen from his studio or destroyed.

Zadkine’s themes were taken from the Bible, classical mythology, music and poetry. Over the years his work developed an expressive lyricism and an ever-greater plasticity. In 1950 Zadkine won the Grand Prix for Sculpture at the Venice Biennale. In this period he had exhibitions at the Stedelijk Museum in Amsterdam and Museum Boijmans Van Beuningen in Rotterdam. He died in Paris in 1967 and is buried in Montparnasse cemetery.

The Destroyed City is without doubt Rotterdam’s best-known sculpture. It also occupies a special place in the oeuvre of its maker Ossip Zadkine. Not only is it his largest sculpture but it is one of the most compelling articulations of what concerned him as an artist. Together with Henri Laurens, Alexander Archipenko and Jacques Lipchitz, Zadkine belonged to the generation of sculptors who were significantly impressed by their first contact with cubism in Paris around 1910. Cubism showed him a way to treat his primary theme, the human figure, as an interplay of lines and open and closed forms. Zadkine was equally concerned with emotion. His sculptures are marked by great expressiveness. Zadkine was regarded as one of the leading artists of his day, particularly in the Netherlands, although his art was clearly rooted in tradition. Following in the footsteps of Rodin, an artist for whom he held great admiration, Zadkine used the human figure to voice the condition humaine. Nowhere does that sweeping theme take such a compelling shape as in The Destroyed City. This sculpture has come to epitomize the bombardment of Rotterdam.

Zadkine nonetheless started out with a more universal memorial in mind. A terracotta design for the sculpture was first exhibited in Prague and Berlin in the summer of 1947. This 70 centimetres tall model was later irreparably damaged in transport, so Zadkine made a new version, this time from plaster. Nearly twice the size of its predecessor, the object formed part of a one-man exhibition shown in the summer of 1948 in Brussels and Amsterdam. To judge from Zadkine’s memoires, his design first attracted attention when it appeared at the Stedelijk Museum, Amsterdam: ‘I noted how the polite appreciation – indifference, almost – which had greeted my project until then now made way for an emotional reaction due to what people had just been through.’ G. van der Wal, the managing director of the Bijenkorf chain of department stores (and also a modern art lover), was so impressed that he conceived a plan to donate a monumental version of the sculpture to the city of Rotterdam. By May 1949, this plan had become sufficiently concrete for Zadkine to title the piece Design for the Destroyed City of Rotterdam in his retrospective at the Musée National d’Art Moderne, Paris. Van der Wal, to avoid any suspicion of self-interest, chose to remain anonymous as a donor (until 1978). His prior conditions for the gift were that the City Council must give it their unanimous assent, and that Zadkine must himself be allowed to determine where the monument would be placed.

In order to gauge public reaction, the design was presented to the citizens of Rotterdam no less than twice. The first time was in the Museum Boymans, where a retrospective exhibition of Zadkine’s work opened on 1 December 1949. The design, now cast in bronze, was displayed prominently in the museum’s round upper hall. The circumspection with which the matter was handled is illustrated by the fact that the name of Rotterdam had now disappeared from the title.

The press in general reacted warmly to the idea of erecting a monumental Zadkine sculpture in a public space; it was a plan that meant ‘no less than that our country is to gain a monument by one of the greatest sculptors of our time’, according to the newspaper Trouw of 3 December 1949. One exception was a fierce article by the director of Rotterdam’s public works department, J. Tillema, in Katholiek Bouwblad. ‘Must this frenzied effigy, six metres tall, become a demonic scourge that will forever sap the new heart of my city?’, Tillema wondered rhetorically. He met little support for his views. On the contrary, many people thought it a merit of the design that it ‘represents the city’s despair and its longing to rise up again in a way clear to everyone’. Zadkine played his own part in encouraging that reading. In conversations with journalists around the time of the opening of his exhibition in the Museum Boymans, he had directly characterized Rotterdam after the bombing as ‘a city whose heart has been ripped out’. The identification of the sculpture with the city soon became practically a fait accompli. Not only was the torn-out heart of the tragic figure interpreted as a symbol of the destroyed city centre, but people drew a connection between its coarse, scrawny aspect and the Rotterdam character. The far-reaching annexation of Zadkine’s design reached its peak in a spectacular presentation at the Rotterdam Ahoy’ exhibition in the summer of 1950; dramatically lit, the sculpture stood against the backdrop of a large photograph of the inner city in ruins.

Although after 1949 Zadkine repeatedly asserted that the bombed city of Rotterdam was the inspiration for his sculpture, it is not clear what part the city really played. It is more probable that Le Havre, the heavely devastaded city where he had arrived in 1945 after four years of exile in America, gave him the first impulse for the design. Zadkine was undoubtely keen to see his design executed on a monumental scale. Besides perhaps a touch of opportunism, it must have been his wish to narrow the gap between modern art and the public that tempted him to link the sculpture so literally with Rotterdam. His explanation certainly helped bring about official acceptance of the gift, in the summer of 1951, followed by the unveiling of the six-metre tall sculpture on 13 May 1953. All the same, the explicit connection with the bombing of the centre of Rotterdam has had a narrowing effect on interpretations of the sculpture. The hole in the torso is much more than a symbol of the destroyed city centre. At a formal level, it acts as a pivot for an almost baroque tension and dynamism. The Destroyed City combines treatment of the legs as abstract volumes with an oversized realism of the thrust-back head and elevated arms. The torso plays an important part in uniting these disparate formal idioms.

The intention of conveying emotion was also evident in Zadkine’s choice of a location for the sculpture. In October 1950, Zadkine expressed his preference for the dockland promontory of Leuvehaven; the other two alternatives proposed to him were the park behind the Museum Boymans and the public square Kruisplein. Leuvehaven, right in the centre and as yet unmarred by advancing high-rise development, offered all the space needed for the sculpture to do justice to its emotive potential. Poised on a two-metre tall pedestal (designed by Tillema, once so fierce an opponent), the six-metre figure stood out unobstructed against the sky, its dramatically raised arms echoed by the harbour cranes. The motif of the uplifted arms is not the only aspect which has repeatedly prompted comparisons of Zadkine’s The Destroyed City with Picasso’s Guernica of 1937. Both artists succeeded in giving shape to the horror of war in a way that was widely convincing, using the idiom of modern art.
Hanneke de Man