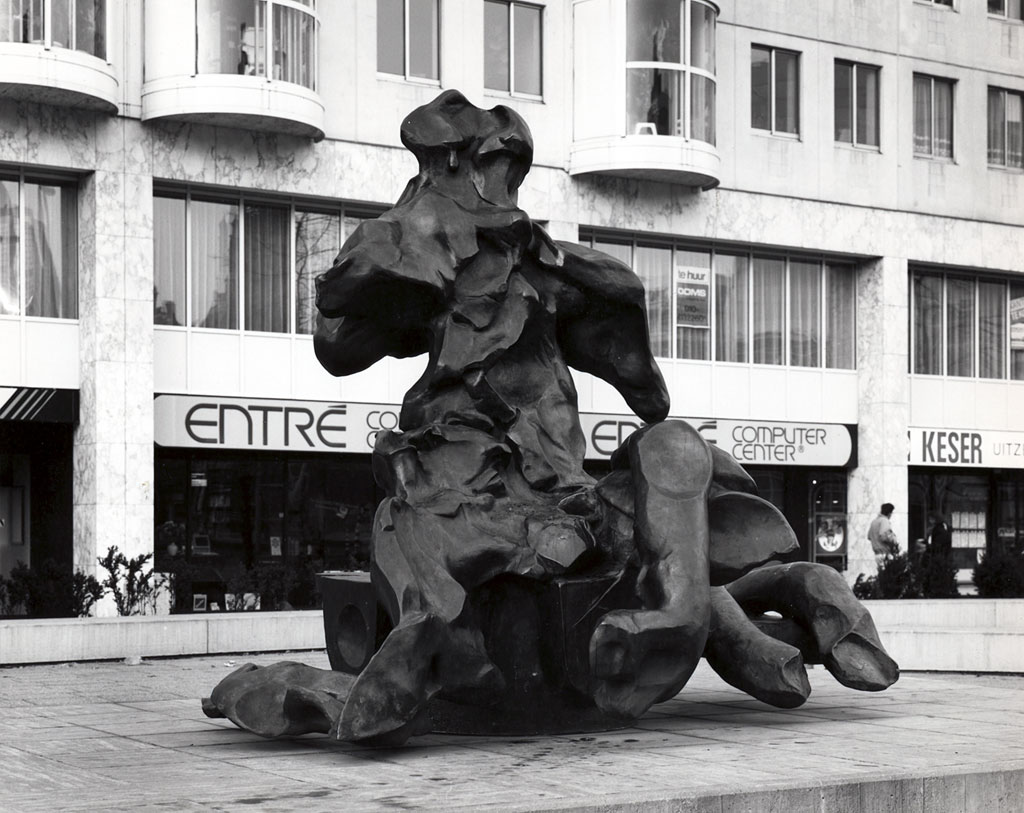 Seated Woman (1969) is one of the three sculptures by Willem De Kooning in Rotterdam. They stand together near the Hofplein in the centre of the city. The other scuptures are Reclining Figure (1969) and Standing Figure (1969). Seated Woman is owned by the city, the other two sculptures are in ownership of the Willem De Kooning Foundation and had previously stood in Boston.

At the end of the sixties, the painter Willem de Kooning began experimenting with modelling clay. De Kooning saw his working with clay as painting in three dimensions. He made the sculptures, just like his paintings, with a spontaneous gesture without sketches or preparatory studies. Advised by Heny Moore, he had Seated Woman enlarged and cast in bronze. He was enthousiastic and started working on a large scale with three pairs of gloves on top of one another because he found his own hands too small. He did not consider modelling to be any different from painting; he regarded clay as thick paint.

The monumental bronze sculpture Seated Woman by Willem de Kooning is on a stone podium next to the large fountain on Hofplein. It is a rigorously stylized depiction of a woman, with a broad-shouldered torso inclining backwards and firm, foreshortened arms. The lower body is turned slightly to the right, while the legs are crossed over each other. Notwithstanding the figure’s seated pose the sculpture creates a dynamic impression; the entire composition appears to be charged with energy. From close to, the brown-tinted bronze – in which here and there a golden or russet colour seems to filter through – bears the scratches scored into the clay by the artist before the sculpture was cast. These lines give a sense of direction to the volumes and underpin the dynamic effect. But it is above all the continually changing interplay of light and shadow overall that makes Seated Woman such an animated sculpture. While sunlight is reflected on its shiny, convex forms, strongly contrasting, almost black areas of shadow fall into the sculpture’s hollows. The model for the sculpture is from 1969, but Rotterdam’s Seated Woman, the third cast from the model, was produced in 1980. In 1984 at the instigation of Wim Beeren, director of Rotterdam’s Museum Boijmans-van Beuningen, the sculpture was purchased and unveiled in April of that same year. It was a mark of honour to the American artist who was born in Rotterdam.

De Kooning was born in Rotterdam’s Oude Noorden district on 24 April 1904, the son of a wine merchant and barmaid. At the age of 12 De Kooning joined the firm of Gidding in Rotterdam where he trained to be a painter and decorator. During the evenings he took classes at the Academy of Visual Arts and Technical Sciences, known nowadays as the Willem de Kooning Academy. In 1925 he sat his examinations and in the spring of 1926 emigrated to America where he settled permanently. The first year he supported himself by taking any job he could find, meanwhile painting in his spare time. In 1935 he became involved with the Federal Arts Project, a government funded initiative to support artists during America’s economic crisis. Along with such painters as Arshile Gorky, Jackson Pollock and Franz Kline, De Kooning would become known as one of the exponents of Abstract Expressionism, the avant-garde movement in which New York acquired a pre-eminent role in modern art around 1950. In 1953, just when his abstract works were becoming successful, the artist exhibited a series of large pictures of monumental, expressively painted women that almost appear to advance towards the observer in a threatening manner. De Kooning refused to distinguish between abstract and figurative art and along with landscapes, women formed a central theme in his work. Just as with his paintings, in his sculptures the female form was in no way idealized. An expressive frenzied energy was paramount and sometimes, as in Seated Woman, the body was given an extra pair of limbs.

De Kooning was already 65 years old when he began producing sculpture. During a stay in Italy, in the summer of 1969, he met the sculptor Herzl Emanuel who had just become the owner of a small bronze foundry, just outside Rome. Here the artist modelled several small pieces in clay, roughly the size of his own hand. Thirteen of these were cast in bronze. One year later, at the behest of the well-known sculptor Henry Moore, it was decided to enlarge one sculpture from the series to a monumental format. The choice fell on Seated Woman, which resulted in the present three-metre high sculpture. De Kooning was so enthusiastic with the result that he instantly wanted to work on a similar scale. Since he thought his hands were too small for modelling and kneading the clay for these large-scale sculptures, he wore three pairs of work gloves, one over the other. Until 1975 De Kooning’s work with modelling appears to have been as important to him as his painting. Over five years he made around 25 sculptures cast in bronze, some of which were donated to the Stedelijk Museum, Amsterdam. He regarded his sculptures as ‘painting in three dimensions’ and once described clay as ‘thick paint’. Thus De Kooning’s sculptures are a direct extension of his paintings: he worked with clay in the same way as he sketched and painted. And similar to his paintings, his sculptures were also achieved with virtually no preparatory studies. Each of his capriciously painted forms was done in one frantic outburst. Thereby the expressive, seemingly unfinished aspect of Seated Woman is typical of De Kooning’s entire oeuvre.