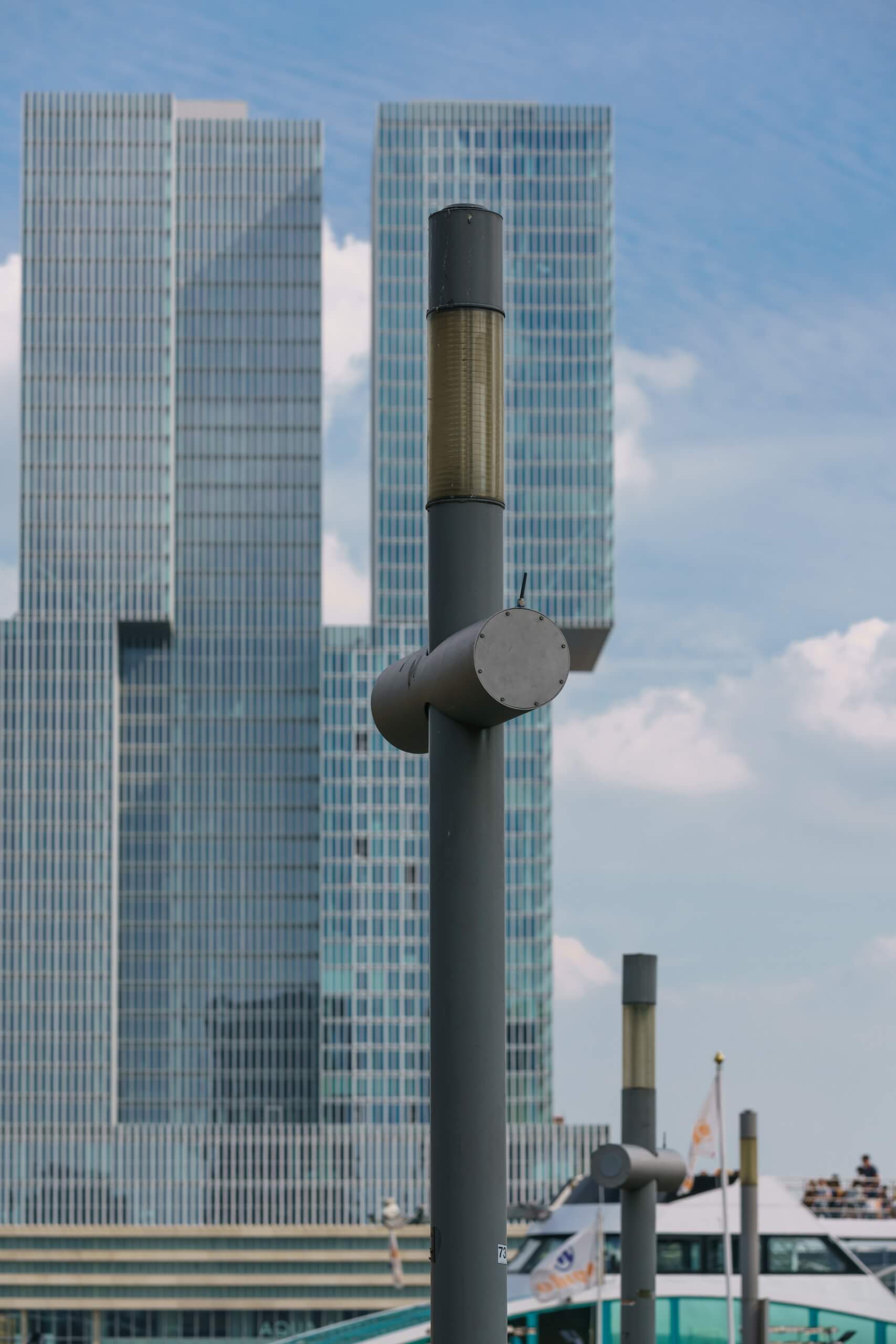 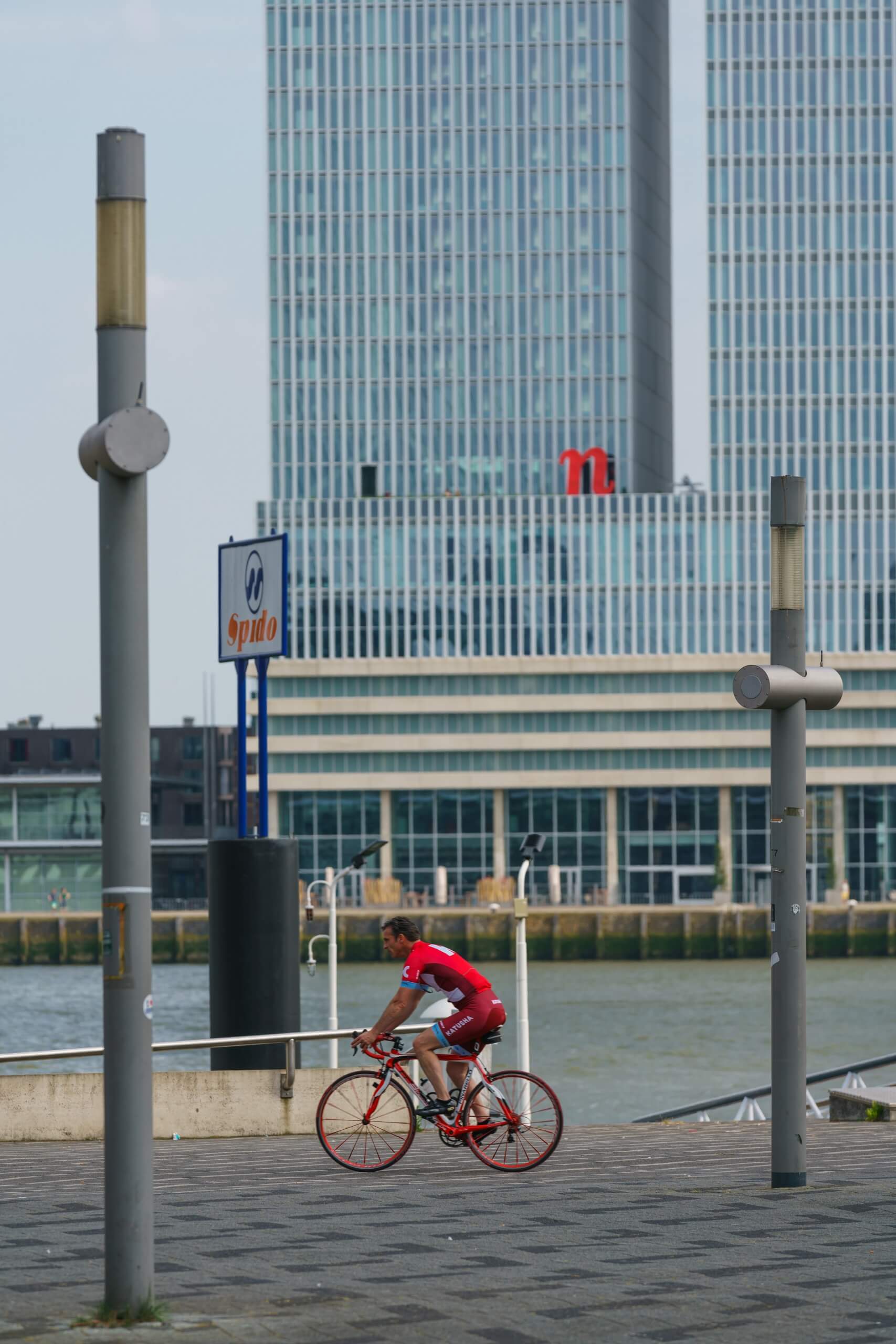 The work Seven Tears by Scottish artist Susan Philipsz can be heard through seven speakers that are spread around the Willemsplein; the artist based the sound piece on the composition Pavane Lacrimae by Dutch composer Jan Pieterszoon Sweelinck (1562 – 1621). The piece (37″) plays daily, starting at 12:00, 15:00, 18:00 and 20:00 hrs.

Sweelinck based his Pavane Lacrimae on the song Flow My Tears by his cohort, composer John Dowland (1563 – 1626). This song by Dowland, made for lute and voice, was quite influential at the time. It is one of the first examples of the ‘trend’ of the time of melancholia, the emotional mood often written about at that time.

Seven Tears
Philipsz experimented for the plaza under the Erasmus Bridge – bordered by apartment complexes, the Erasmus Bridge and the Maas- with different kinds of sound. A first-string version was followed by a wind version with organ pipes, followed by the final version. In this version, Sweelinck’s composition is played by musicians on glasses filled with water. The composition refers to the drops of tears as a motif, and the element of Baroque lament, which appeals to the idea of happiness as a fleeting emotion. Due to its ingenious, precise set-up, with speakers specially designed for the purpose mounted on light poles, the sounds and fragments of music mix with the sounds of the city. The sound landscape accompanies the passers-by walking under the bridge along the Maas with striking subtlety, playing each evening during sunset. 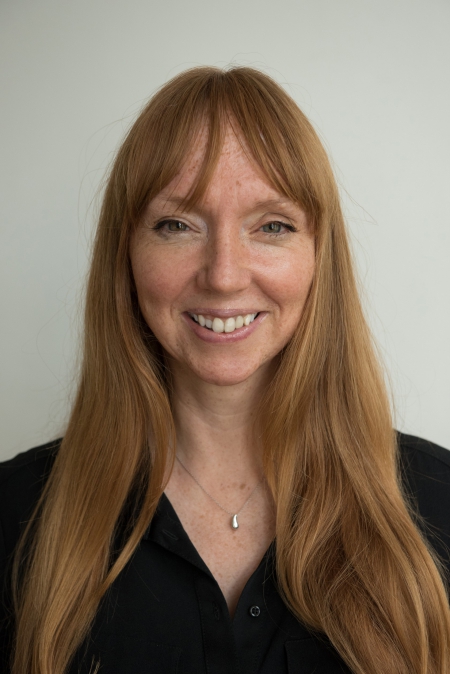 Scottish artist Susan Philipsz (1965, Glasgow) has been using sound for more than 20 years in her work for the public space and art centres. In her work, for which she won the Turner Prize in 2010, she re-arranges and re-interprets existing compositions or pieces of music on the basis of context-specific conditions. Like a sculptor, she explores the spatial qualities of sound and its emotional and cognitive dimensions. Her recent work often revolves around existentialist themes like trauma and sorrow.

Susan Philipsz has exhibited in numerous museums and art centres in Europe and North America. She has realized various projects in the public space, including on Governor’s Island (New York). Philipsz’ work is part of a number of large art collections, including that of the Solomon R. Guggenheim Museum in New York, The Tate in London and Museum Ludwig in Cologne. Her work is represented by gallery Ellen de Bruijne (Amsterdam) and Tanya Bonakdar Gallery (New York).