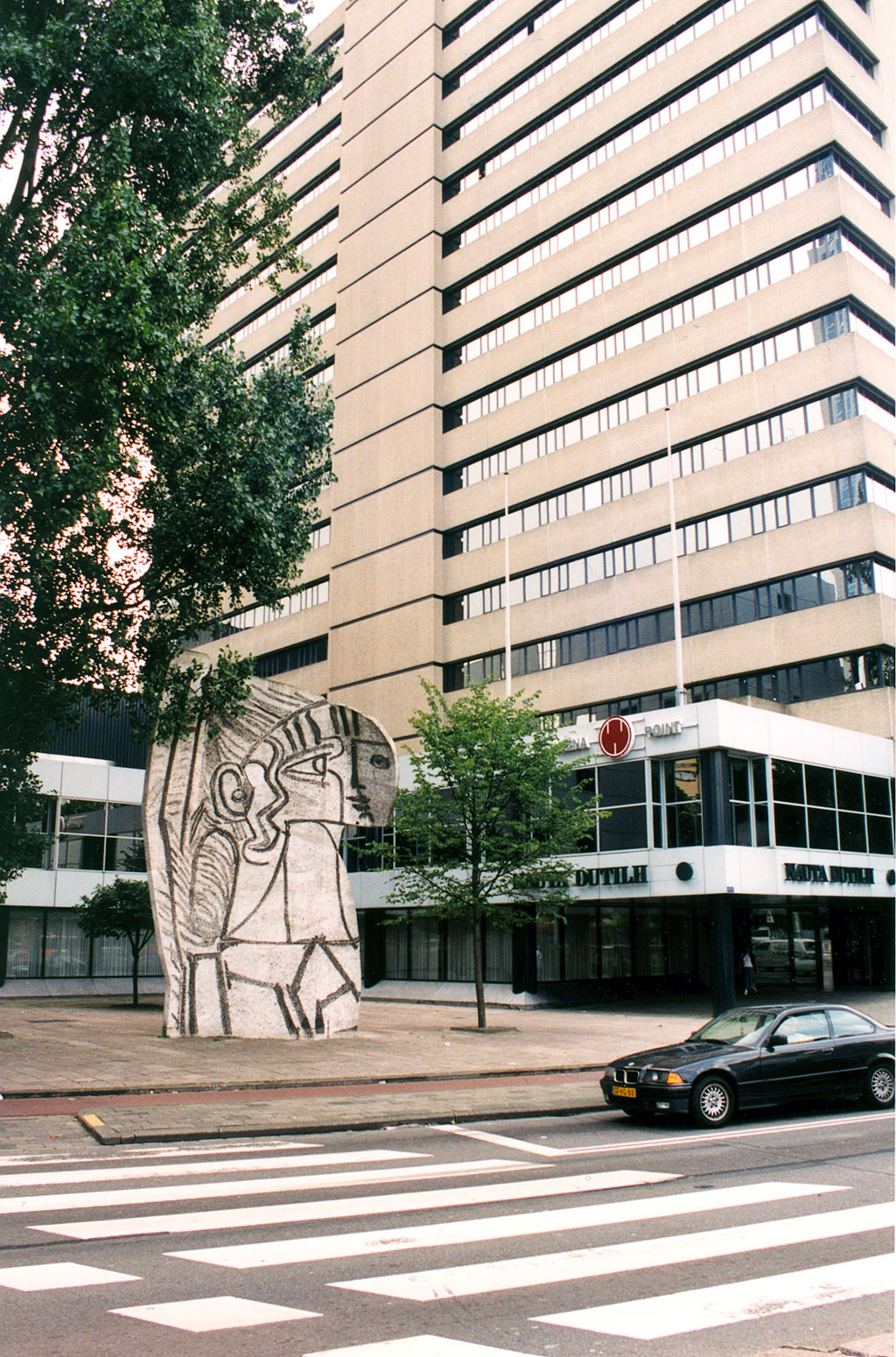 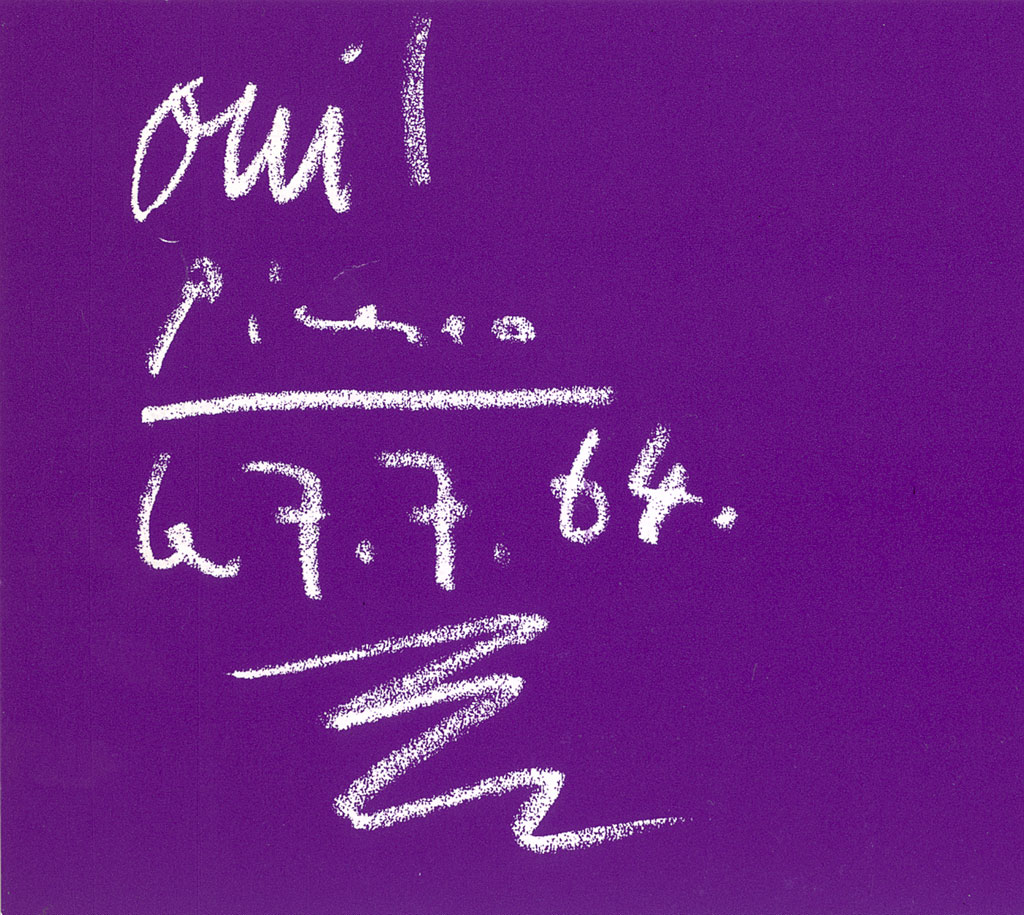 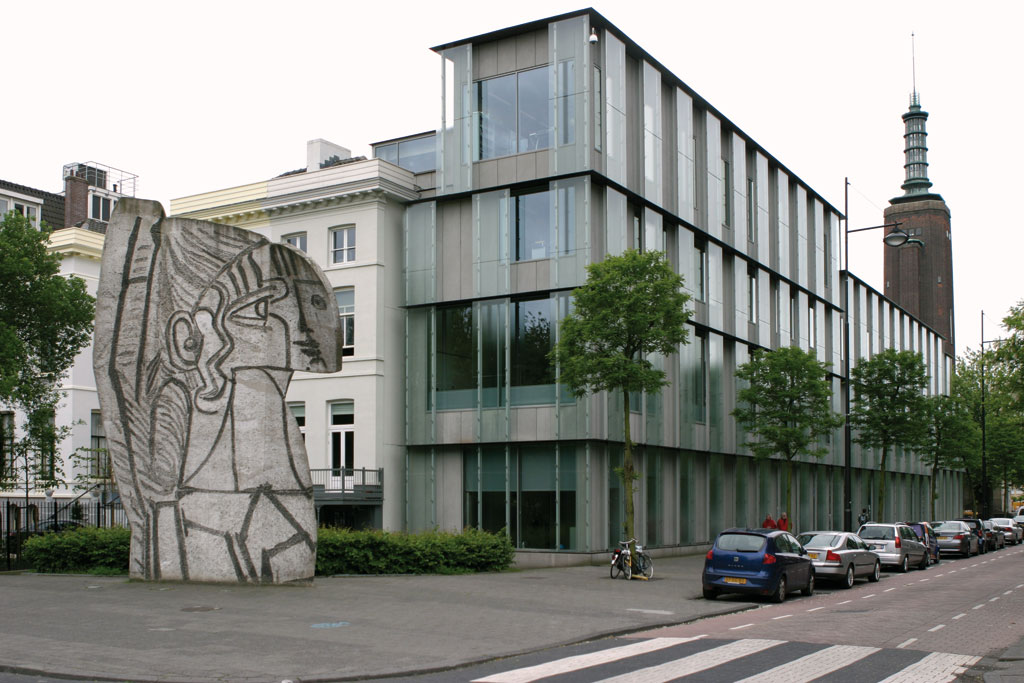 The large sculpture by Picasso, which the city of Rotterdam acquired following a seven-year process, depicts the nineteen-year-old girl Sylvette David. In a short period of time in 1954 Picasso made a large series of portraits of this young woman with her youthful classic profile and her hair in a ponytail including several sculptures. In this series Picasso attempted to capture his model’s unique characteristics in a broad range of styles that he had used throughout his career including the multiple viewpoints typical of his Cubist works. In this way he dissected his subject into small components and recomposed them from various viewpoints, combining profile with frontal view, eschewing all rules of perspective.

The concrete sculpture Sylvette is an enlargement of one of the small sculptures Picasso made in painted sheet metal. The technique used to create the large sculpture was developed with Picasso’s friend, the sculptor Carl Nesjar. The sculpture was cast in concrete with black pebbles. Nesjar copied the lines that Picasso had painted on the original metal sculpture by sandblasting the concrete to reveal the black pebbles. This technique, known as ‘concrete sgraffito’, produced lines that evoked the hand-painted character of the original model.

This technique led to the criticism (unjustly directed at Nesjar) that the sculpture too greatly resembles a folded line drawing rather than an autonomous sculpture that defines the space around it. 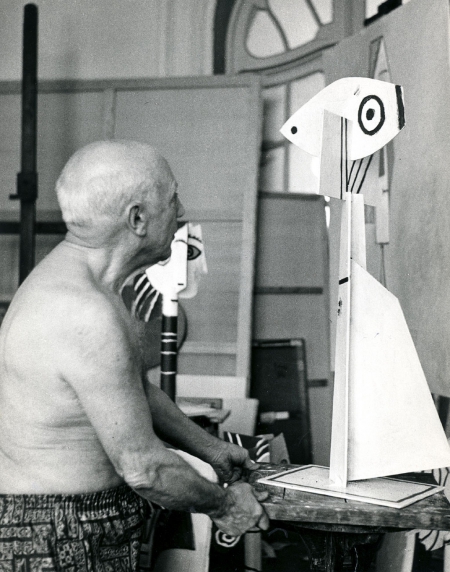 Pablo Picasso met the 20-year-old Sylvette David in the spring of 1954. He was then 73 years old and throughout his various artistic phases the female portrait had always held a special place of honour. In fact Sylvette was the embodiment of a type of woman that the artist had already drawn from his imagination during the past year; a young girl, head raised proudly on a slender neck, with classic features and blond hair tied in a high ponytail. It is small wonder therefore that Picasso asked her to pose for him. Sylvette agreed, and Picasso made some 40 drawings, paintings and small metal sculptures of her over a period of two months. These series of portraits have been described as an artistic declaration of love. Picasso interpreted her face in every conceivable style, from naturalistic drawings to paintings in which he examined Cubism afresh; a style which he and Georges Braque had created almost fifty years earlier.

The works reveal his mastery as a painter and are evidence that even at an advanced age he was still capable of reinventing himself. Moreover, the series illustrate how Picasso was able to approach one motif in various naturalistic and Cubist styles. While Cubism was much appreciated in the art world of the 1950s, it was not a popular trend among the general public. The Sylvette series, however, made modern art more accessible and Picasso’s work more understandable. Even the younger generation could identify with the series, to the extent that Sylvette’s self-assured upright bearing and ponytail were widely imitated in Paris at the time. For a while girls with hair and posture `a la Picasso’ dominated the streets of the city.

In 1957 Picasso became acquainted with the Norwegian artist Carl Nesjar. Nesjar had invented a process for a new type of concrete developed in his country that enabled him to make large sculptural constructions. The so-called Betrogravures were produced by mixing small black stones into the concrete. When the concrete hardened he worked on it using a sandblaster to expose the dark stones. In this way Nesjar could draw rough linos into the concrete. Picasso was impressed by this process and the opportunities it afforded to enlarge his small sculptures. In that same year an initial collaboration ensued in which Nesjar translated three of Picasso’s images into three monumental murals for a government building in Oslo. Many more of such works followed for public buildings and parks all over the world. Even the Parisian art dealer Daniel-Henry Kahnweiler, Picasso’s agent and friend, had a concrete construction in the garden of his holiday home. The managing director of the Bijenkorf department store, van der Wal, a member of the Urban Embellishment Committee, saw this sculpture in 1963 and was so excited by it that he proposed buying a similar concrete sculpture for Rotterdam. Thereupon, the committee proposed placing a 12 metre high sculpture by Picasso in Kralingse Hout, a greenbelt area northeast of Rotterdam. However, shortly after Picasso agreed to the plan it was withdrawn under the pressure of public opinion. Unlike the local councillor for culture, the Rotterdammers did not want a `concrete monstrosity’ in a green space. In fact even the councillor changed her mind after seeing Bird, a similar sculpture, in 1965 in Amsterdam’s Vondel Park. This had not made an altogether favourable impression on her. Notwithstanding, in 1966 the committee again tried to acquire a Picasso sculpture. In 1967 Picasso proposed making a Betrogravure of Sylvette as an expansion of the small tin sculptures. This plan was cancelled bythe council itself forfear of a new clash with the local population. Nevertheless three years later a Sylvette was placed in Bouwcentrum (Building Centre), on the corner of Weena and Westersingel. The 7.5 metre high and 4.5 metre wide panels of Sylvette are sandblasted on both sides and evoke the spatiality Picasso conveyed in his Cubist works once more.

Rotterdam can thank its Sylvetteto C(ommunicatie)’70, one of four large manifestations to celebrate the city’s post-war reconstruction. Picasso’s sculpture was intended to exemplify the modern and progressive nature of the city as well as its international appeal. The Bouwcentrum purchased the work in 1971 and then donated it to the City Council. However, the Rotterdam Sylvette remained a gift that evoked a great deal of protest over a long period of time. Only now it was not the local population that was up in arms but young Rotterdam artists. They mainly objected to the fact that Rotterdam Council had — in their opinion —not acquired a genuine Picasso work executed by Nesjar, but rather a Picasso-oriented work by Carl Nesjar. It is noteworthy that similar remarks were not heard from other countries which owned one of Picasso’s Betrogravures. In New York, where a Sylvette has adorned the plaza of New York University and where the authorship is not an issue, there is extreme pride in the sculpture.

Over the last decades the situation around the Sylvette has rad¬ically changed. The artistic dispute about the sculpture has long subsided, but now the sculpture is increasingly hidden from view. The entrance to the Bouwcentrum has moved, the wall behind the sculpture is no longer red brick but a light plastic sheeting, and the trees flanking the art work have grown dramatically. The appeal the sculpture once had is waning. Perhaps the Rotterdam Sylvette is due for a new lease of life elsewhere in the city.