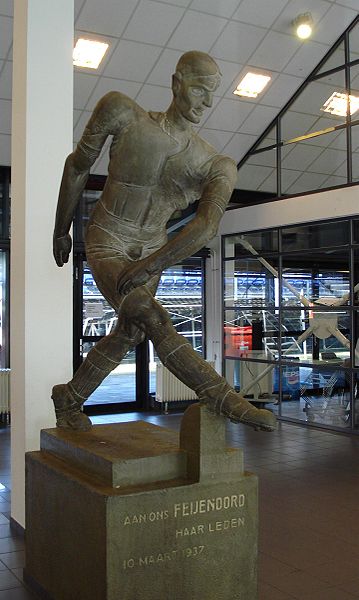 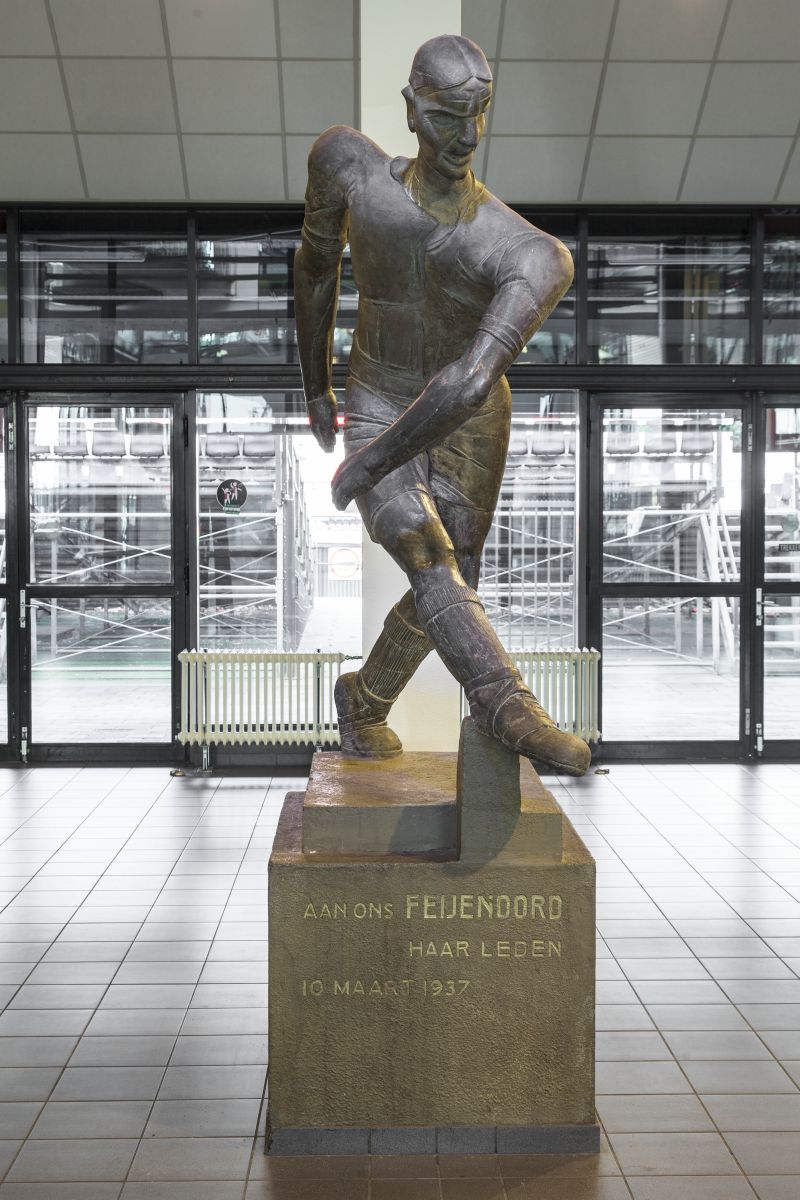 The Footballer by Chabot is made from reinforced concrete. The sculpture has been on display in the foyer of Feijenoord Stadium since its opening in 1937. The cast concrete sculpture is an exception in Chabot’s oeuvre; the artist usually carved directly in stone or wood. Reinforced concrete is an unusual material for making sculptures. The concrete sculpture is supported by a rigid skeleton of iron bars. However, this is not the reason for the footballer’s rather stiff pose.

Chabot consciously chose for these angular forms. He believed that football was a working-class game and so his footballer should have the posture of a worker: with exaggeratedly broad shoulders and strong forearms.

The footballer seems frozen in his pose. The only form of dynamism is supplied by the limbs that stick out in various directions. The body is highly stylized. There is little variation in the modelling of the forms and the few details are indicated with lines. Only the head is modelled more realistically. 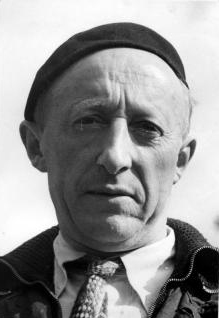 Hendrik Chabot was born in Sprang, near Rotterdam, in 1894. In 1906 his family moved to Rotterdam, where he was apprenticed to a painting firm. From 1908 to 1919 he attended evening classes at the Academie voor Beeldende Kunsten in Rotterdam, where he was taught by Antoon Derkzen van Angeren and Anthonie van Maasdijk. Chabot&#8217;s work was initially academic, but he gradually developed a personal idiom, mainly painting farmers and workers. From 1915 he also worked as a painting restorer.

During the Second World War, Chabot’s studio was hit by a German bomb and many of his works were destroyed. The misery he suffered in the war was expressed in his sombre choice of subjects and his palette. After the war he again began to use brighter colours.

Chabot died in 1949. There were several memorial exhibitions of his work, which was highly prized. In 1955 Museum Boijmans Van Beuningen bought a collection of works by Chabot. However, in the mid-1960s interest in his work dwindled. There was a renewal of interest in the 1980s, which led to the first balanced view of his entire oeuvre.

Henk Chabot, mainly known as a painter, but who was also very active as a sculptor in the 1920s and 1930s, profited during the Depression from Rotterdam’s increasing interest in embellishing the city with sculptures. In 1931, in a rare interview, he still had reason to complain about the lack of such a possibility. “It is precisely in Rotterdam with its large working-class population that it would be applauded if sculpture was given the opportunity to prove itself in the new neighbourhoods. Nothing is done from the top, and just as little is done from the bottom. We have tried various housing associations, but they don’t warm to the idea. Honestly, we want to work [for these neighbourhoods] and of course make a living, but it is practically hopeless.” It would seem that the Rotterdam council took his complaint to heart, for in that same year he was commissioned, along with other modern-inclined sculptors, to make keystones for bridges in Blijdorp, a new city neighbourhood. Five years later he made a modest contribution to the G.J. de Jongh Monument in the city’s Museum park. More important, however, was a commission to design a sculpture for R.V. & A.V. Feijenoord, the newly completed stadium of the Rotterdam football association.

The work had to depict a soccer player and, like the building itself, had to be in concrete. Chabot was given the final go ahead after showing a small model of his design in clay to the stadium board. In retrospect this seems quite remarkable, since the criticism the sculpture received at the opening of the stadium on 27 March 1937 was by no means mild. According to the daily De Telegraaf, ‘a sculpture of a handsome and healthy man’ would have been more appropriate instead of this ‘sick person’. A Rotterdam newspaper published an epigram that ended with the lines: “There it will stand, until human mortals / even in art, court the truth once again / And beat this hard piece of mockery a lot / One day that may be its fate! / til then, Chabot”. Criticism was chiefly aimed at the primitive appearance of the ‘awkward and degenerate’ sports figure. Notwithstanding its two-metre height, it has a stocky build, chiefly because of the disproportionately broad shoulders and thick underarms. Anatomical details like the leg muscles, knees and face are unrealistic and rudimental. Where other sculptors would probably have taken a leg hurling forwards as a starting point for a dynamic twisting torso, as in a corkscrew-like movement, Chabot did exactly the opposite: the figure is twisting the other way. In fact he has depicted two moments from a typical movement when taking a shot. The strangely contorted upper body is poised for a vigorous effort, while the straight right leg indicates the shot has already been taken. However, Chabot’s main aim was to show a complex formal interplay of opposing diagonals, which, in fact, characterizes this statue. But due to the long, narrow head, obvious scowl, too large ears and an eye-less face rigidly focused on an absent ball, his contemporaries mainly saw the sculpture as a complete caricature of a soccer player.

As well as the general public, which quickly christened it ‘Jack the Gorilla’ and ‘Hans-with-the-Hands’, the heroes of the ball themselves suspected that The Soccer Player illustrated a less favourable opinion about their intellectual level. They were used to sports figures being immortalized in a classical heroic manner as in antiquity or Nazi Germany, where the cult of sport had just reached its zenith with the 1936 Olympic Games. Chabot was not the only Dutch artist who around 1930 had evolved a distorted, naïve style for paintings and sculptures of peasants and workers. This was seen as appropriate for the rough yet unaffected and honest ‘common people’. The artists Leo Gestel, Constant Permeke and Charley Toorop, Chabot’s friend, also approached this kind of subject matter using the same distorted idiom. At the time, football was the quintessential working-class sport and Chabot, in response to criticism of his sculpture, is reported to have sarcastically remarked that you did not need much of a brain to run after a ball. In fact it was the working-class nature of a footballer that prompted Chabot to elevate it to an artistic theme. As Charley Toorop once said about the peasants and workers in her paintings: ‘Whatever they lack culturally, they at least remain free of ‘civilization’ which makes for impotency.’ In order to give concrete form to such viewpoints, Chabot – in imitation of the Cubists and Expressionists of the first decades of the twentieth century – harked back to non-classical, ‘uncultured’ predecessors from art history, including archaic and Romanesque sculptors, Pieter Bruegel, whom he very much admired, and certain non-western art. The material he used also played a role in achieving the distorted aspect of his work. Chabot’s wood figures, for instance, deliberately encased within the form of the tree trunk from which they were carved, resemble totem poles. Noteworthy, too, is his Head of a Zeeland Peasant (1933), chiselled from the round form of a millstone. In The Soccer Player the bent reinforcement rods in the concrete can still be seen, as if Chabot is trying to demonstrate that rough materials result in a rough formal language. When The Soccer Player is looked at from the front and to the left you see different aspects – legs and head are in profile while the trunk is frontal. This depiction of the figure is typical of those seen in reliefs from ancient Egypt, as are the archaic grin, almond-shaped eye sockets and the engraved, barely representational detailing. In this sense the sculpture is similar to Chabot’s more refined sculptures from the 1920s with their sometimes Egyptian-looking, art-deco stylization. However, The Soccer Player is substantially more free and expressive even though the complex stylized aspect has been retained in the main shape. Meanwhile, the earlier criticism of the work has died down but it cannot be denied that the author of the above-mentioned epigram had a certain prophetic gift.

Since 1933 Chabot didn’t have a studio in the city centre, but lots of his work was stored in his brothers studio in the centre. On 14 May 1940 this studio, which contained a great many paintings and sculptures by Chabot, was burned to the ground in the German bombing raid. Moreover, during the German occupation his work was declared ‘degenerate’, which led, according to his biographer Leo Ott, to the destruction of one of his public sculptures. Fortunately, The Soccer Player, strongly moulded in concrete as well as rough and powerful in appearance, was one that remained untouched.