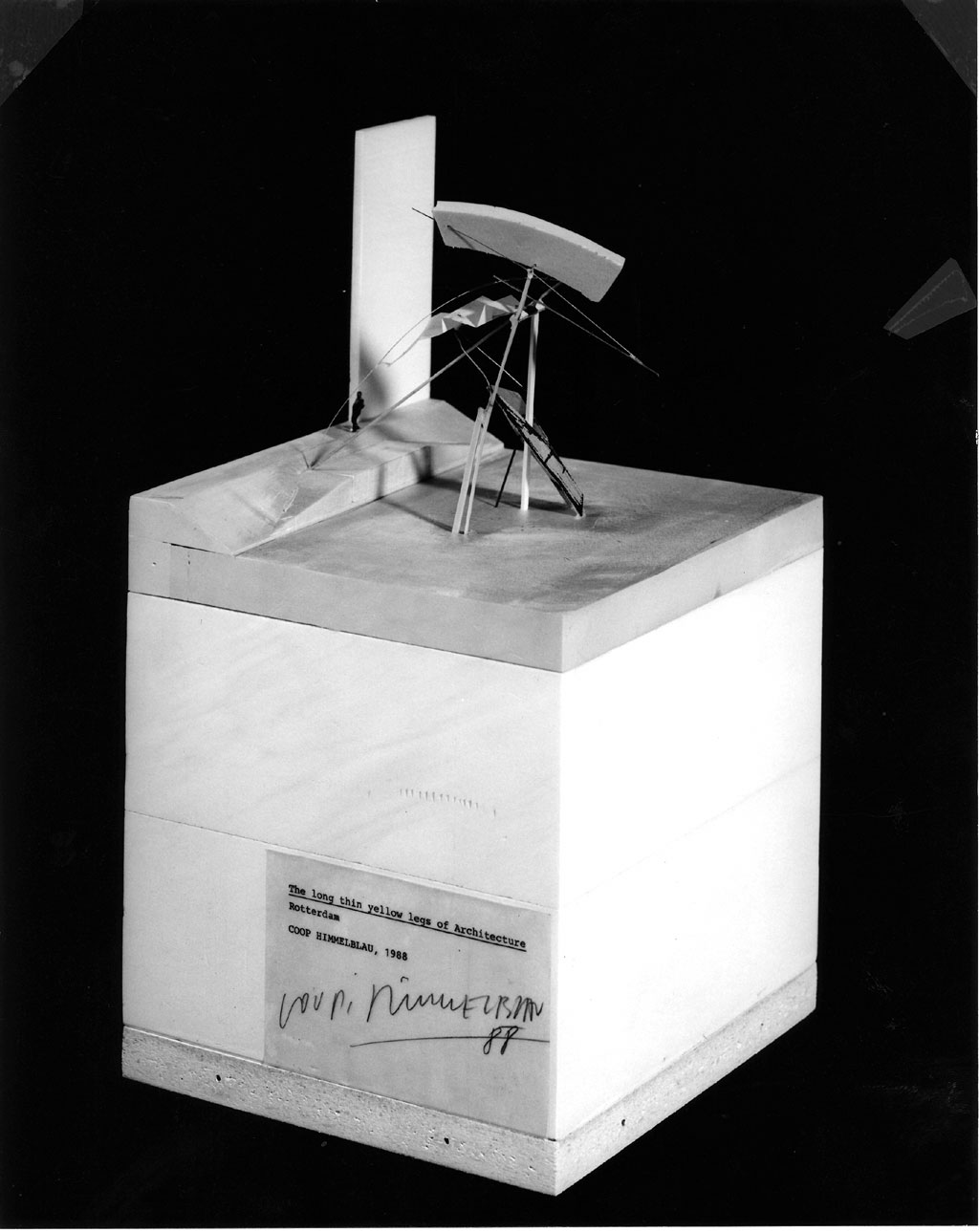 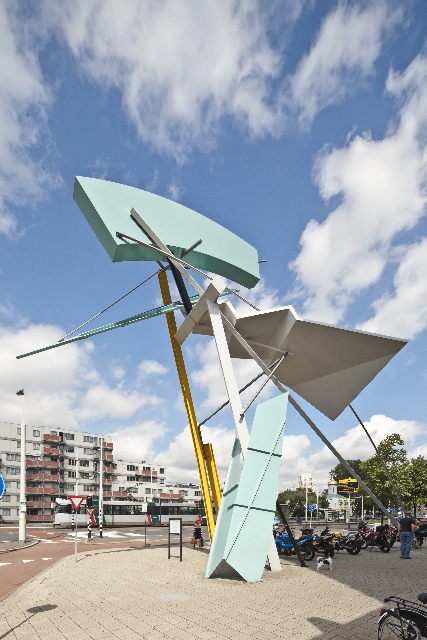 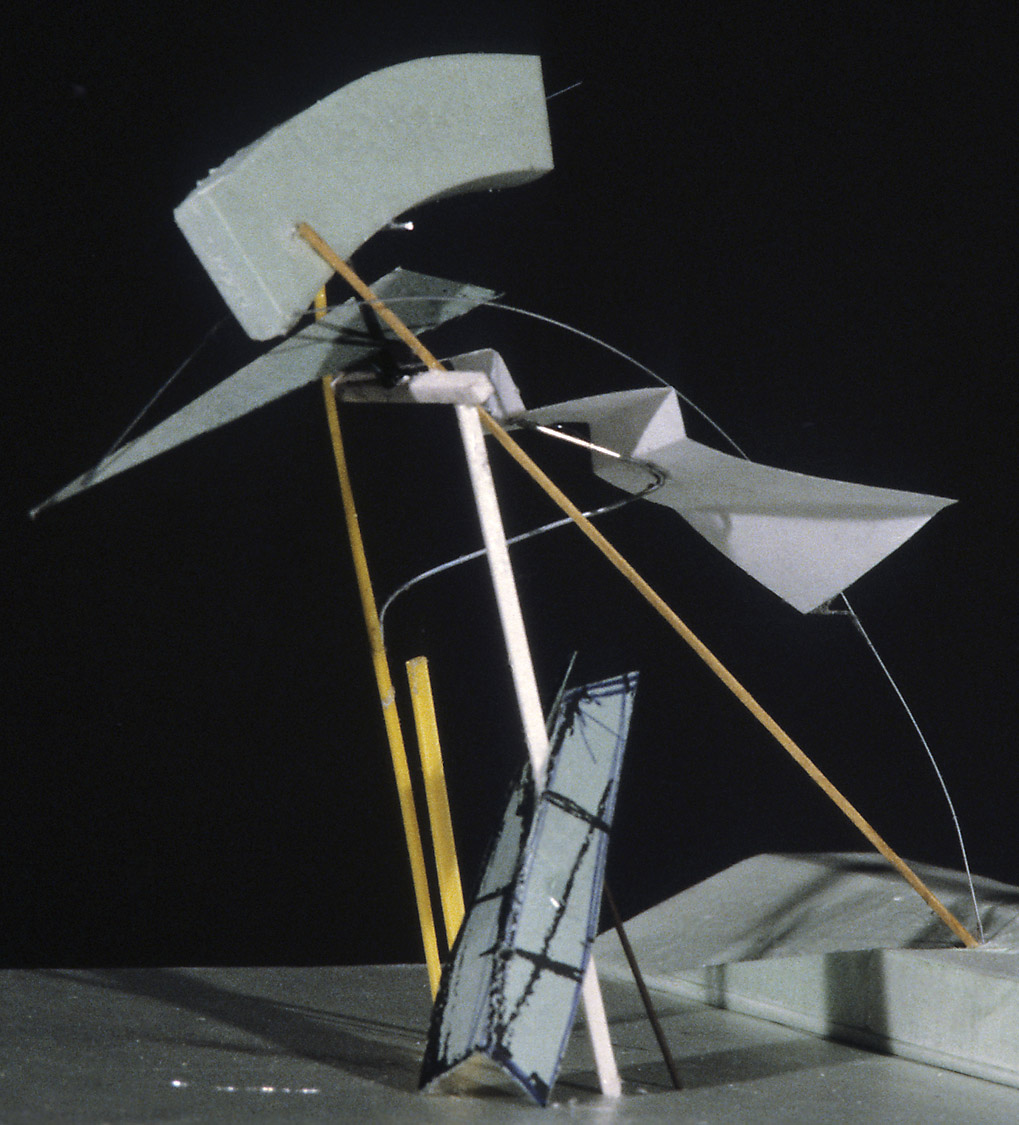 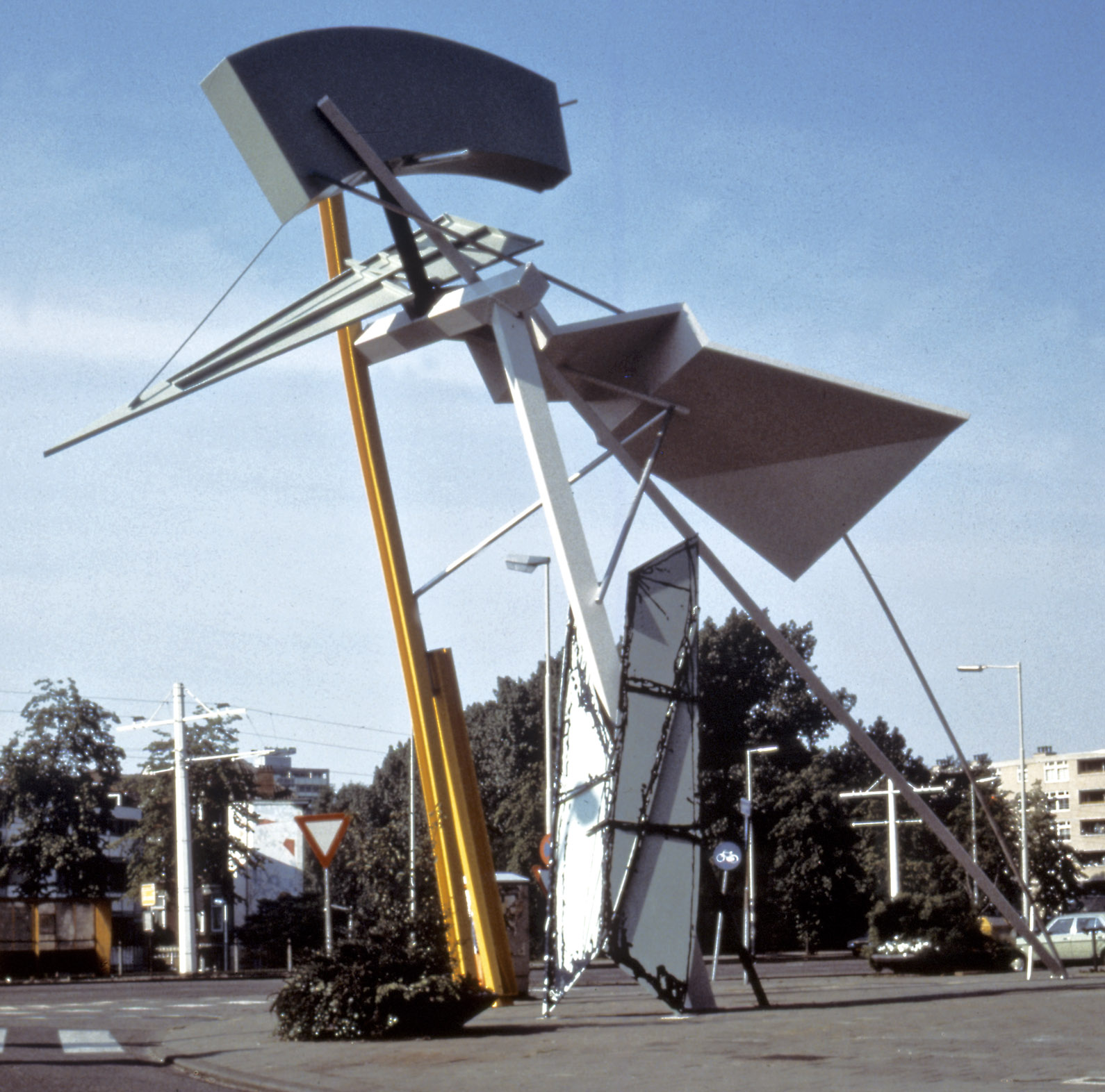 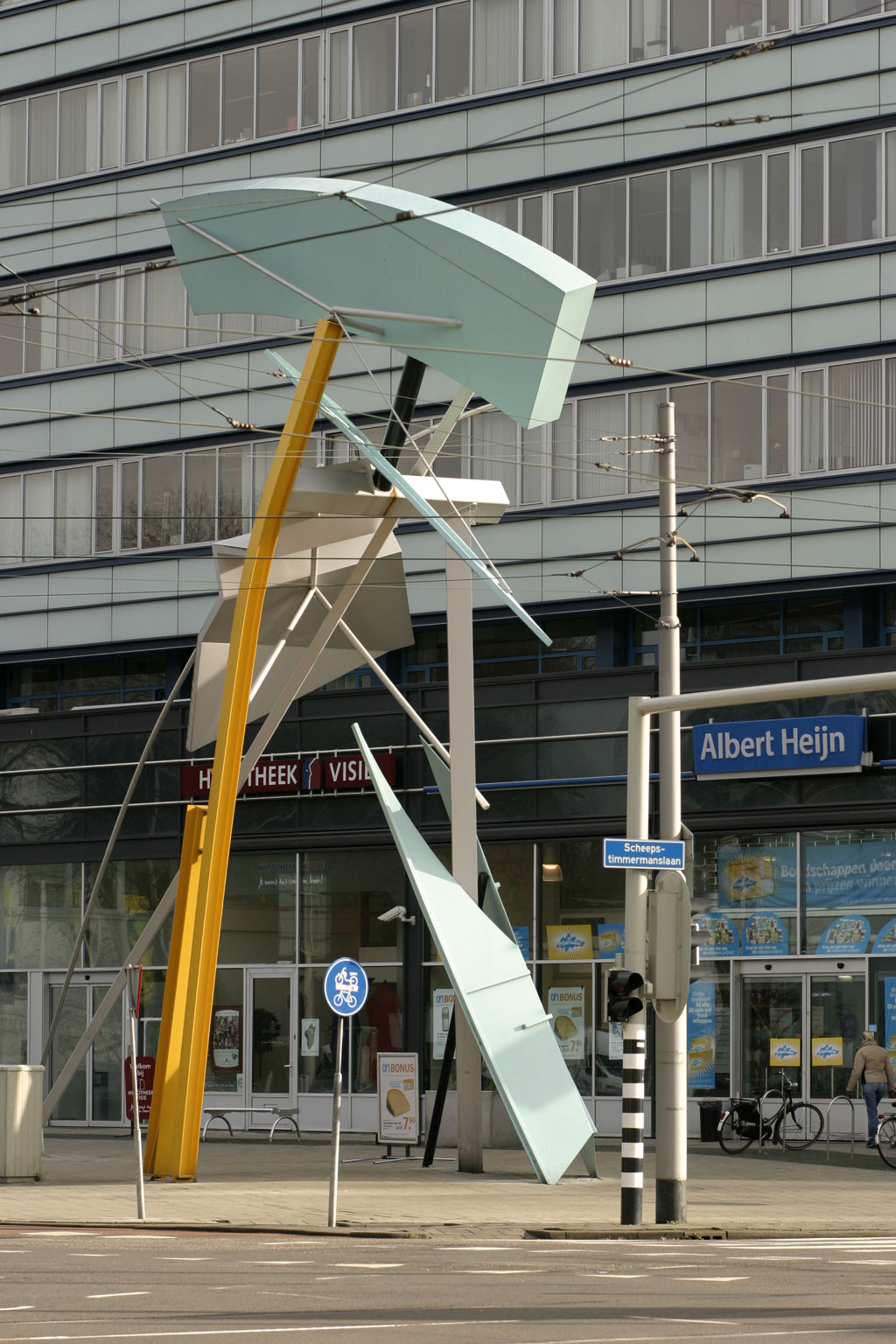 In 1988 Coop Himmelb(l)au designed a Deconstructivist sculpture with the title The Long Thin Yellow Legs of Architecture. The sketch for the sculpture emerged, as with Coop Himmelb(l)au’s architecture, ‘ … in a brief moment during the design process – a moment that was delayed for as long as possible. They devoted lengthy discussions to the function, materials, light and atmosphere of the construction. During these preparations they made as few visualisations as possible, saving the design itself for a moment of inspiration: a nervous scribble, which is rather meaningless to the outsider.’
[From: Jan van Adrichem, Karel Schampers, Reyn van der Lugt (eds.), Beelden in de stad, Utrecht 1988, p.64].

Coop Himmelb(l)au’s intuitive working method has resulted in expressive buildings and sculptures, including the sculpture made specially for Rotterdam: The Long Thin Yellow Legs of Architecture. It is an open construction of steel plates and beams. The materials, which come from the functional world of the building industry, contrast with the result, which is non-functional. The playful forms suggest a lightness that is at odds with the sculpture’s scale, an effect that is emphasised by the use of colour: the heavy steel plates and beams are painted mainly in light colours such as yellow, white and sky blue.

The members of Coop Himmelb(l)au take the results of the aforementioned design sessions extremely seriously. Two-dimensional notations are enlarged and translated into three-dimensional models, which serve as the basis for the technical execution of the work. Even the smallest details in the scribble are taken seriously. This makes it all the more remarkable that when the sculpture was last repainted the black shading on the lowest steel plate was not reinstated. 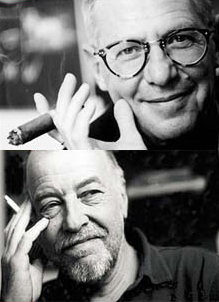 The duo Coop Himmelb(l)au is made up of Wolf D. Prix, born in Vienna in 1942, and Helmut Swiczinsky, born in Poznan (Poland) in 1944. Both studied architecture at the Technical University in Vienna, and at the Architectural Association in London. In 1968, they started a partnership, and the duo has been working solely on joint projects since that time. In the Netherlands, Coop Himmelb(l)au is chiefly known for designing the pavilion of ancient arts at the Groninger Museum (1994).

The name Coop Himmelb(l)au is, in several ways, a reference to their methods. ‘Coop’ stands for cooperation and refers to collaboration. Himmelb(l)au may be read as ‘Himmelblau’ or ‘Himmelbau’; both words indicate the type of free and open architecture they advocate. The expression of this philosophy may be seen particularly in the deconstructivism, a movement that Coop Himmelb(l)au adhered to until late in the 1990s. Within this movement (which fit particularly well in the post-modern spirit prevalent during the 1980s), people were not looking for harmony and synthesis, but instead, they sought fragmentation, chaos, contrast and movement in their designs.

Although Coop Himmelb(l)au consists of two architects, their approach displays a kinship with the plastic arts. Particularly at the start of their partnership, Prix and Swiczinsky organised

a number of happenings; a phenomenon from the visual arts world. Their manifesto is not functionally oriented, but instead, adheres to the – contrary – gridless composition of plastic arts manifestos: “We want architecture that has more to offer. Architecture that bleeds, exhausts, that turns and even breaks, as far as I am concerned. Architecture that glows, that stabs, that tears and rips when stretched. Architecture must be precipitous, fiery, smooth, hard, angular, brutal, round, tender, colourful, obscene, randy, dreamy, en-nearing, distancing, wet, dry and heart-stopping. Dead or alive. If it is cold, then cold as a block of ice. If it is hot, then as hot as a tongue of flame. Architecture must burn!” [From: Gründungsmanifest Coop Himmelb(l)au, 1968].
Back to overview