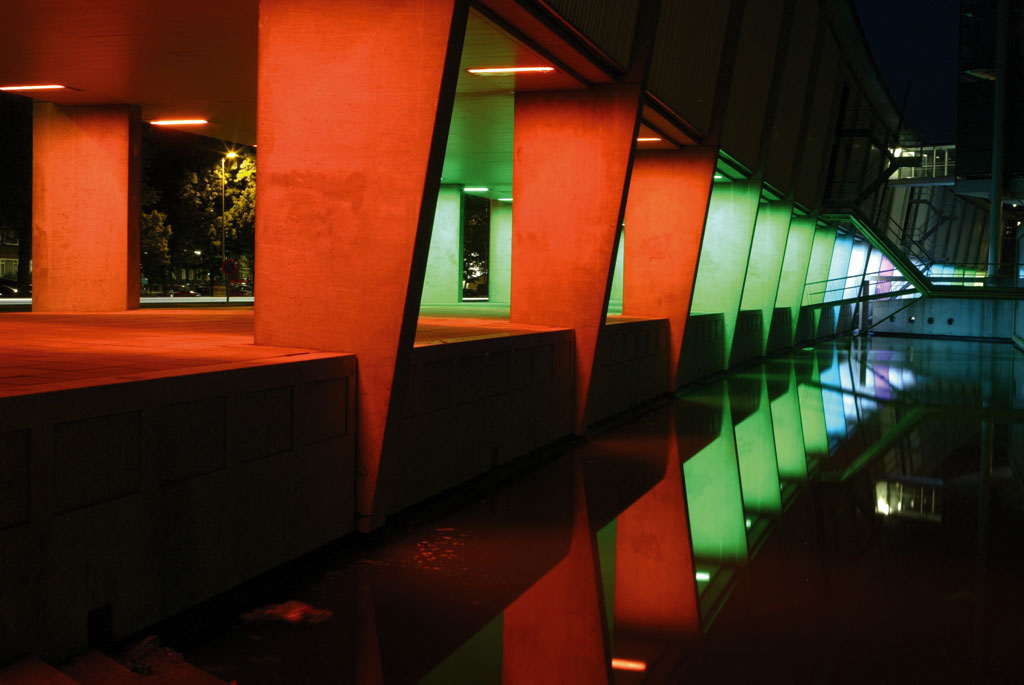 As night falls one cannot miss Peter Struycken’s art work in the colonnade under the Netherlands Architecture Institute. Every ten minutes another sequence of colours illuminates the 170-metre-long series of concrete pillars. A computer program controls the red, green and blue lamps in order to create a shifting pattern of primary and secondary colours.

Struycken was one of the first artists in the Netherlands to employ computers as an important component in his creative process; he first utilised this technology in 1969. He is perhaps best-known for the series of postage stamps he designed in 1980 depicting Queen Beatrix, in which the monarch’s head is represented by a series of dots. However, this is not typical of his work: Struycken usually works in a non-figurative mode, creating abstract patterns, structures or installations in which light and colour play an important role. It is therefore not surprising that Struycken has also designed sets and lighting for the theatre.
He was also one of the first Dutch artists to make large-scale contributions to buildings and other public sites.

Between 1964 – when he was only twenty-five years old – and 1976, Struycken headed a special department for ‘environmental art’ at the Academie voor Beeldende Kunsten in Arnhem. The history of Struycken’s commissions in Rotterdam demonstrated that even seemingly robust works can also be vulnerable. Of his five projects in the city, three have already disappeared or are in a poor condition. Vandalism, rebuilding and changes to building’s functions have all taken their toll. The illuminated columns of Rotterdam’s ‘palace of architecture’ are now such a landmark that the future of this light sculpture seems guaranteed. (DvT)

Peter Struycken has a lengthy record of service in the area known nowadays as ‘art in the public space’. In 1963, the year he had his first solo exhibition of paintings at age 24, he also won his first commission; to decorate a number of walls in the district post office next to Amsterdam’s Central Station. This commission was followed by dozens more, ranging from modest interventions in an interior, to projects covering an large urban site or building complex.
He has also passed on his experience in this area through art education. From 1964 to 1976, he was joint head with Berend Hendriks of a department of Arnhem Institute for the Arts, where they transformed the traditional concept of monumental art into environmental design, as it was known in the jargon of the time. It was a discipline that sought a direct alliance with architectural design. However, the associated risk of the artist’s contribution becoming invisible amid far-reaching integration is one that Struycken has always managed to avoid in his own production. His monumental works always make an overt artistic contribution to a building or place. Although his work never conforms, like that of many other artists, to the dictates of a given style or material preference, it is always highly individual and recognizable.

The five projects he has completed in Rotterdam over the years are all very distinct from one another. That is partly due to the changes his work has undergone in the period, but also to the different situations for which the pieces were commissioned. His oldest project in the city, the design for a site adjacent to the former Municipal Archives building in Mathenesserlaan (1967-69) is strongly graphic and pictorial in character. He designed a white field with a pattern of black, meandering lines that continue from the paving over the wooden hoarding and the metal fence surrounding the site. For his second commission, a work in the waste processing plant of NV Afvalverwerking Rijnmond (1971-73), he conceived a light-installation using coloured fluorescent tubes which shone between the furnaces creating a mysterious glow throughout the underground space.

A substantial project was the layout of the terrace-like external space of the Medical Faculty. The work was carried out in the period 1968-73, with a small extension in 1977. The taut modernism of the buildings (designed by J.L.C. Choisy from the Delft architecture practice OD205), whose façades are clad in white enamelled panels with round-cornered rectangular openings for the windows, was echoed in the forms, also with rounded corners, of concrete, stone, stainless steel and rubber, which were disposed in irregular groups on the terraces. On the other hand, the clinical look of the complex acquired a counterweight in the expanses of water and the varied greenery in the planters, each of which contains a different ‘wild’ biotope designed by Professor H.C.D. de Wit of Wageningen University.

In accordance with the optimistic ideology of the time, Struycken hoped to ameliorate the working environment of the users of the buildings by activating their senses. ‘If people are to feel good, they must encounter sufficient factors in their daily environment by which, and to which, they can link their individual experiences’, ran the programmatic opening words of his explanatory text in a booklet about the project. The completed work looked splendid at handover, but now only a few shabby fragments remain – a fate not infrequently reserved for monumental works of art, which fall victim to poor maintenance, vandalism and physical or functional changes to the buildings and their surroundings. The work at the archives building is similarly in a neglected condition, and the light-sculpture in the waste treatment plant was dismantled after only a few years.

Struycken’s other works in Rotterdam are, compared to the Medical Faculty project, more limited in their ambitions and more concentrated in their expression. The most recent of these is sited far from residential areas and perhaps therefore is not widely known. Commissioned by the Rotterdam Port Authority in 1993, it is a ‘landmark’ for three large container-handling installations, the ‘Distriparks’ Eemhaven, Botlek and Maasvlakte. Struycken completed the three-part work in 1999. He gave each location a slowly rotating, nine-metre high sculpture mounted on a forty-metre tall steel mast (reused lighting columns from the Van Brienenoord Bridge). Each sculpture consists of two or three linked semi-circular arcs of square cross section. The sides of these forms are painted blue, white and black – colours which stand out beautifully against the dark night sky when spotlit from lights in the masts. The sculptures go through their stately dance, forming ever-changing patterns as they turn, serenely amid the busy docklands with their giant cranes and power masts.

The fifth and final work by Struycken in Rotterdam is the light-gallery under the Netherlands Architecture Institute. Situated alongside a busy road in the city centre, it has become a familiar sight to those who pass the place every evening. The rectangular columns which support the 170-metre long archives building of the architecture museum designed by Jo Coenen are uniformly illuminated by a simple but ingenious system of red, green and blue lamps. The computer-driven system produces a new configuration of primary and blended colours every ten minutes. The colonnade resembles the wings of a stage retreating in a gentle curve to infinite depths. The local resident taking a walk, the courting couple, the skateboarder practising his manoevres, are simultaneously audience and players for one another in this fascinating setting.

Struycken’s involvement with theatre during the last fifteen years has undoubtedly influenced the way he fulfilled this commission. After making his first theatre designs on the invitation of Krisztina de Châtel in 1987, he has worked with considerable regularity on productions of the dancer/choreographer Karin Post. His contribution has sometimes included costume design but generally has related to the stage design and lighting plan. Several years ago, he made a visual programme for television to accompany the symphonic poem Prometheus by Alexander Skriabin, an interpretation using contemporary means of the colour score that the adventurous Russian composer wrote for his own music.

These experiences have sharpened Struycken’s eye for the theatrical aspect of his time-variant colour programmes, an aspect which is present even outside a theatre context, for example in the gallery of the Architecture Institute. The theatrical quality resides not only in the interaction between the colourfully illuminated space, the people who occupy it and their mysteriously tinted shadows, although these clearly play a part; but it appears to have gained a more central role in the colour programmes themselves. Like any good play, choreography or musical composition, Struycken’s recent works using video or other forms of projected light lead the spectator through a carefully planned sequence of events – in his case of a visual nature – with an alternation of fast and slow passages, of seemingly dull passages in which little happens and passages full of drama.