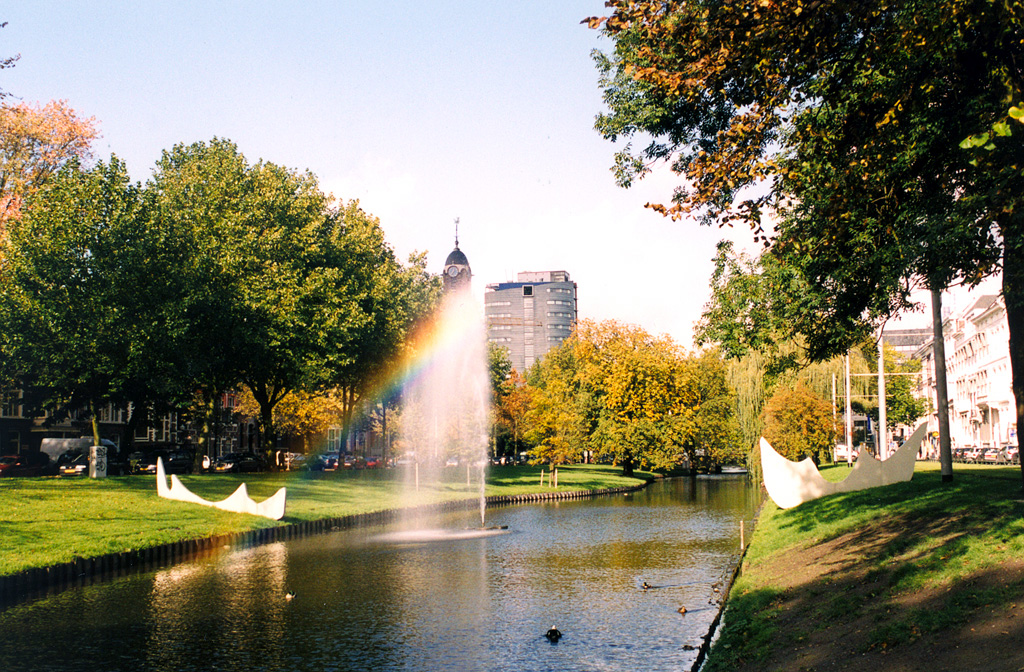 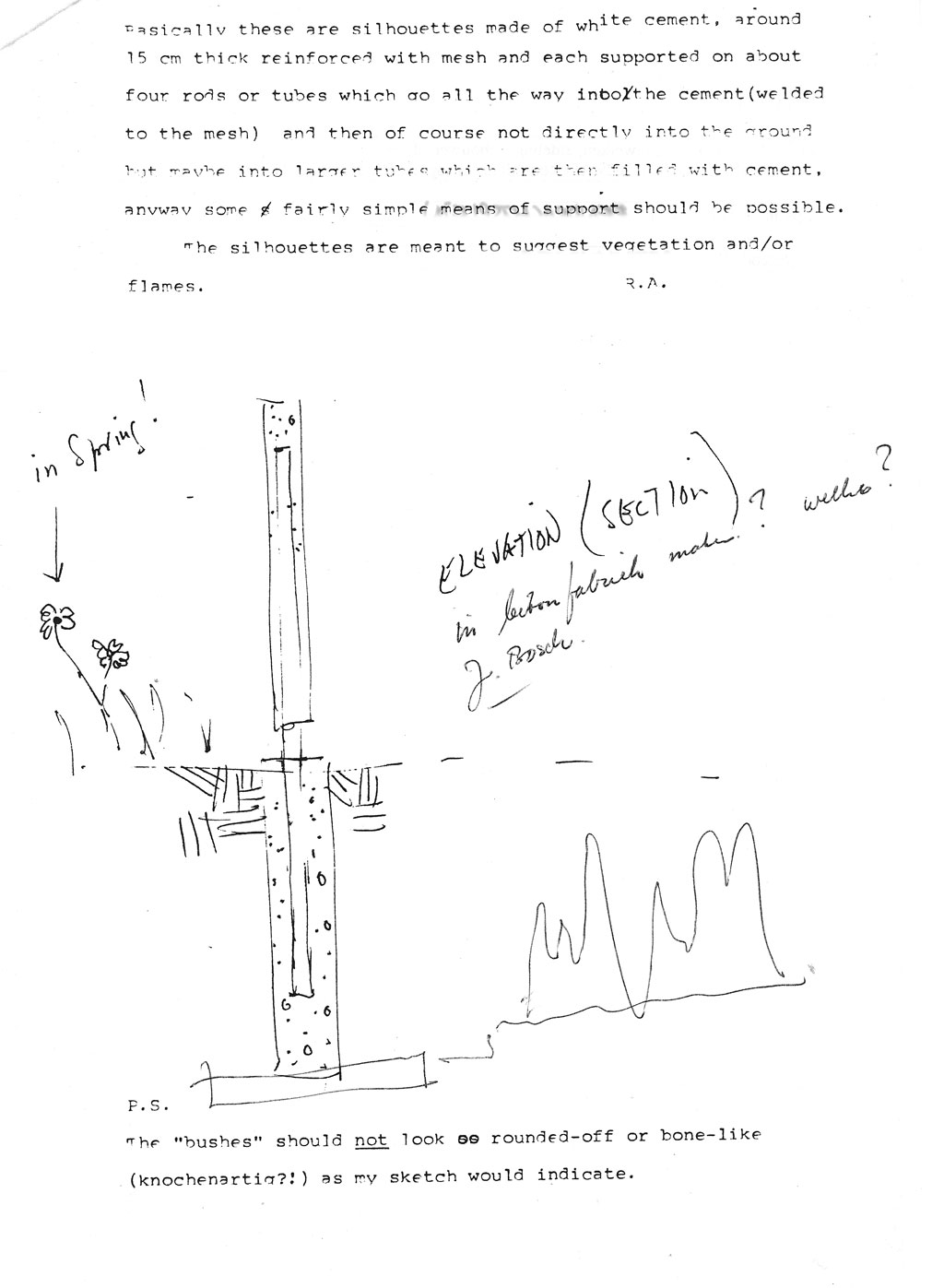 The object that Richard Artschwager made in 1988 for the exhibition Beelden in de stad (Sculptures in the City) can be seen as an exceptional work within this American artist’s intangible oeuvre. The work comprises two concrete objects, 15 cm thick, with peaked forms. They are placed on the sloping embankments on each side of the canal, perpendicular to the water. The white forms stand out against the grass and the organic forms contrast with the urban context.

The sculpture is abstract: it does represent any subject or scene. The work is also untitled. Nonetheless, Artschwager uses this work to play with the viewer’s expectations. In the catalogue for Beelden in de Stad, Artschwager associated the sculpture with an image for each of the seasons, spring, summer, autumn and winter: flower, flame, fence and ice. Thus he seems to ridicule the notion that an art work can have a single interpretation or a fixed meaning. 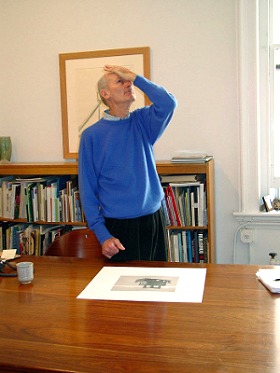 Richard Artschwager was born in Washington, D.C. in 1923. He studied at Cornell University at Ithaca and was taught painting by the Cubist painter Amédée Ozenfant in New York. He initially earned a living making furniture.

Artschwager’s oeuvre consists of paintings, drawings, photographic works and objects. His works do not surrender their meaning easily and Artschwager often leaves the viewer feeling puzzled. His paintings are executed in a Hyperrealist style with a strong perspective. By choosing a background with a strong relief, which draws all our attention, he consciously destroys the effect of depth. He also seeks discrepancies between our perception of various visual effects in his so-called ‘furniture sculptures’. These resemble real items of furniture, but are in fact imitations. They cannot perform the functions they appear to suggest: a chair is too tall to be sat upon and, upon closer inspection, a table with an overhanging tablecloth turns out to be a block of painted Formica. Artschwager works in the gap between what something is and how it appears: between art work and object. Artschwager frequently uses industrial materials such as Formica, Perspex and scouring pads. He is particularly fond of Formica, which is available in a great variety of wood patterns, because of its misleading visual effect. Sometimes he paints the faux bois decoration by hand.

Over the decades Artschwager has worked in a variety of ways and his works have been designated as Pop Art, Minimalism and Conceptual Art although his work never seems to fit wholly within any of these categories.

Artschwager has another, drastically different kind of work to his name, in which the materials used are far less crucial. It is this category of works, the blps, that has prompted his identification with Conceptual art. Blps are oblong shapes with a profile somewhat like that of drug capsules. Artschwager himself has compared the blp shape to a CinemaScope screen with rounded corners. The blps may be made of almost any material as long as it is not too ‘flashy’. Formica and Celotex are rarely used, and most blps are simply painted onto walls. Artschwager applied his blps in countless different public locations during the late sixties and the seventies, sometimes with permission and sometimes clandestinely. His contribution to Sonsbeek buiten de perken in 1971 was a trail of blps through the city of Utrecht. Unremarkable though the blps may be in themselves, when applied as unobtrusive graffiti they are sufficiently enigmatic and disturbing to attract attention. They do not function as ‘art in public space’ but as ‘tags’ which catch the eye precisely through their manifest pointlessness.

The object at Westersingel, Rotterdam, which Artschwager made for Sculpture in the City, looks like a generic modern sculpture, a parody of modern art in the public space. Made of concrete, it is abstract and relatively elegant in its form. It consists of two parts, one on each side of the canal. Each concrete slab stands at right angles to the waterside and has a whimsical upper margin with several large ‘waves’. Although the sculpture is non-figurative and is untitled, Artschwager supplied it with references for every season: flower (spring), flame (summer), fence (autumn) and ice (winter). As in his furniture pieces, he is playing here with associative clichés that give his sculpture a slightly subversive quality.

It is not unusual for works like this to acquire a popular nickname. In this case, the sculpture has been punningly dubbed De Watertanden (literally ‘The Water Teeth’ but also meaning ‘mouthwatering’). The fact that the work has been honoured with a sobriquet indicates that it was noticed and became a topic of conversation when first placed; for modern art is prone to provoke ironic or even decidedly inimical commentary among members of the public who are less than convinced of its importance. It is ironical that Artschwager has achieved such an effect with a work that looks old-fashioned, like an obligatory modernist work from the 1960s. Because of its apparently conventional nature, this work is as teasing and thought-provoking as the blps.