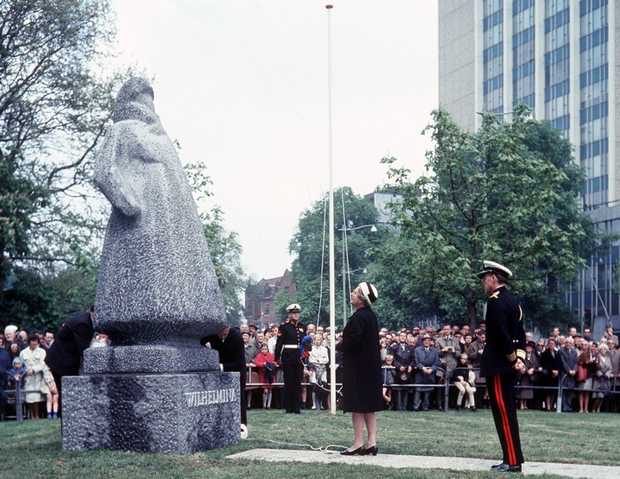 The sculptor Charlotte van Pallandt was a friend of Queen Juliana, of whom she made several portraits. The sculpture of Queen Wilhelmina was unveiled in Het Park in Rotterdam in 1968. It is executed in bluestone, a material that was considered appropriate to Queen Wilhelmina’s personality.

The sculpture aims to show her in all her simplicity, as the mother of the people, not looking down on the people, but looking up to them. This portrait expresses her indomitability, courage and determination, or as Winston Churchill said of her during the war: ‘There is but one man and that is Queen Wilhelmina’.The robust triangular sculpture typifies Queen Wilhelmina, wearing her long coat with a broad fur collar and a hat that almost covers her face. With her arms straight by her sides, she makes a resolute impression. The monarch’s personality is captured more in her stance than in her features. The face is lacking in detail, yet Juliana felt that the sculpture looked exactly like her mother.

For the design Van Pallandt used photographs that were taken of Queen Wilhelmina during the unveiling of Mari Andriessen’s war monument in Rotterdam in May 1958. The artist made numerous designs for the sculpture. She initially conceived it in bronze and made a bronze model approximately 20 cm in height. When the model was translated into a metre-high plaster version, it was decided to execute the final sculpture in stone. The plaster mode was mechanically enlarged in stone measuring three metres. It was then prepared by a stone carver in Haarlem before being transported to Van Pallandt’s studio in Noordwijk for the final carving.

Charlotte Dorothée Baroness van Pallandt was born in Arnhem in 1898. She came from an aristocratic family, which initially hindered her career as an artist. She wanted to become a painter but her family was against it. In 1919 she married a highly placed diplomat, with whom she lived for several years in Berne in Switzerland. She left her husband in 1923 and moved to Lausanne to follow lessons in painting.

In 1926 she settled in Paris, then the centre of modern art. She was taught painting by André Lhote and became acquainted with the Armenian sculptor Hakob Gyurjian, who advised her to take up sculpture. She followed lessons with Charles Malfray and Charles Despiau and she was influenced by the work of artists including Aristide Maillol. Van Pallandt stayed mainly in Paris until 1939, although from 1930 she was already a member of the Nederlandse Kring van Beeldhouwers (Dutch Circle of Sculptors).

Van Pallandt returned to the Netherlands at the outbreak of the Second World War. She met the sculptor Albert Termote, who gave her valuable technical advice. Her work deals mainly with the human body: not the anatomical structure, but the relationship between planes and volumes. She was more concerned with portraying a person’s inner character than with providing a superficial likeness.

In 1958 she represented the Netherlands at the Venice Biennale, but she would not attain widespread recognition as a figurative sculptor until 1968, when she produced the sculpture of Queen Wilhelmina in Rotterdam. On her seventy-fifth birthday she was invested as an officer in the Order of Oranje-Nassau. In 1980 she won the Singer Prize. She continued to make portraits late in life. She died in 1997 at the age of 98 at her home in Noordwijk.

Baroness Charlotte van Pallandt – although she was raised in an extremely protective setting – was allowed to take painting lessons with Albert Roelofs, son of the well-known painter Willem Roelofs. In 1919 she married but four years later left for Lausanne to undertake serious art training with the painter Arnold Loup. When Van Pallandt left for Paris in 1926 she intended to devote herself entirely to art. It was particularly the period in Paris when she was apprenticed to the sculptor Charles Malfray that contributed greatly to her development as a sculptor. However, Van Pallandt also wanted to follow her own views on art and not imitate the style of any particular mentor. She visited Zadkine’s studio and remarked: ‘All his pupils make little Zadkines. I simply ran away. He was furious.’ Malfray, however, gave her the freedom to work as she wanted and she learnt how to deal with spatial composition, human anatomy and the effect of light and shadow. Her realistic language of form was in keeping with the neoclassical trend of the 1930s, which had already begun in the early twentieth century as a reaction to the new abstract forms of expression. Her ultimate aim was to simplify her work as much as possible.

By the age of 60 Van Pallandt was chiefly producing portraits of older people, their faces lined with age. The best known are the head of Queen Juliana (1955) and the memorial to Wilhelmina, Queen of the Netherlands from 1898 untill 1948. In these portraits the physical likeness is not so important as Van Pallandt’s interpretation of the personalities of both queens.

In the year of the queen’s death, 1964, chairman of the Kamer van Koophandel (chambre of commerce) K. P. van der Mandele initiated the realisation of a memorial to Queen Wilhelmina. Funding was raised by a committee formed by trade and industry and inhabitans of Rotterdam. In 1966 the artist was commissioned by this committee to make the memorial. It was the committee’s wish to portray Wilhelmina as the queen of the resistance movement. People remembered her best by how she returned from England to liberated Holland in 1945 – indomitable and optimistic as ever. Van Pallandt also associated the queen with the war and wanted to depict her ‘as she was known by her people. She is a monarch, proud, alone. She was a good person, but not easy. Mother of the fatherland’. A newspaper photograph – at the unveiling of Mari Andriessen’s memorial to the resistance movement in Rotterdam – inspired Van Pallandt to make this monumental sculpture of the monarch – pyramid shaped, stalwart and soldier-like. The one arm outstretched, gives the sculpture a certain affability, an approachableness. The enormous coat the figure is wearing, which spreads out and almost touches the ground, the large fur collar and hat are sufficient to recognize the queen – this being typical of her dress. Almost at the same time Mari Andriessen produced a similar sculpture of Wilhelmina (1965-1967, Wilhelmina Park, Utrecht) in the same characteristic pose and the same voluminous coat. His Wilhelmina, however, is in bronze, gives more detail and is more accessible due to its smaller size.

Originally the face of Van Pallandt’s work lacked detail, but in 1967 she experimented with clearer facial expressions on a specially made one metre high plaster model. When Queen Juliana had made critical remarks about the likeness, Van Pallandt decided to leave the detailing out after all. This way too the face catches more light. The original plan to cast the sculpture in bronze was abandoned the more the sculpture progressed. It was finally hewn in freestone in order to stress even more the massive monumentality of the work and the concept of indomitability. At stonemasons in Haarlem two immense lumps of stone were precut after an actual-size plaster model of the work. In 1967 the freestone was transported to Van Pallandt’s studio at Noordwijk where she was able to complete it. The stone’s entire surface was left rough in order to reinforce the impression of spirit and invulnerability.

From this monument, unveiled in 1968, various examples have been repeated.
Van Pallandt, who normally did not allow large editions of her work to be made, placed no restrictions on the sculpture of the queen. The first sketch for the Rotterdam memorial, only 17 cm high, has been cast in bronze ten times. There is also a sculpture 53 cm high, cast six times. A bronze version in the Second Chamber is around one metre tall.

During the 1980s two casts in bronze were made from the large Rotterdam monument. One of these is in the collection of the Hannema de Stuers Fundatie in Heino as is the earlier mentioned actual-size plaster model. The other bronze version has stood since 1987 on Paleisstraat in The Hague across from Noordeinde Palace. Since 1984 the city had plans for a monument to Wilhelmina and after years of indecision about what this should be, Van Pallandt’s sculpture was finally chosen as a not highly original compromise. Thus The Hague gained its own ‘Iron Lady’.