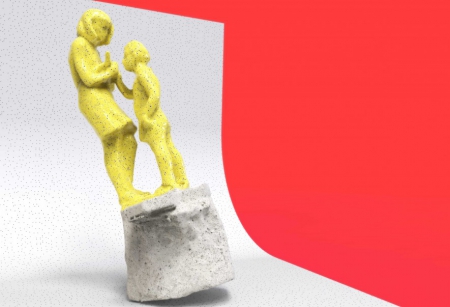 Temporary sculpture garden Uproot Rotterdam brings together a number of Rotterdam sculptures, and aims to tell the story of the role played by visual arts in the reconstruction of Rotterdam. BKOR (the Fine Arts & Public Space Programme) and Sculpture International Rotterdam commissioned Studio Makkink & Bey to design the story of these uprooted sculptures and their original locations.

In collaboration with CBK Rotterdam, Studio Makkink & Bey decided to literally ‘uproot’ the scattered and relocated sculptures, in some instances from their neighbourhoods and districts, and in other instances from the Municipality of Rotterdam’s art depot. In the Museum Park, they will be placed close to each other, making them a symbol of the constantly changing nature of art and the city.

“This presentation may have an accidental and curious character, but by presenting the works in conjunction with one another it highlights at least one crucial aspect of Rotterdam’s development after 1940: the [artist’s] desire to tell the story of Rotterdam through visual art. If there’s one thing that Uproot Rotterdam expresses, it’s this: resilience, a desire for the future and celebration of the public good.” – Siebe Thissen (BKOR).

Program
Over the course of the exhibition Studio Makkink & Bey will collaborate with various invited designers, artists and architects to stimulate a contemporary cultural reconstruction. “The reconstruction of the city of Rotterdam, first commenced on 15 May 1940 just after the bombings, was undertaken by architects of the day not as an attempt to rebuild the same city that had been lost, but to develop a modern city. A catastrophe was transformed into an opportunity. In line with this, from 1 June onwards, the Museumpark will not only be transformed into a temporary exhibition space for collected ‘uprooted’ sculptures, but will also function as a working area where we join forces with invited artists, designers and architects to study a future urban landscape,” explains Studio Makkink & Bey. At the same time, Studio Makkink & Bey is working to involve the neighbouring museums and cultural institutions around the Museumpark, such as a project by visual artists David Bade and Tirzo Martha, in collaboration with the Kunsthal.” Free guided tours will be offered during Uproot Rotterdam.