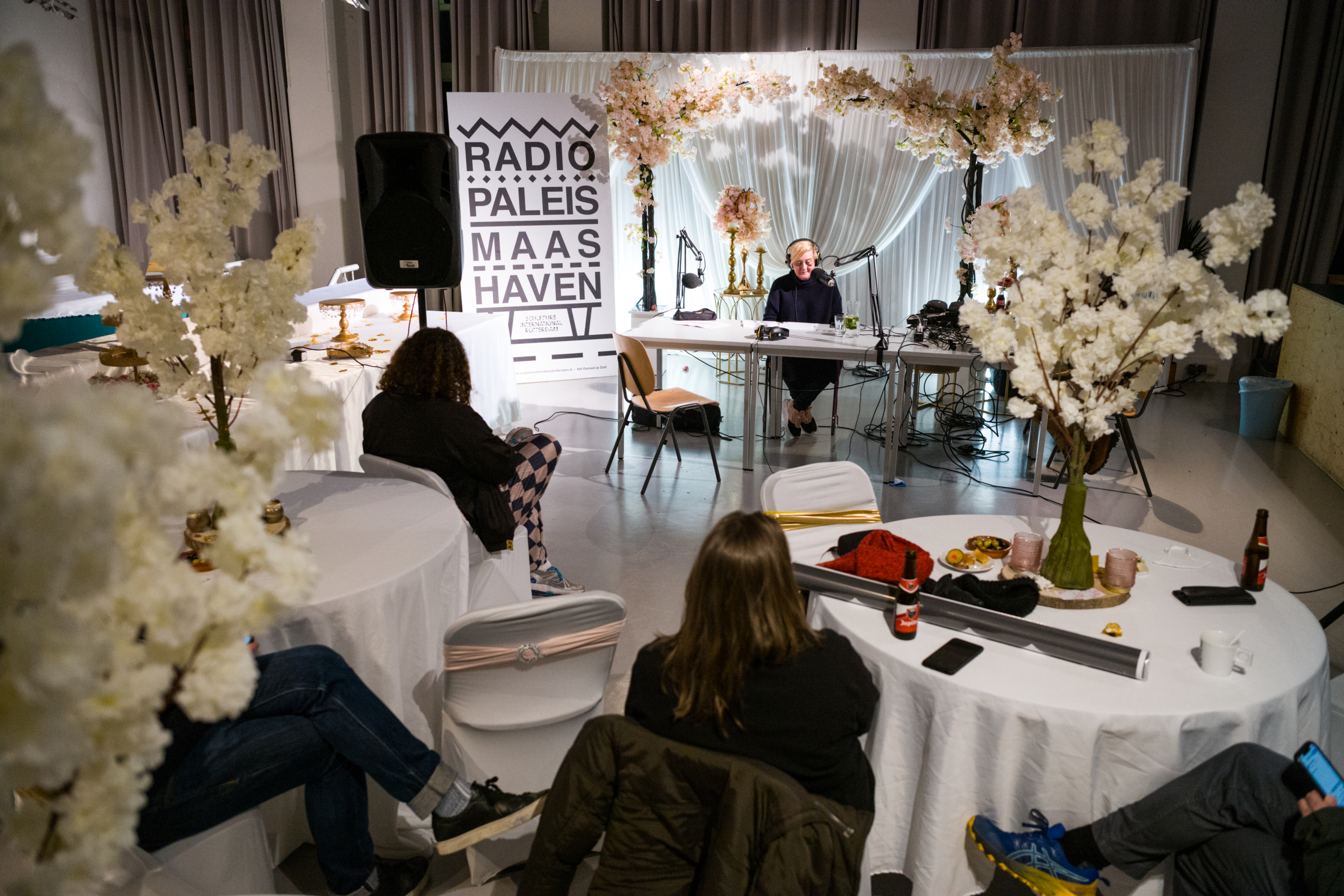 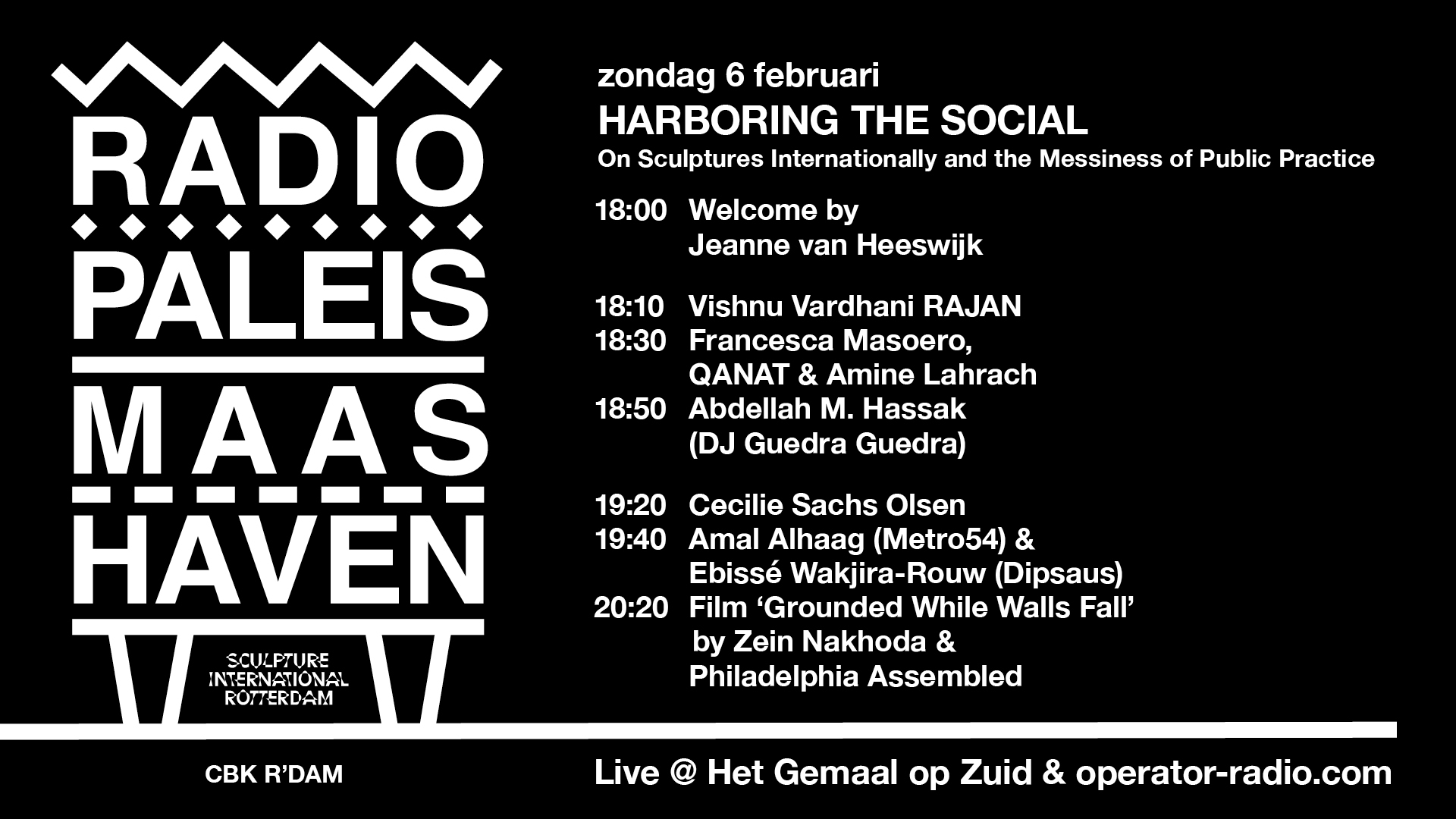 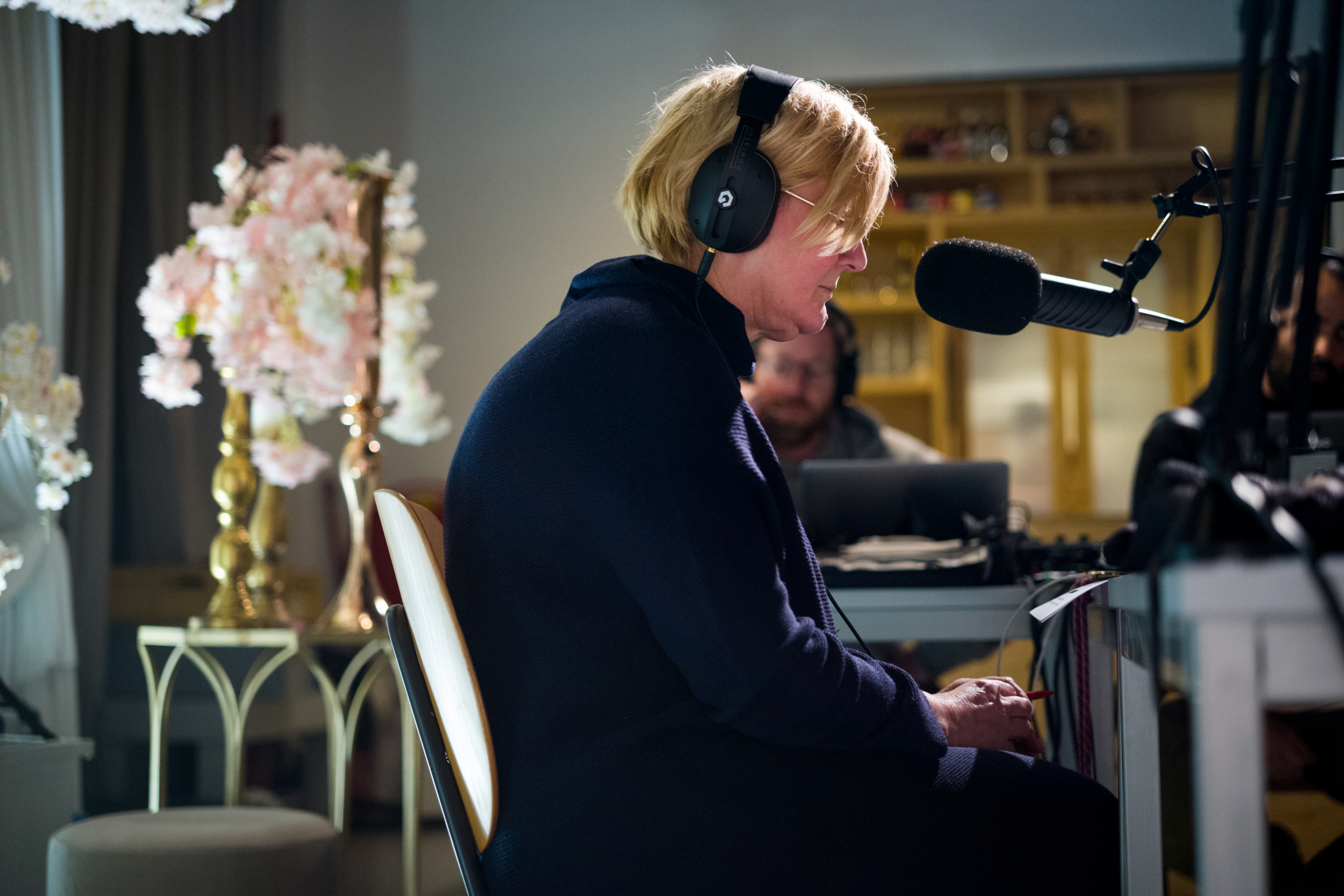 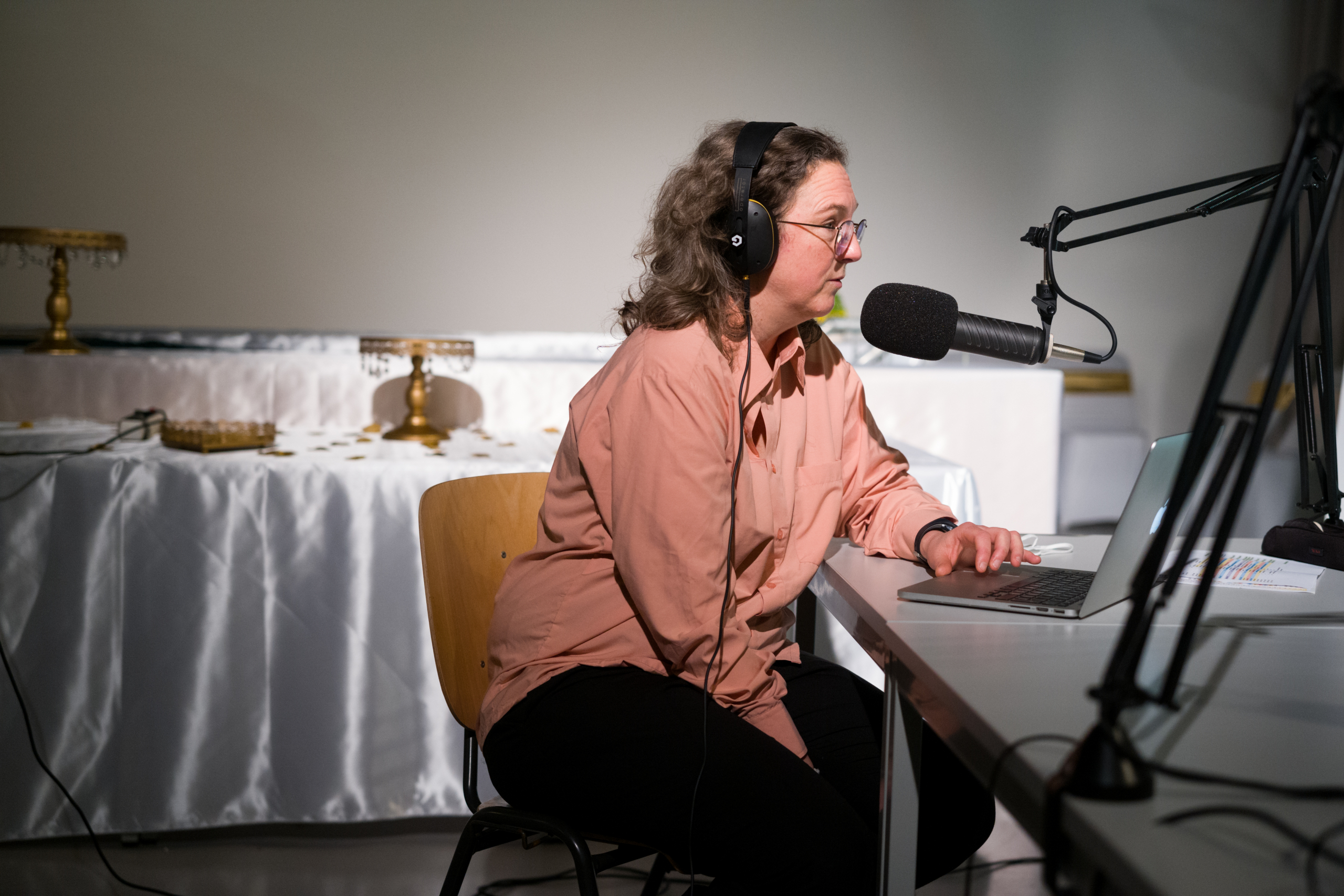 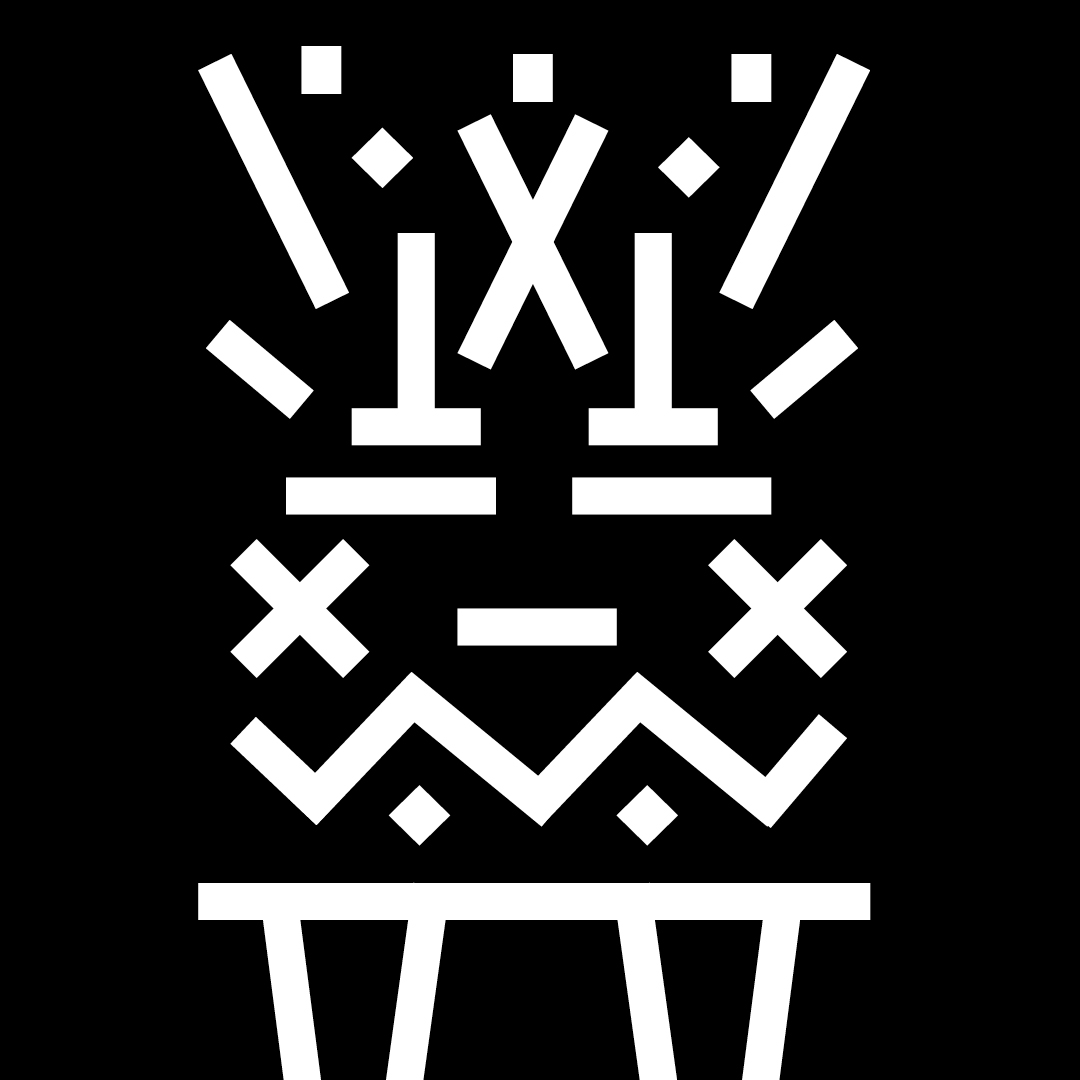 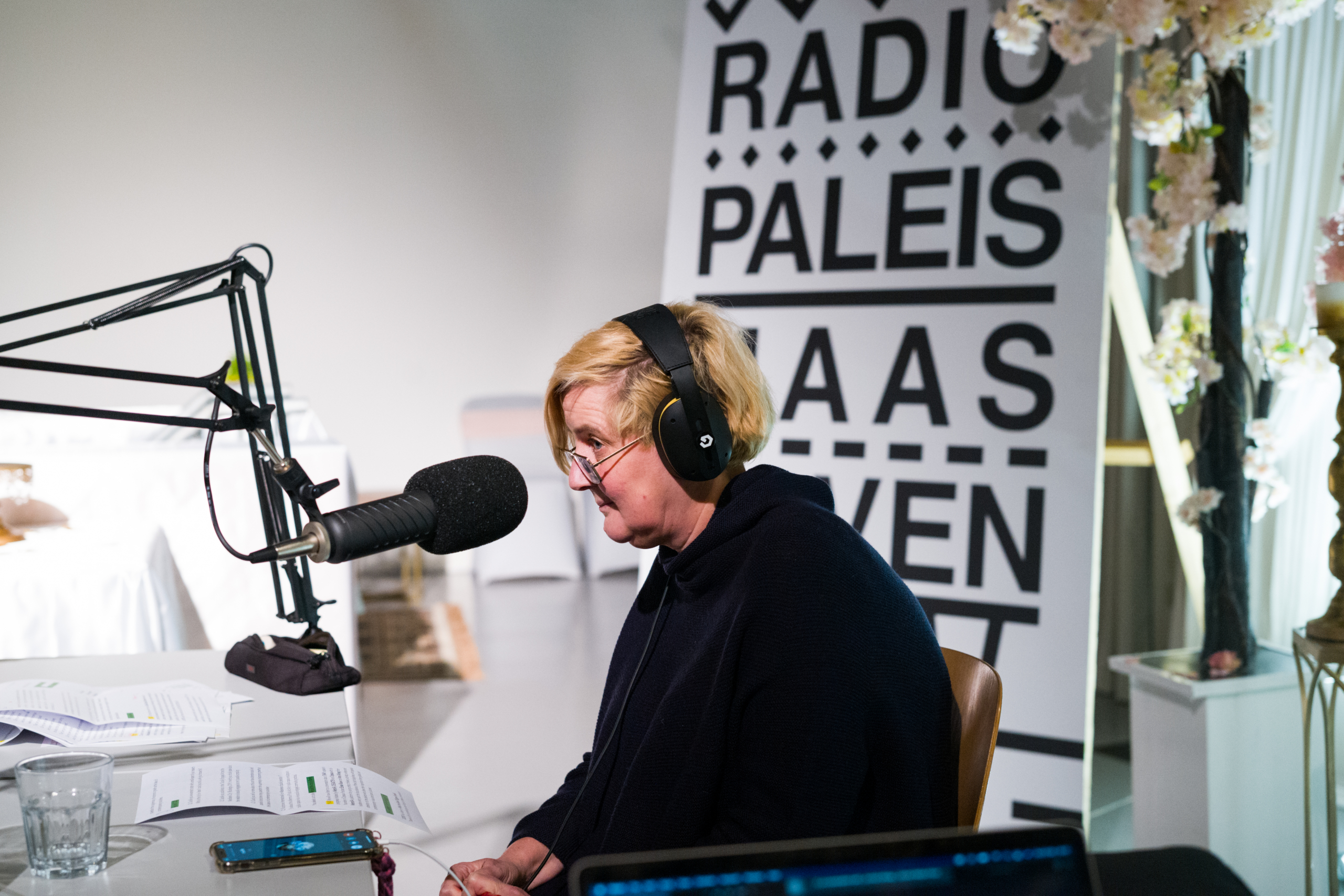 In the second broadcast of Radio Paleis Maashaven hosted live from the Afrikaanderwijk Cooperative in the Gemaal op Zuid, Jeanne van Heeswijk will be in (online) conversation with artists, curators, activists, musicians and researchers about art as public practice.

Harboring the Social is an ongoing research by artist Jeanne van Heeswijk that reflects on caring for each other in a changing city. To open up new spaces for collectivity, solidarity and connection. Taking place over many years with many collaborators resulting in multiple manifestations.

The latest of which is Social Harbor – Moving Words, a light installation, where artists, residents, poets and other makers are invited to reflect on the continuous crisis and the current situation in our city. Exploring questions such as: How do we communicate with each other? How do we give words to our current situation? How do we meet each other? How do we take care of each other? How do we move forward? Everyday displaying new poetic perspectives, stories, statements, calls and messages as part of Studio Paleis Maashaven the installation is attached to the facade of Het Gemaal op Zuid at the Afrikaander @wijkcooperatie , visible from the Afrikaandermarket. These words function as anchors to the ways in which we can live together in this time of ‘global breakdown’.

𝗝𝗲𝗮𝗻𝗻𝗲 𝘃𝗮𝗻 𝗛𝗲𝗲𝘀𝘄𝗶𝗷𝗸 is an artist who facilitates the creation of dynamic and diversified public spaces in order to “radicalize the local.” Her long-term, community-embedded projects question art’s autonomy by combining performative actions, discussions, and other forms of organizing and pedagogy in order to assist communities to take control of their futures.

𝗩𝗶𝘀𝗵𝗻𝘂 𝗩𝗮𝗿𝗱𝗵𝗮𝗻𝗶 𝗥𝗔𝗝𝗔𝗡 (born and raised in Hyderabad, India) is a Body-Philosopher and Performance Artist based in Helsinki. A hyphenated identity, multidisciplinary practices, building connections between art, science, witchcraft, history and cultures define her. Vishnuvardhani.com

𝗤𝗔𝗡𝗔𝗧 is a collaborative platform that explores the politics and poetics of water to reflect and act (up)on the multiple contextual understandings and forms of (re)production of the commons in Morocco and beyond.
Qanat.org

𝗙𝗿𝗮𝗻𝗰𝗲𝘀𝗰𝗮 𝗠𝗮𝘀𝗼𝗲𝗿𝗼 is a curator at LE 18, derb el ferrane, Marrakech, where she initiated QANAT. With a background in critical theory and political economy, her work explores resistances in multiple forms, including testing collective-making processes within and beyond the art field, and researching the politics and poetics linked to watery commons and to forms of being in common otherwise.

𝗔𝗺𝗶𝗻𝗲 𝗟𝗮𝗵𝗿𝗮𝗰𝗵 is an artist interested in performance art, visual art, and slam poetry mainly centered on crisis and Moroccan social and political discourse. Building from everyday idioms and Moroccan social criticism, he seeks to speak from what is normally held as and in common into the discursive field of art. Amine joined Qanat in 2018.

𝗔𝗯𝗱𝗲𝗹𝗹𝗮𝗵 𝗠. 𝗛𝗮𝘀𝘀𝗮𝗸 is a sound artist, DJ and music producer, art director. His research explores processes of participative sonic mapping at the urban level, integrating sound, daily technologies, and radio as tools to foster agency in inhabitants’ narrations of their environment. He develops a musical syncretic Afrofuturism music with field recordings practice as a Producer/DJ (Guedra Guedra).
hassak.net

𝗖𝗲𝗰𝗶𝗹𝗶𝗲 𝗦𝗮𝗰𝗵𝘀 𝗢𝗹𝘀𝗲𝗻 is a research fellow at the Norwegian Institute of Urban and Regional Research at Oslo Metropolitan University. Her work is practice-based and revolves around developing creative methods for urban research and exploring how artistic practice can be used as a framework to analyse and re-imagine urban development, space and politics.

𝗘𝗯𝗶𝘀𝘀é 𝗪𝗮𝗸𝗷𝗶𝗿𝗮 is co-founder of Dipsaus Podcast and publisher of Dipsaus books in collaboration with Uitgeverij Pluim. She also works as an editor for The Dutch Review of Books (De Nederlandse Boekengids) and is head of publications & content at Framer Framed. dipsaus.org

𝗠𝗲𝘁𝗿𝗼𝟱𝟰 is a platform for young artists, thinkers, activists, writers and hustlers who push the boundaries of their (art) disciplines, with special attention to the talents who draw their inspiration from global and contemporary visual and sonic cultures. metro54.nl

𝗚𝗿𝗼𝘂𝗻𝗱𝗲𝗱 𝗪𝗵𝗶𝗹𝗲 𝗪𝗮𝗹𝗹𝘀 𝗙𝗮𝗹𝗹 is a sci-fi documentary focusing on practices of resilience and spiritual grounding among organizers, cultural workers, and social movement builders in Greater Philadelphia. Revolving around the question, “What practices keep you grounded in your work for social change?,” the work explores spirituality, care of self and community, and inner power at the grassroots. From awareness of self and community to connection with ancestors, access to spiritual wisdom and emotional intelligence, centeredness in the body and feeling, as well as one’s own agency and power, the notion of being “grounded” assumes a variety of meanings that form a resourceful foundation of strength in times of profound transformation. Narrated from the compassionate perspective of a post-revolutionary archivist, the film reflects and celebrates a tireless commitment to transformative ways of life serving equity and justice. The film has been made within the framework of Philadelphia Assembled (2017).

𝗭𝗲𝗶𝗻 𝗡𝗮𝗸𝗵𝗼𝗱𝗮 is a filmmaker and organizer who is committed to social change within various media and communities. He is director at Training for Change, a capacity building organization for social justice movements, and has made community and movement media with Scrive Video Center, Philadelphia and Media Mobilizing Project, Philadelphia, as well as independently.

𝗥𝗮𝗱𝗶𝗼 𝗣𝗮𝗹𝗲𝗶𝘀 𝗠𝗮𝗮𝘀𝗵𝗮𝘃𝗲𝗻 is part of Studio Paleis Maashaven, which began as a long-term project by Sculpture International Rotterdam for and about Rotterdam South. Between 19 January and 20 February 2022, Studio Paleis Maashaven will take place in the area between Metrostation Maashaven and Het Gemaal on the Pretorialaan. In and around the Gemaal a number of new and existing artworks will be shown and made. Studio Paleis Maashaven is not only a manifestation of completed art in the public space, but also a period and a place for production, expressly based on the connection with the local context and diversity.

On 4 Sundays there will be a live radio broadcast from the Gemaal op Zuid that can be attended by 25 visitors an online through www.operator-radio.com. Registration is not necessary, full is full. We follow the guidelines of the RIVM. The broadcast will be made available after via Operator-radio.com,Spotify and Soundcloud.
Next dates Radio Paleis Maashaven:
Sunday February 13th, 14.00-17.00h
Sunday February 20th, 14.00-17.00h