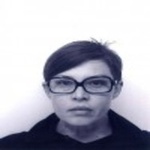 Cosima von Bonin is one of the biggest enigmas in contemporary art. Her most important objective, it would appear, is to remain as indefinable as possible; as a result, it is difficult to establish the hard facts of her life; she deliberately blurs the lines between facts and fiction. There are hardly any photos of her, the few that are available show an indeterminate figure with large sunglasses, which could just as easily be a man as a woman.

In the biographical details that Von Bonin has released, it states that she was born in 1962 in Mombasa, Kenya. She currently lives and works in Cologne. Her art is just as indefinable as she is: she works with textiles and with film, and constructs installations that frequently refer to popular culture, pop art and fairy tales. It is a fact that Von Bonin has a lot of success with these; in recent years, she has exhibited her art in Museum Ludwig in Cologne, Mamco in Geneva, Witte de With in Rotterdam and the Museum of Contemporary Art in Los Angeles.