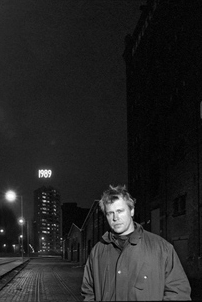 John Körmeling was born in 1951 and studied Civil Engineering at the Technische Universiteit in Eindhoven, where he is still based today.

His work, a cross-over of sculpture, architecture, urban planning and design, consists of projects (both realized and unrealized) and ‘good ideas’; that respond to the various notions of space and the use thereof. Körmeling’s projects seem to emanate from a humorous and profound sense of anti-conformism, aimed against the paralyzing operation of rules and conventions in Dutch urban planning, something which Körmeling once referred to as “finicky work in tiny spaces”. His own, alternative solutions are often disarmingly humorous, at times vicious and tormenting (as illustrated, for example, by his sketch for a city hall provided with the large roof text “WHILE YOU ARE WORKING”). His projects show that the unadorned idea, a plain and no-nonsense solution, is often perceived as odd or even absurdist. His solution for parking problems include, amongst others, a mobile parking carpet to be rolled out at a place of your own liking. The proposal “No Bridge”(1991) for the Zocherpark in Utrecht simply ponders the idea of doing nothing; for it is sometimes better, desirable even, not to place a bridge. These ideas remind us of the fact that we often try to wriggle our way out of an obstacle that we have placed there ourselves; a situation that, once you think about it, is as absurd as a good joke by Körmeling.

Körmeling’s works are included in a number of museum collections, amongst which those of the Van Abbemuseum in Eindhoven and the Museum Boijmans van Beuningen in Rotterdam, and can also be seen in various places in the (semi-) public domain. In 2010, his Happy Street project was selected for the Holland Pavilion of the World Expo in Shanghai.