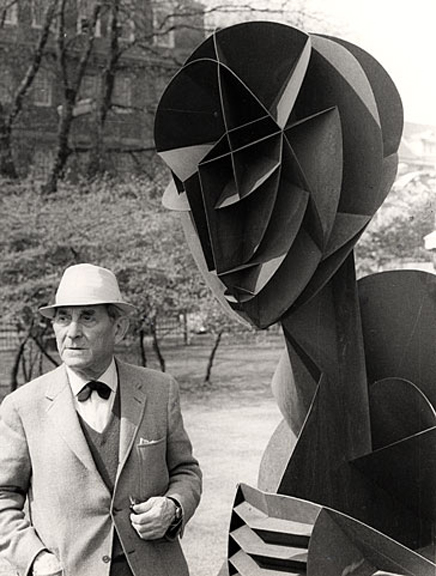 Also see our Naum Gabo website and become a friend of Gabo: www.naumgabo.org

Naum Gabo (1890-1977) was one of the pioneers of modern sculpture. Instead of wood, stone and bronze he used new industrial materials such as acrylic glass and plastics. In his abstract, spatial constructions, mass and volume ‘the cornerstones of traditional sculpture’, made way for transparency and an apparent weightlessness. A truly modern feature of Gabo’s work is that he was inspired not by nature but by concepts from the exact sciences.

Gabo is usually counted among the Russian Constructivists, however he spent relatively little time in Russia. In 1910 Gabo moved to Munich where he studied medicine and then engineering. In this period he discovered art, attended classes with the famous art historian Heinrich Wölfflin and made trips to Italy and Paris.

He produced his first sculptures at the beginning of the First World War when he was living in Norway with his brother, the sculptor Antoine Pevsner. Following the Russian Revolution the two brothers returned to their native Russia in April 1917, where they became involved with the Russian Constructivists. In contrast to the more political Vladimir Tatlin, both brothers remained devoted to the art work as in independent aesthetic object. In their Realistic Manifesto, which they pasted around the streets of Moscow in 1920, they stated that “the realisation of our perception of the world in the form of space and time is the only aim of our pictorial and plastic art”.

Around 1922 Gabo left Russian and lived successively in Berlin, Paris and England. Gabo was universally regarded as an important innovator in sculpture and enjoyed a successful international career. In 1946 he immigrated to the United States, where he lived until his death in 1977.