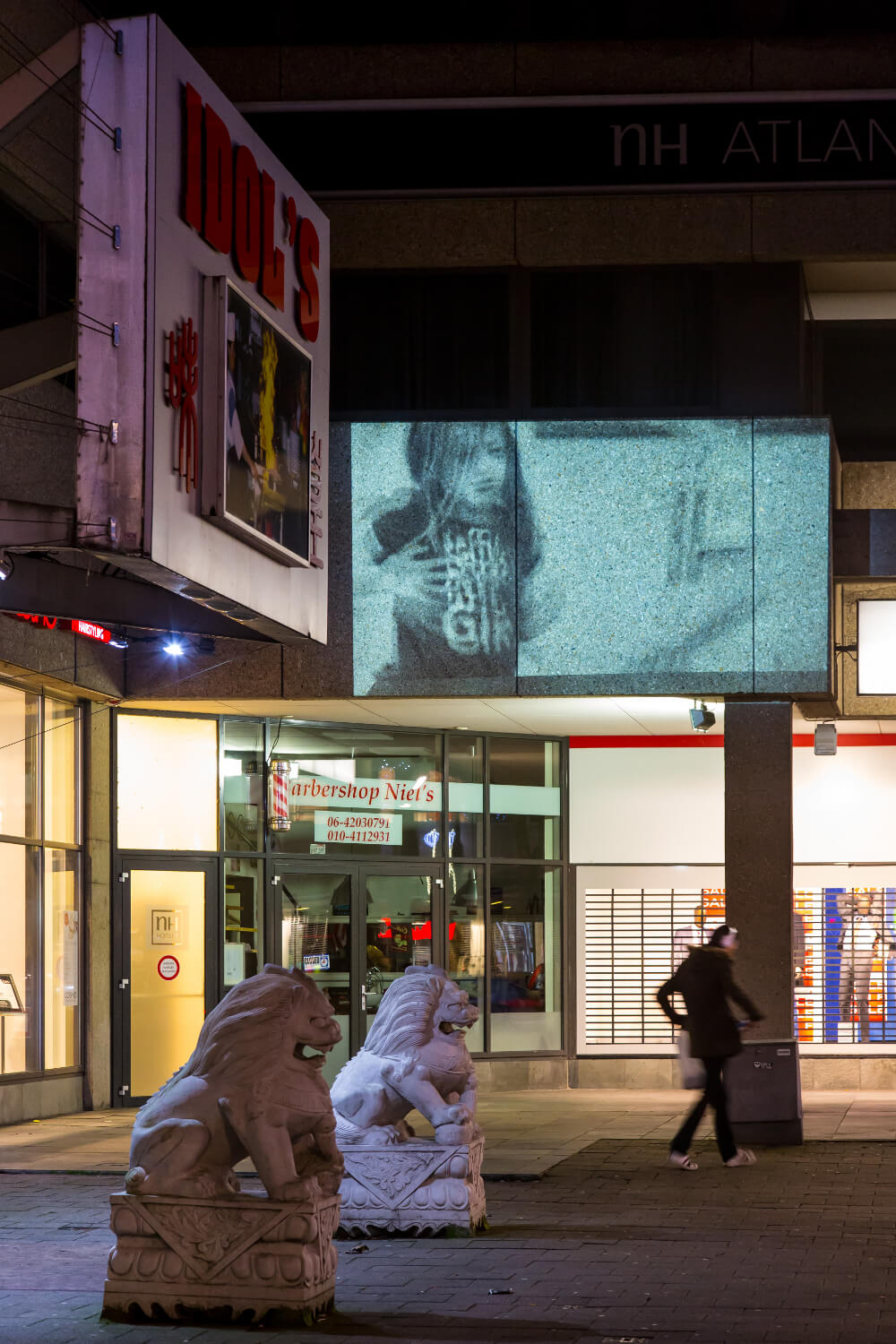 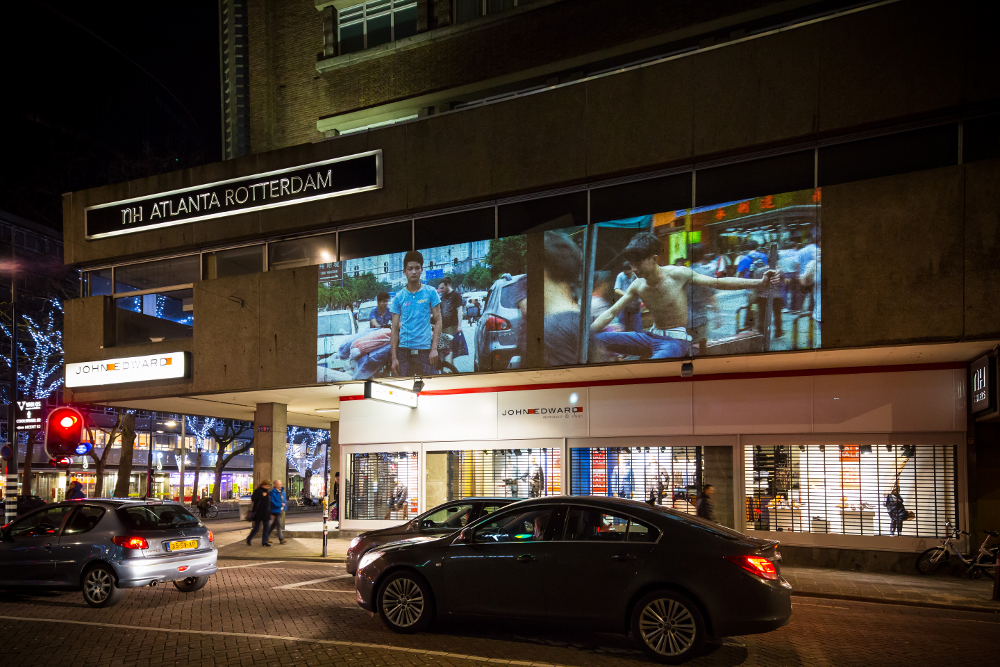 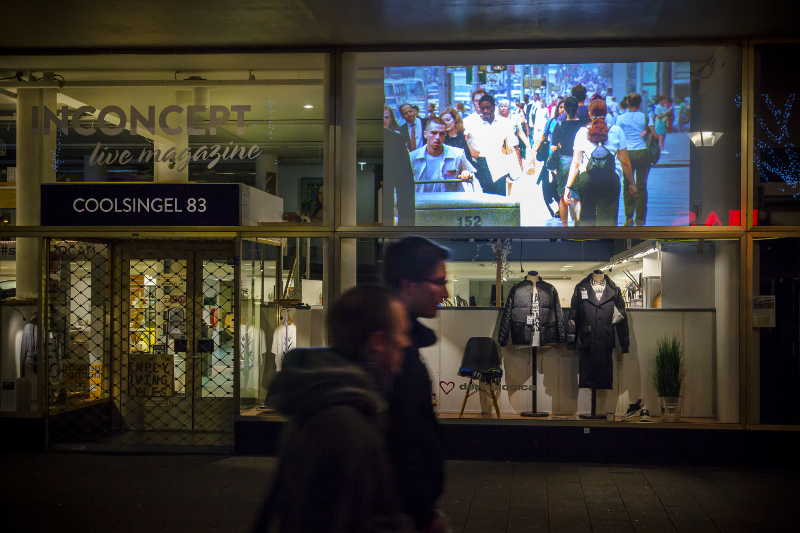 Tribute to an Avenue 2015. Artists’ Films in Dialogue with the Coolsingel

Sculpture International Rotterdam (SIR) again declares its love for the Coolsingel in Rotterdam with the exhibition Tribute to an Avenue. Once more, SIR transforms the famous Rotterdam avenue in to a modest outdoor cinema. Between 16 January and 8 February 2015, a walk through the dark streets will be lit up, as short films by famous artists will be presented on the facades and in the windows of the Coolsingel. In this temporary outdoor exhibition, SIR explores other possible realities for the Coolsingel.

From dusk until dawn, a total of nine short films will be screened on the Coolsingel. Sometimes their presentation is conspicuous, grabbing the attention of the casual passer by. Sometimes they are concealed and the curiosity needed to discover them opens up different ways of seeing the Coolsingel.

Locations and films
The locations have been selected to articulate a distinct dialogue between the films and the boulevard. Kings of the Hill by the Israeli artist Yael Bartana portrays growling four wheel drives; although the film was made on the dune laden outskirts of Tel Aviv, the traffic and machismo depicted have a direct association with the Coolsingel. No Man is an Island by the Danish artist Jesper Just shows a middle-aged man dancing ballet-like around a square in Copenhagen, while nearby a young man is crying and children join in the dancing. Where better to show this film than the intimate square by the puppet theatre. A scene showing Andy Warhol eating a hamburger from Jorgen Leth’s film is screened on the Coolsingel, surrounded by no less than three McDonalds.

The films are shown in the Coolsingel’s somewhat worn public space’s. As varied as the films are, they raise questions about the location of their presentation: what or who makes the Coolsingel what it is, and what role does the public play in this? Everyday for three weeks, visitors can view the artworks at their leisure from dusk until dawn. In addition to the films, the route also includes the permanent masterpieces of the SIR Collection, including: Cascade (Joep van Lieshout), the Naum Gabo, the Willem de Kooning ensemble, and It’s Never Too Late To Say Sorry (Elmgreen and Dragset).
Tribute to an Avenue
Dates: 16 January – 8 February 2015
Time: Daily, from sunset to sunrise
Location: Coolsingel, from Hofplein to Churchillplein, Rotterdam
Admission: free
www.eerbetoonaaneenavenue.nl

Opening of Tribute to an Avenue
Friday, January 16, 2015, 17:45 pm
By the projection of Javier Téllez, the Rotterdam artist Gyz La Rivière and the Alderman for Finance, Inner Cities, Culture and Sport, Adriaan Visser, will open the exhibition. The opening will be followed by the CBK Rotterdam’s New Year reception at Coolsingel 83 (InConcept).

Friday Night Film Tour
Friday 23 and 30 January and 6 February 2015 from 17:30
See, discuss, and enquire about the films with a guide from Tribute to an Avenue, and enjoy a mulled wine at the end of the tour.
Meeting and end point: InConcept, Coolsingel 83.
Book via office@sculptureinternationalrotterdam.nl

Sunday Tour: The Coolsingel as Monument
Sunday 18 and 25 January and 1 and 8 February. Start: 14:00
A tour of the SIR Collection’s masterpieces as well as the special architecture and hundreds of ornaments on the Coolsingel.
Meeting and end point: InConcept, Coolsingel 83.
Book via office@sculptureinternationalrotterdam.nl

Film and Book: It’s Never Too Late to Say Sorry
Monday 26 January
Marieke van der Lippe was commissioned by SIR to make a film made about the artwork It’s Never Too Late To Say Sorry by Elmgreen and Dragset, which is on the Coolsingel and part of the SIR collection. The film will premiere on Monday 26 January 2015 as an official selection of the International Film Festival Rotterdam.
A book about the same work will also be launched: 366 rapporten van een performer (366 Reports of a Performer), written by Wim Konings and designed by Simon Davies. An event with film, a reading from the book, and interviews with some of the people involved.
Monday 26 January, tickets via www.iffr.nl

Final Party Tour with SIR’s Wijsje
Saturday 7 February at 19:30
Using the video works of Tribute to an Avenue as a thread, the Wijsje organisation explores and discovers the Coolsingel, with bands performing acoustic concerts in its unusual settings.
Tickets: www.wijsje.com

With thanks to the Mondriaan Foundation and the City of Rotterdam, Tribute to an Avenue is initiated and curated by Sculpture International Rotterdam, in collaboration with many entrepreneurs, Bureau Binnenstad, and Stadsontwikkeling. SIR manages and develops Rotterdam’s international sculpture collection and is a program of the Centre for Visual Arts Rotterdam.