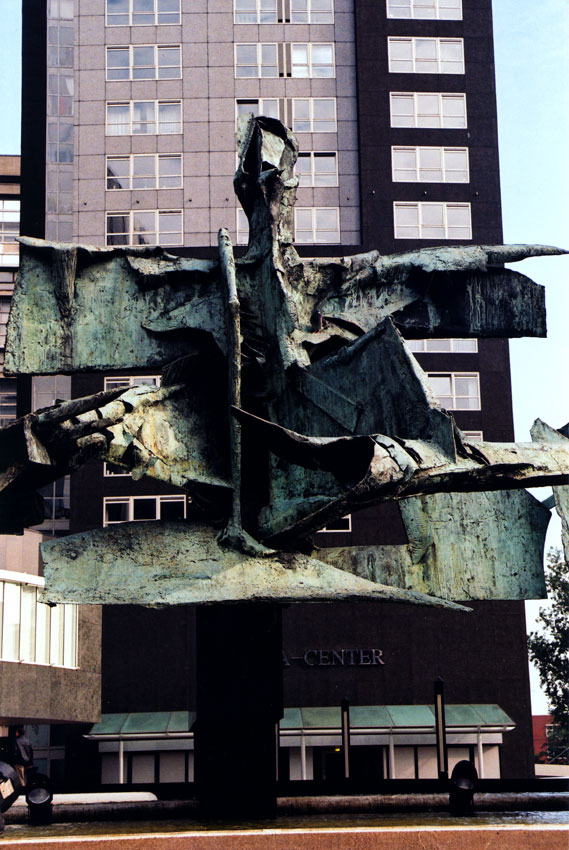 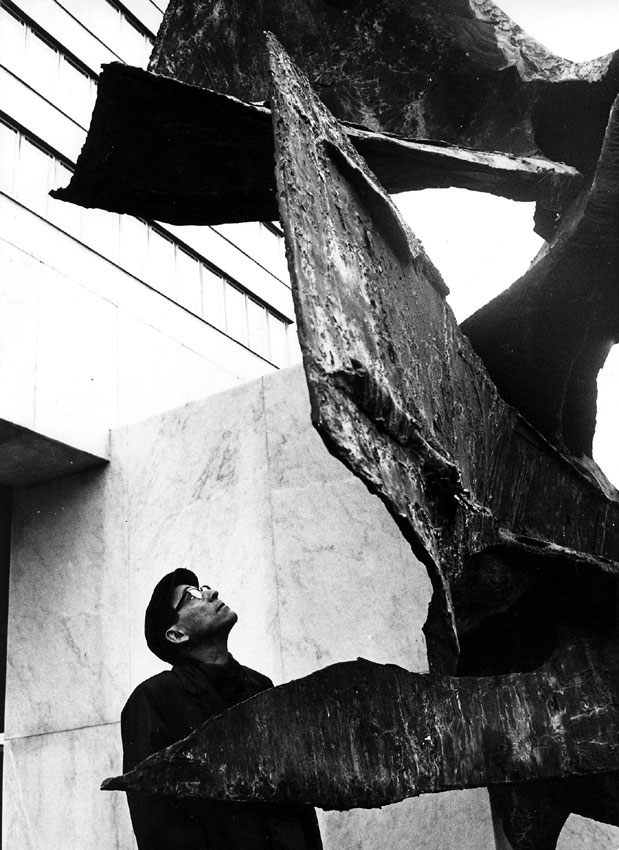 Upon its completion in 1963 Corporate Entity by Wessel Couzijn was the largest bronze sculpture cast in the Netherlands. Unilever commissioned the sculpture for its new office building on the Burgemeester s’ Jacobplein.

Wishing to introduce a contrasting element to its geometric building Unilever asked Couzijn to design a dynamic freestanding monumental sculpture. Neither the architect nor the client gave Couzijn a brief, so that he was able to work in complete artistic freedom.

Couzijn chose for a sculpture with a strong horizontal stress to contrast with the verticality of the building. The sculpture was to be placed in a pond so that it was reflected in the water. Couzijn wanted to sculpture to be placed loose in the water but the client was afraid of damage in windy weather. It was decided to attach the 20,000 kilo bronze colossus to the wall between the entrance and the pond.

Corporate Entity is built up of three main segments placed alongside one another, overlapping at several points. The main forms are whimsical elements that fan out in all directions suggesting a fragmented whole. The overlaps strengthen the cohesion and the expressive character of the main figures and the colour contributes to the sculpture’s dramatic power. Couzijn asked the foundry to use a special bronze alloy with 96% copper so that the surface would quickly develop a green patina.

There has been much speculation about the sculpture’s title, which has been said to imply an ‘embodiment of the unity within a large corporation’ and ‘a criticism of the power of multinationals’. 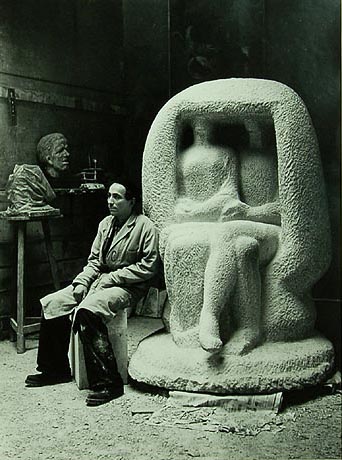 Wessel Couzijn was born in Amsterdam in 1912. From the age of three he lived in New York, where he received his first drawing lessons at the Art Students League. He returned to the Netherlands in 1929. In the following year he began to study painting at the Rijksakademie in Amsterdam, where his teachers included Jan Bronner, a respected but traditional sculptor. Couzijn re-enrolled in the sculpture department. In 1936 he won the Prix de Rome, allowing him to travel to Italy. Around 1939 he stayed briefly in Paris, where he met the sculptor Aristide Maillol and acquainted himself with the work of Auguste Rodin.

His Jewish background forced him to flee Europe in 1940. He spent the war years in New York and met many other exiled European artists including Ossip Zadkine and Jacques Lipchitz. He also met the sculptress Pearl Perlmutter, with whom

he married. After the war he returned to the Netherlands and developed a powerful expressionist style. His works immediately after the war were figurative, but gradually developed into abstract expressions of hope, despair, love, liberation and oppression, partly inspired by a visit to Auschwitz. His works became more open in form, the expression amplified by a sense of space and dynamism.

Couzijn lived and worked in Amsterdam until 1970, and thereafter in Amstelveen. He produced an impressive and highly respected oeuvre and won numerous prizes including the David Röell Prize in 1966 for his entire oeuvre and the Dutch State Prize for Sculpture in 1967. His work was exhibited at the Venice Biennale and is included in numerous public and private collections. Couzijn died in Haarlem in 1984 at the age of seventy-one.