Portrait of a R… 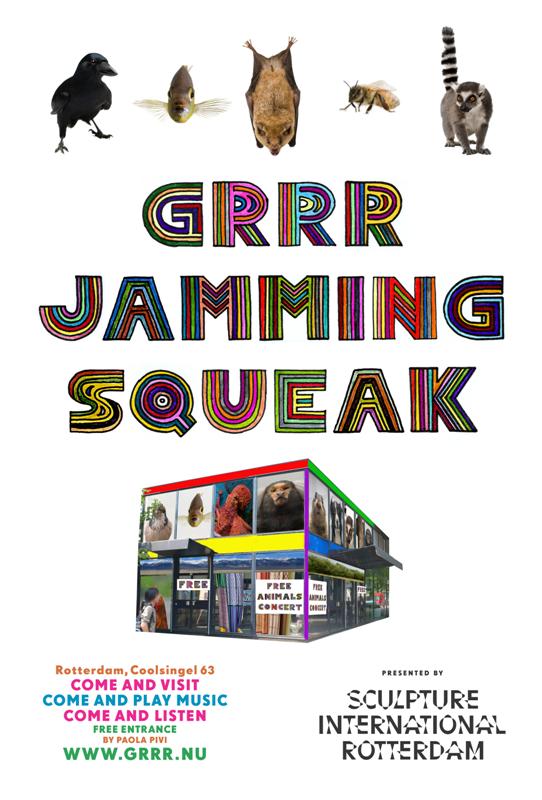 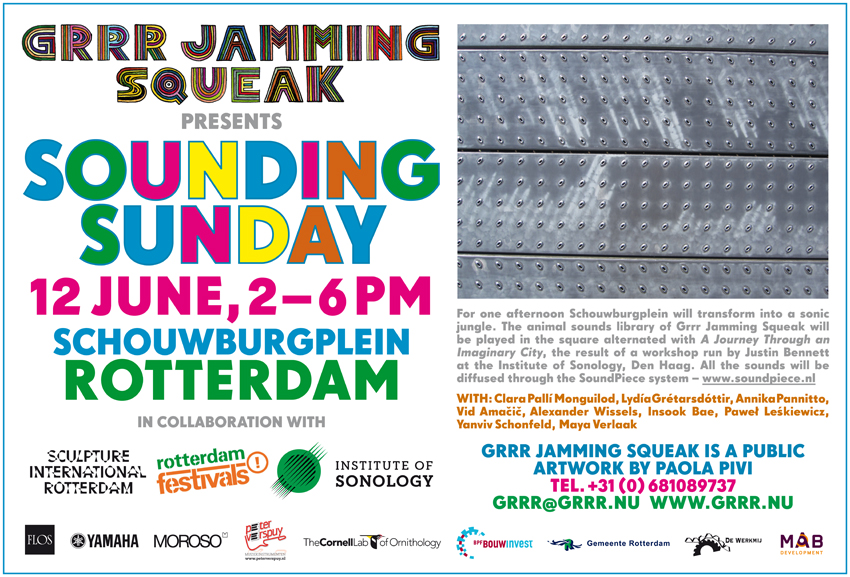 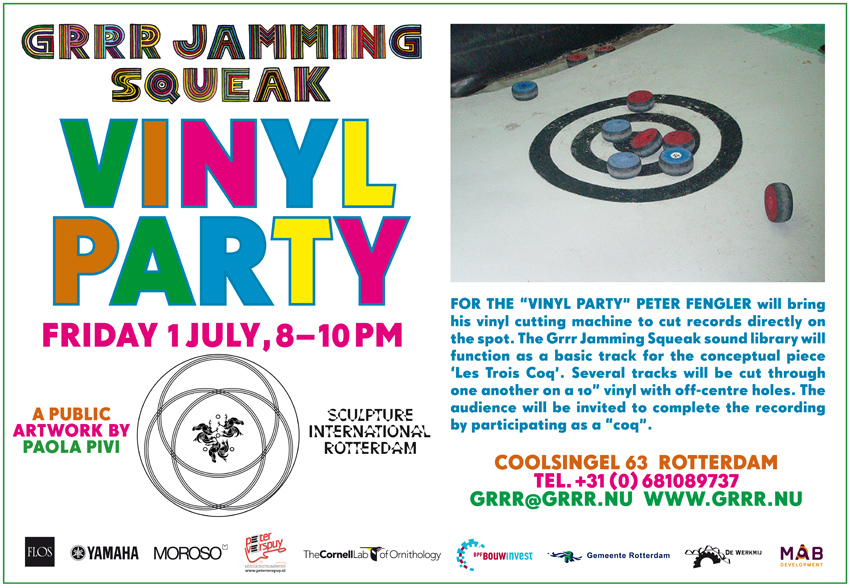 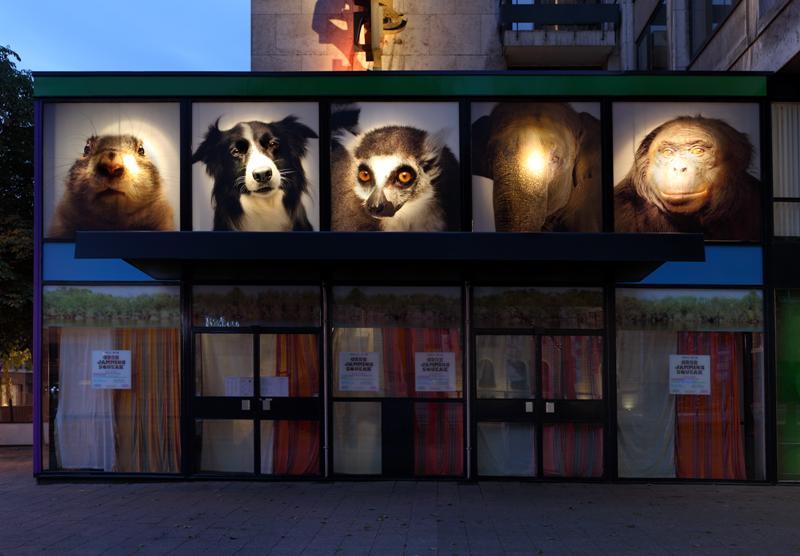 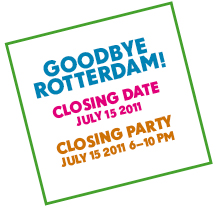 GRRR JAMMING SQUEAK is a public artwork by the Italian artist Paola Pivi (1971, Milan) created for the city of Rotterdam. Located from April 2010 to June 2011 at the Coolsingel—the city’s heart and most important street—GRRR JAMMING SQUEAK is a fully functional music recording studio, attended by sound engineers, available to everyone, for free, to play music along with the sounds of animals.

This work by Pivi is not only a joyous and generous gift to the city, its inhabitants and its visitors; it is also an engaging, publicly operating machine that redefines the idea of public art. GRRR JAMMING SQUEAK is housed in a two-storey building with a glass façade to the street. The studio is technically advanced, managed by sound engineers and equipped with a complete set of instruments—from a saxophone and a synthesizer to a drum set, and so forth. The large and double soundproof room accommodates groups and individuals; professional musicians as well as amateurs. There is one single rule that each studio-user must obey: to play along with the recorded sounds of animals.

A wide collection of recordings (made available by the Macaulay Library at The Cornell Lab of Ornithology in Ithaca, NY) offers visitors the animal sound of their choice, whether it be a squeak of a mouse; a humming bee; the roar of a tiger or a bear—to name a few of your options. Visitors are invited to play, compose, improvise and jam; to record, mix and master the music. The music belongs to the person who played and recorded it and not to the studio. The studio is free of charge. You can learn or teach to play an instrument, or simply listen to others playing along with the sound of animals. GRRR JAMMING SQUEAK will furthermore showcase a selection of animal photo portraits by Vincent J. Musi, author of Animal Minds (National Geographic, 2008).

GRRR JAMMING SQUEAK studio offers a wide range of ongoing activities: On a monthly basis, GRRR JAMMING SQUEAK will turn itself inside-out, offering a free concert to the public featuring renowned musicians of every imaginable music genre. On these occasions, loudspeakers will be installed on the street, ‘calling out’ for the pedestrians of the Coolsingel and Stadhuisplein. The first concert of this series, on the opening day, is by Spinvis, the renowned Dutch musician. On a weekly basis, the studio will organize free events inside the studio (concerts; lectures; workshops, etc.), invite Rotterdam groups (such as a club or a school class) to perform as a band, broadcast a radio show with the most remarkable sound recordings of the previous week. Additionally, GRRR JAMMING SQUEAK activities will be kept in our collective sound memory, through its permanent and growing archive of recorded sounds; in a monthly radio show about the studio’s various activities, hosted by web art radio RAM (www.radioartemobile.it), and on an annual compilation album Best of Grrr, containing the most remarkable studio recordings of the year. GRRR JAMMING SQUEAK may also be experienced on a daily basis, with news updates on www.grrr.nu.

CONTEXT: LONG-TERM PLAN FOR COOLSINGEL AXIS
GRR JAMMING SQUEAK is part of SIR’s long-term plan for the Coolsingel axis (2009-2012). In preparation of the major redevelopments of this urban boulevard, SIR offers a program of temporary and permanent art projects, focusing on the past, present, and—above all—unpredictable future of the Coolsingel. Various possibilities are examined for a new generation of art works for Rotterdam’s most important street. Within this framework, SIR opened the SIR Cinema in November 2009 and Taneda’s Coolsingel Cube in January 2010, during the IFFR. 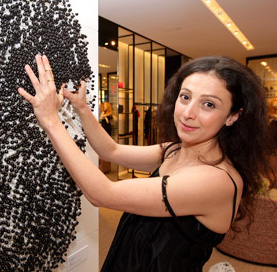 Paola Pivi (1971, Milan) has lived and worked in unusual places around the world, such as small islands, deserts and faraway countries. Currently she is based in Anchorage, Alaska. With her sculptures, installations and performances Pivi builds a personal universe ruled by the laws of irony and absurdity. Pivi´s works originate from colossal operations yet appear light, spontaneous and agile, like the movements of an athlete. Through changes of scale, duplications of objects or alterations of context, Pivi transforms impossible actions into simple and disarming gestures. Among other feats, she has photographed alligators covered in whipped cream, and brought together dozens of white animals to construct a monochrome zoo in an exhibition space.

Her work, much like its cheerful and strange titles (‘If you like it, thank you. If you don’t like it, I am sorry. Enjoy anyway’, ‘My religion is kindness, thank you. See you in the future’, ‘One cup of cappuccino then I go’; as well as the title of this new work) is an open invitation to the public, to interact and play.