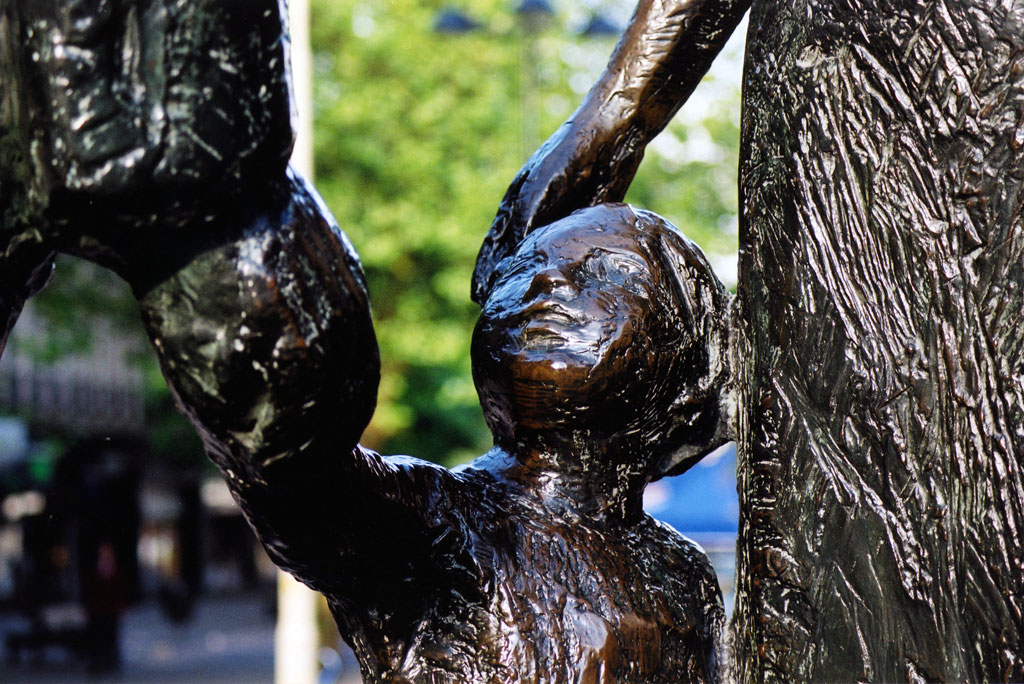 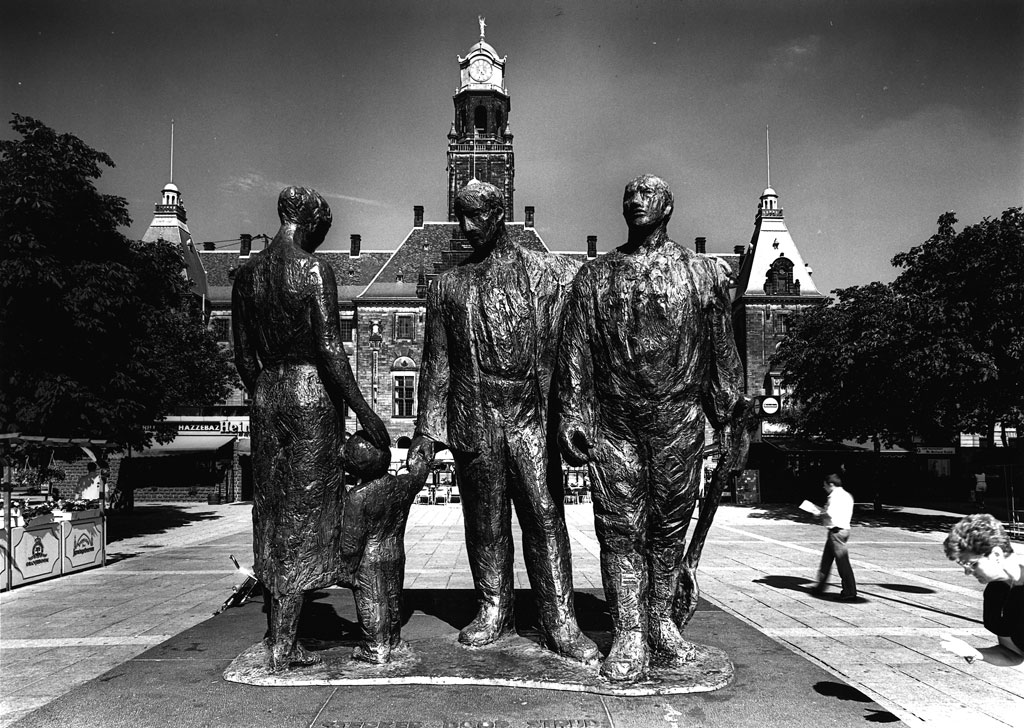 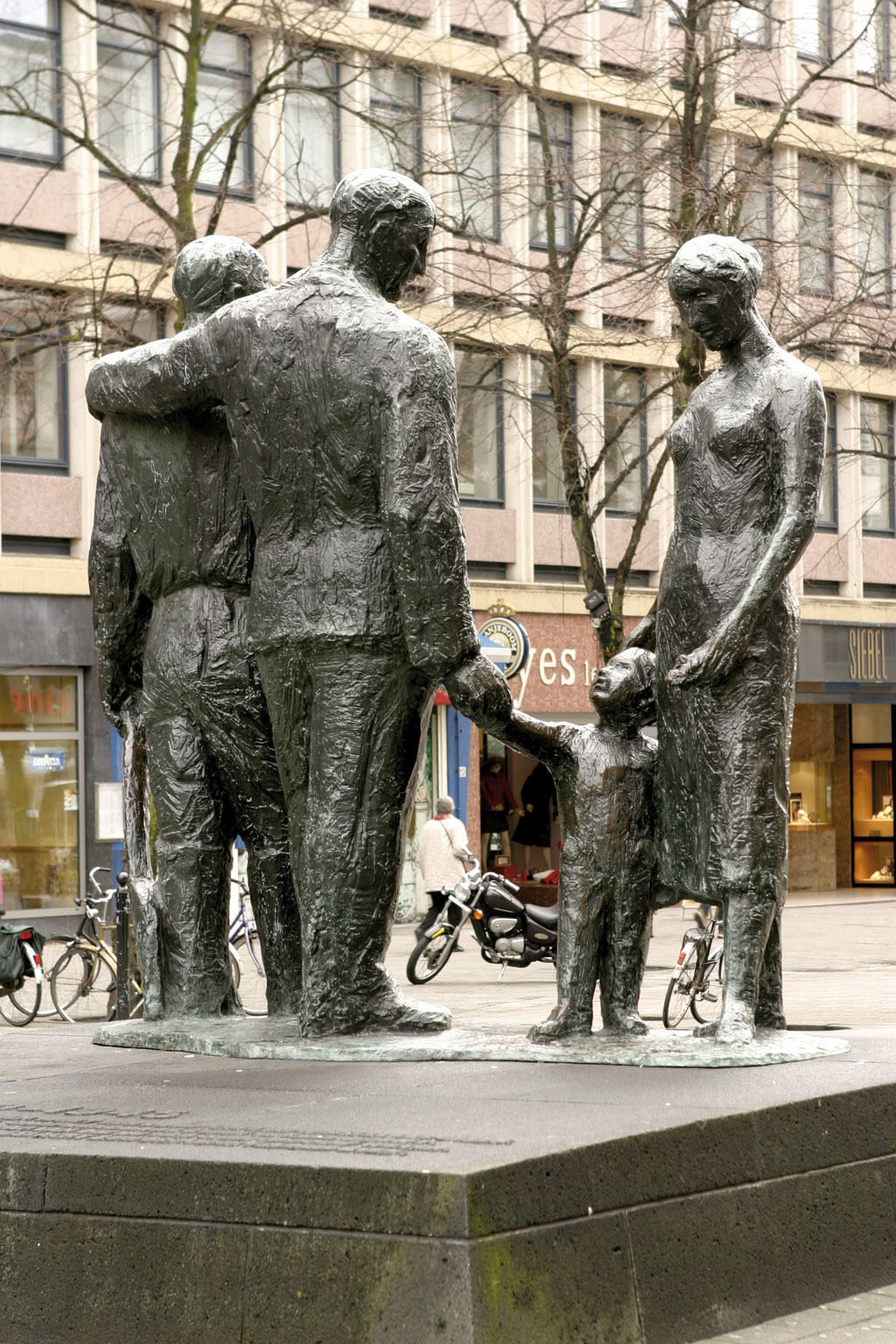 Mari Andriessen’s Memorial to the Fallen 1940-1945 – four bronze figures – from 1957 commemorates the victims of the Second World War.
Two men, a woman and a child meet one another on a large plinth. They symbolise various aspects of the post-war years. The woman’s bowed head represents the grief for the past; the man with the shovel represents the optimism of post-war reconstruction. The other man and the child form the link between these two extremes. The sculpture has a strategic location between the old City Hall and the modern buildings of the Lijnbaan.

The plinth bears the inscription: ‘Stronger through struggle’. Wilhelmina spoke these words upon her return from England, and they form the motto in Rotterdam’s coat of arms. On the other side is a poem that Clara Eggink wrote to accompany the sculpture: ‘The work before us demands strength. We must put the disaster behind us and rebuild. As inevitable as the flocks of seagulls to your harbours, the will to live returns. Your prosperity is built upon the untimely graves of those who cannot rebuild. Remember those who have perished and your future generations will eat bread in freedom.’ 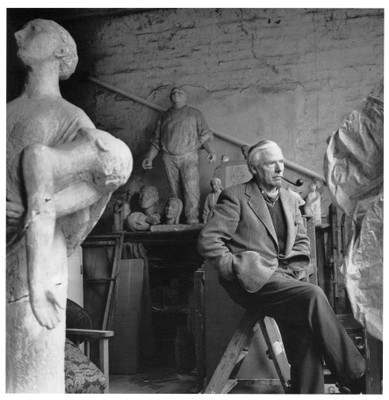 Mari Andriessen was born in Haarlem in 1897. He studied for several years at the Kunstnijverheidsschool in Haarlem and then studied sculpture at the Rijksakademie in Amsterdam, where he was taught by the sculptor Jan Bronner. His first monumental commissions came mainly from the Catholic Church: distillations of Bible scenes in stone. From the second half of the 1930s he also received commissions from non-Catholic sources. He moved from carving to modelling and his work became freer and more spatial.

Andriessen made several war memorials following the Second World War. The first of these was for a memorial in Enschede in 1949. He designed various figures; a soldier, a Jewish woman and child, bomb victims and resistance fighters, and placed them on individual plinths on a lawn. In the same period Andriessen was approached by the City of Amsterdam to design a memorial to the Strike of February 1941. For this sculpture Andriessen chose the strident figure of a robust and militant dockworker. Since its unveiling by Queen Juliana on 19 December 1952 the sculpture has been widely regarded as a national symbol of the Resistance in the Netherlands.

In 1962 Andriessen was commissioned to design a national monument to Queen Wilhelmina in The Hague. He also made sculptures of the engineer Lely at the Afsluitdijk and of Anne Frank, which has been displayed in Amsterdam since 1977. Andriessen was admired for the manner in which he expressed his subjects; characters without excessive detail. He remained active until an advanced age. He died in Haarlem in 1979.