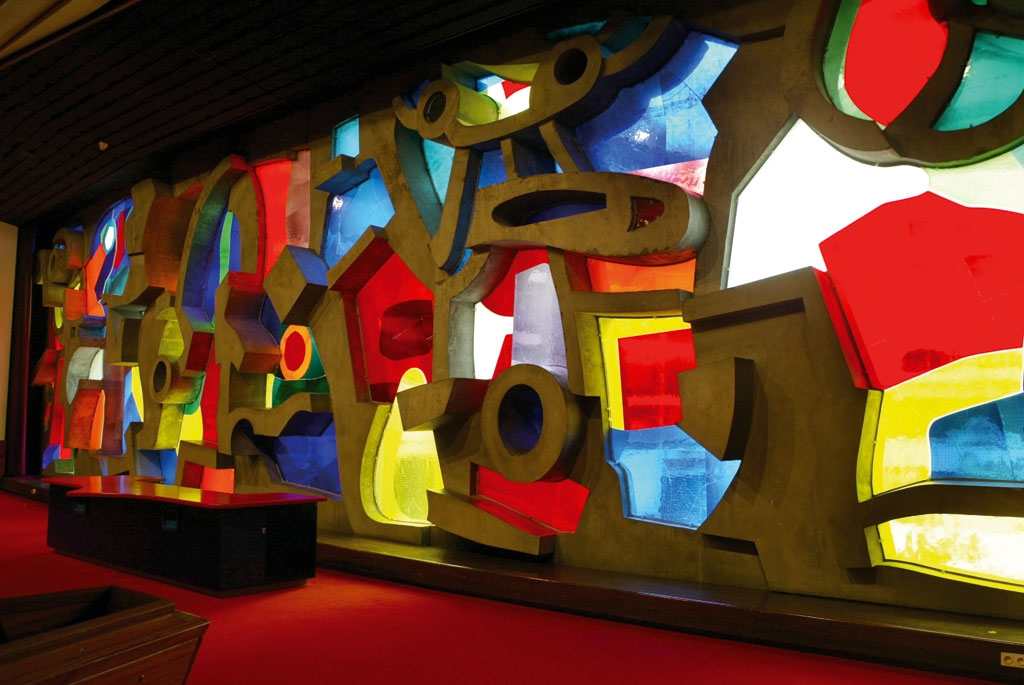 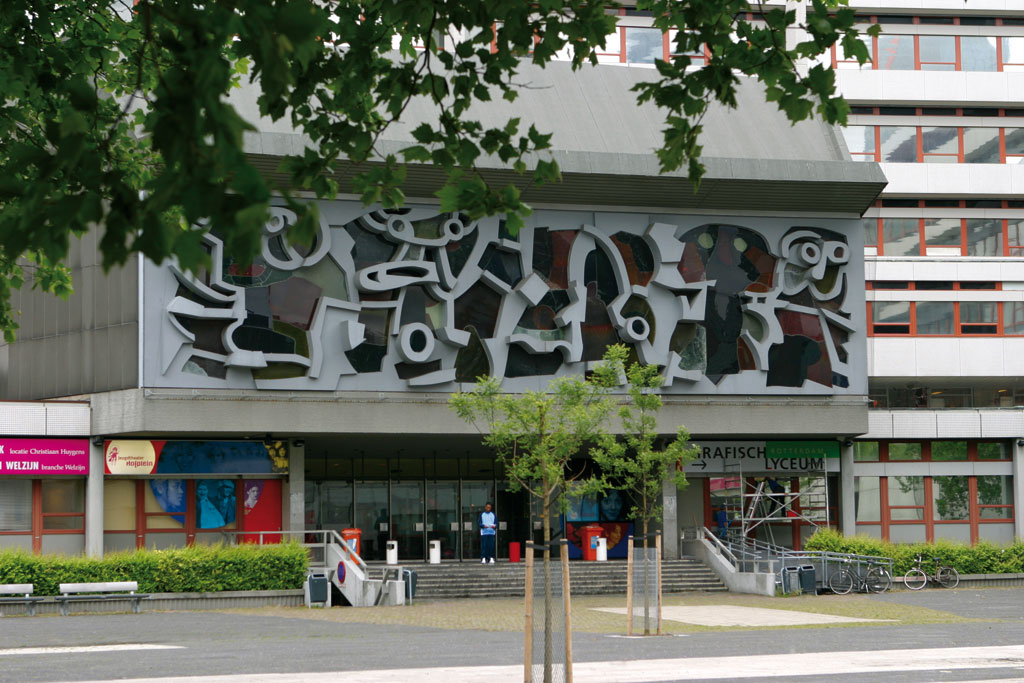 Karel Appel’s untitled glass and concrete frieze is sited above the entrance to the Hofpleintheater. The informal work stands in stark contrast to the impersonal architectural style of the large academic complex – the Technikon – of which the Hofpleintheater is a part. Appel’s forms are playful and whimsical and his colours bright and contrasting.

The work’s form and content correspond to Appel’s paintings of the period. The elongated plane is divided by the playful lines of the concrete relief. The composition appears abstract and organic, but figures are suggested by bulging eyes and mouths. The contours of the concrete relief are filled with sheets of coloured glass. The use of colour also corresponds with Appel’s paintings of the period. He had left behind his 1950s style with its emphasis on the material nature of the paint and had developed a new working method in which he juxtaposed smooth and even patches of colour, thus emphasising the intensity of the colours.

From the outside it is the concrete play of lines that attracts one’s attention, inside one is overwhelmed by the illuminated coloured glass. 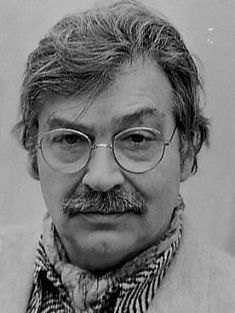 Karel Appel was born in 1921 in the Dapperstraat in Amsterdam. He wanted to be an artist from the age of fifteen. He studied painting at the Rijksakademie van Beeldende Kunsten in Amsterdam from 1942 to 1944. His first works after the war were experimental yet still inspired by the modern classics. A visit to Paris in 1947 brought a radical change in his work: Appel was influenced by Jean Dubuffet, primitive art and Surrealism. He believed that art should liberate the human spirit.

In 1948 he co-founded the international artists’ group CoBrA together with Constant, Corneille, Asger Jorn and others. Its members preached that creativity was not the sole privilege of professional artists but could also be found among children and folk artists. Within CoBrA Appel developed an expressive form of painting based on primitive art and children’s drawings. He employed figurative elements but exercised total freedom in his formal language. His sculptures from this period consisted of assemblages.

Around 1965, Appel’s three-dimensional work consisted of painted wooden reliefs and freestanding sculptures. In the 1970s he sculpted animals, figures and heads from stainless steel and glazed ceramics. In the mid-1980s he produced three-dimensional works from wood and rope incorporating Polaroid photographs. From 1989 he made sculptures from objects from various cultures.

Appel was commissioned to produce monumental public works in a variety of media. The best known of these are his wall paintings in the Stedelijk Museum in Amsterdam and in the UNESCO building in Paris and the ceramic wall tiles in the World Forum (Congresgebouw) in The Hague. Appel’s international breakthrough came in the 1950s. Initially his work was poorly received in the Netherlands and in 1950 he decided to leave his native country. He lived in Paris until 1965 and then in Auxerre until 1972. Thereafter he split his time between New York, Tuscany and other homes. Karel Appel died in Zurich on 3 May 2006.

Even Appel’s interest in monumental commissions, which increased as his reputation grew after the mid-1950s, can be partly explained out of his need for spatial expansion and for stretching the boundaries of expression. In one of his earliest monumental works, the 1949 painting of the foyer to the Stedelijk Museum, Amsterdam, his urge to conquer space with his paintbrush is already in evidence. The childlike fantasy figures and animals burst the parameters of the wall, happily making the most of the ceiling and doors as well.

Between 1950 and 1972, Appel produced seven monumental works in Rotterdam, four of which were permanent and three temporary. At first it was chiefly Jaap Bakema – the architect of large-scale building projects and manifestations who gave visual expression to post-war Rotterdam’s dynamic verve – who involved Appel in his projects. Bakema challenged Appel to express his urge for the monolithic in giant three-dimensional constructions as well as paintings. The most imaginative of these are undoubtedly Life Tree, a 20-metre high, prickly assemblage of painted Triplex sheeting to mark the Rotterdam Ahoy’ exhibition (1950) and Wall of Energy (1955), a 100-metre wide wall painting done for the E’55 exhibition. The last commission from Bakema was for a 40-metre long relief for the 1960 Floriade agricultural show, and like the other two pieces was of a temporary nature. Appel’s more permanent works were tapestries for the Levensverzekeringsmaatschappij Utrecht (an insurance company) in 1961 and for Europoint in 1972, as well as a ceramic tile frieze for Rotterdam’s Polytechnic School of Economics (1966/1967) and a design for a stained-glass-in-concrete relief for the entrance to the city’s Hofplein Theatre.
The relief fits in with the series of earlier Rotterdam projects. Due to its size – 6 x 24 metres – and pronounced plasticity it provides a striking accent in the 220-metre wide wall of the theatre, which is part of the Technikon, a large-scale school complex designed by the Rotterdam architectural studio of Maaskant, Van Dommelen, Kroos and Senf. The complex, comprising three separate but linked buildings in a U-shape, was built between 1961 and 1970. The building’s budget included a sum for a work of art as part of the Percent for Art scheme. In view of the fact that building costs were high, so was the money available for art. Those involved agreed that this should be spent on one evocative work. After considering various locations for a free-standing sculpture it was finally decided to have a mainly two-dimensional work above the entrance to the Hofplein Theatre on the inner courtyard of the complex. On architect Hugh Maaskant’s recommendation – who had kept in touch with Appel since the early 1950s –- Rotterdam council held initial talks with the artist in 1963 and 1964. Appel’s first design for a stained-glass wall was received with enthusiasm. However, its execution was technically highly complicated and thus not financially viable. In the summer of 1964 Appel presented a modified design in the form of a model which resolved the technical difficulties by incorporating the stained glass into a concrete skeleton. The skeleton was made on site by the concrete being poured into a two-part wooden mould. Two cranes were then needed to hoist both parts, which together weighed 60 tons, into place and link them together. The sheets of coloured glass were then applied and in May 1970, six years after the design was first mooted, the relief was unveiled by Queen Juliana.

The glass-in-concrete relief reflects in a non-emphatic, yet inventive manner Appel’s tendency to draw three-dimensional and two-dimensional visual elements together in one work. The erratic divided framework composes the flat surface and helps to build up the picture while the concrete elements, that recede and protrude by turn, give the wall an almost sculptural quality. Within the concrete framework Appel has used contrasting, vividly coloured glass to elaborate on the various visual elements. Four or five immense, primitively depicted human or animal forms – sometimes only suggested by large round eyes – loom out of an ostensibly abstract composition. Together these figures, somersaulting through each other, form a burlesque festive procession that appears to continue to the right and left beyond the framework.

Formally and thematically the relief is clearly linked to similar work by Appel from the mid-1960s. The combination of two- and three-dimensional elements is comparable to the painted multiplex reliefs he made in his French studio, while the shapes and colours tie in with his paintings and graphic work from that time. Obviously under the influence of Pop Art, Appel abandoned the dynamic thick impasto, the emphasis on materials and the often ominous atmosphere that distinguished his post-Cobra paintings for eminently flat compositions comprising large planes of colour and a bright palette. The expressive power of these motifs – for which glass is especially suited – is shown to maximum effect in the Rotterdam relief.

As well as reflecting Appel’s visual idiom from the Cobra period, the relief recalls a classical visual formula. Its extended size, the iconography of a group of interrelated figures and the placing above a doorway is a contemporary interpretation of a frieze from antiquity. However, this frieze – because of its subject matter and colourful ebullient aura – is more playful and festive than heroic or sacred. In this capacity it is absolutely in keeping with the present function of the site – a children’s theatre.