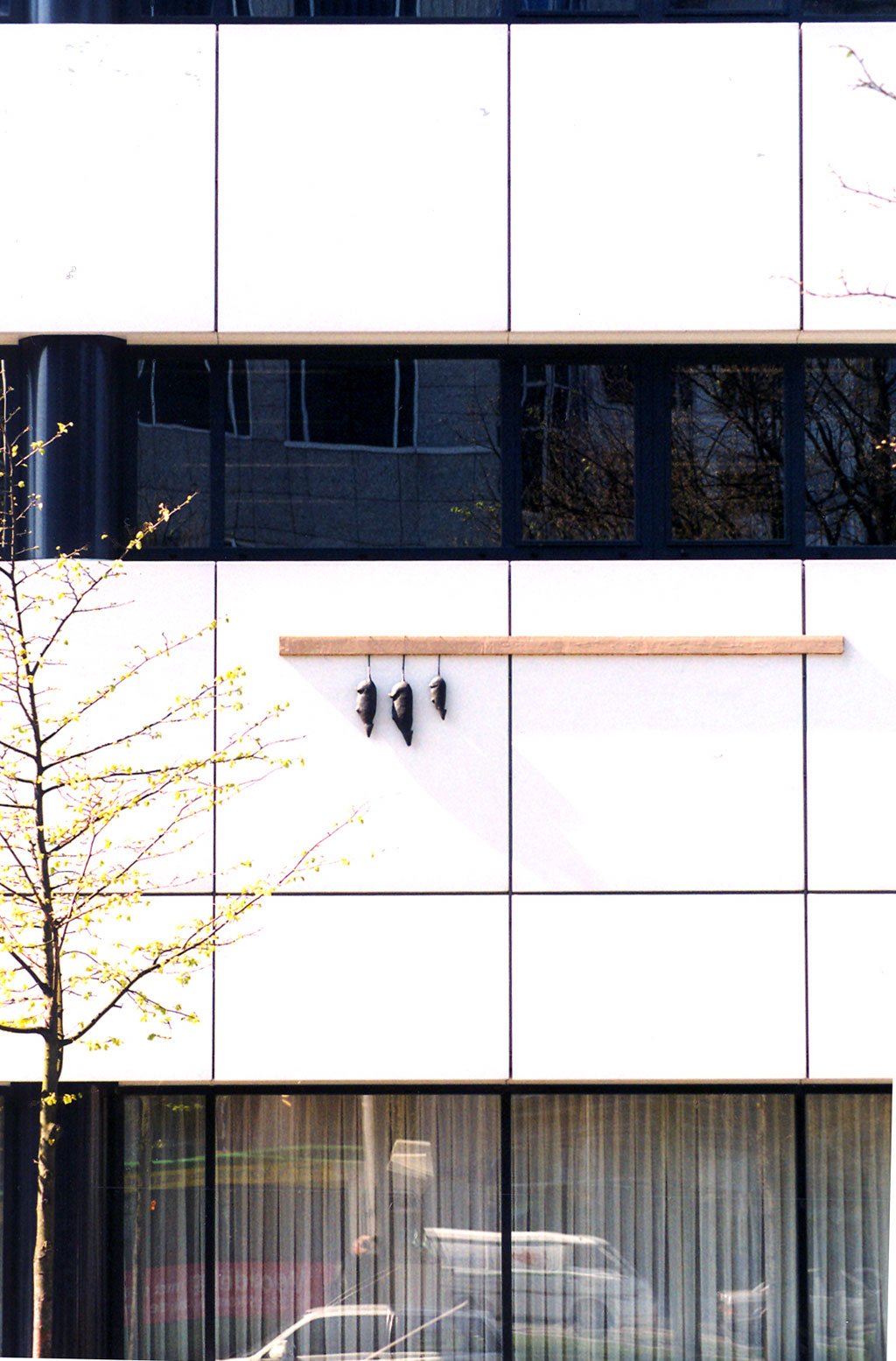 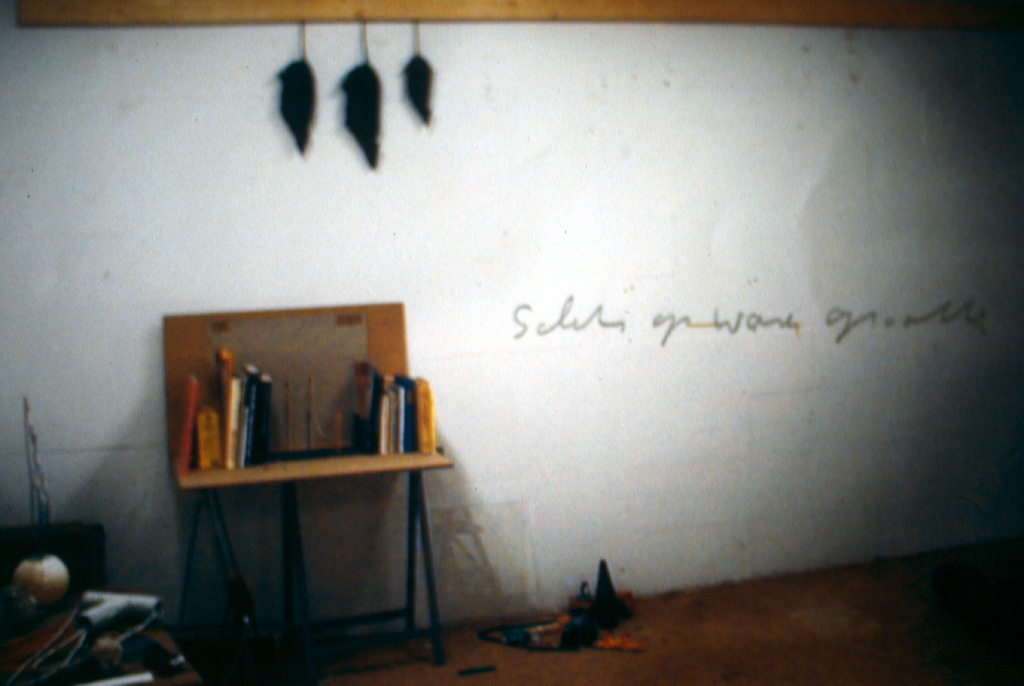 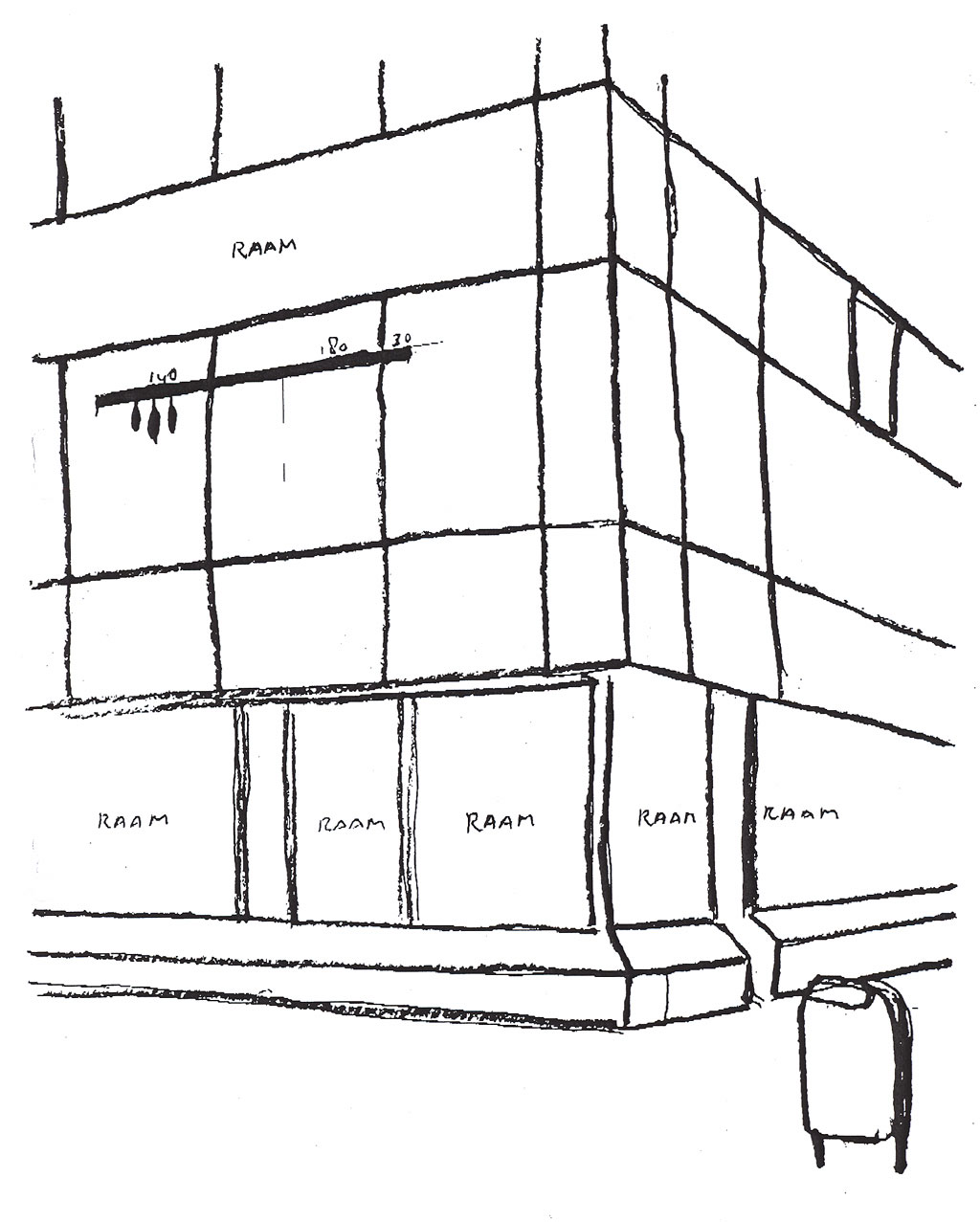 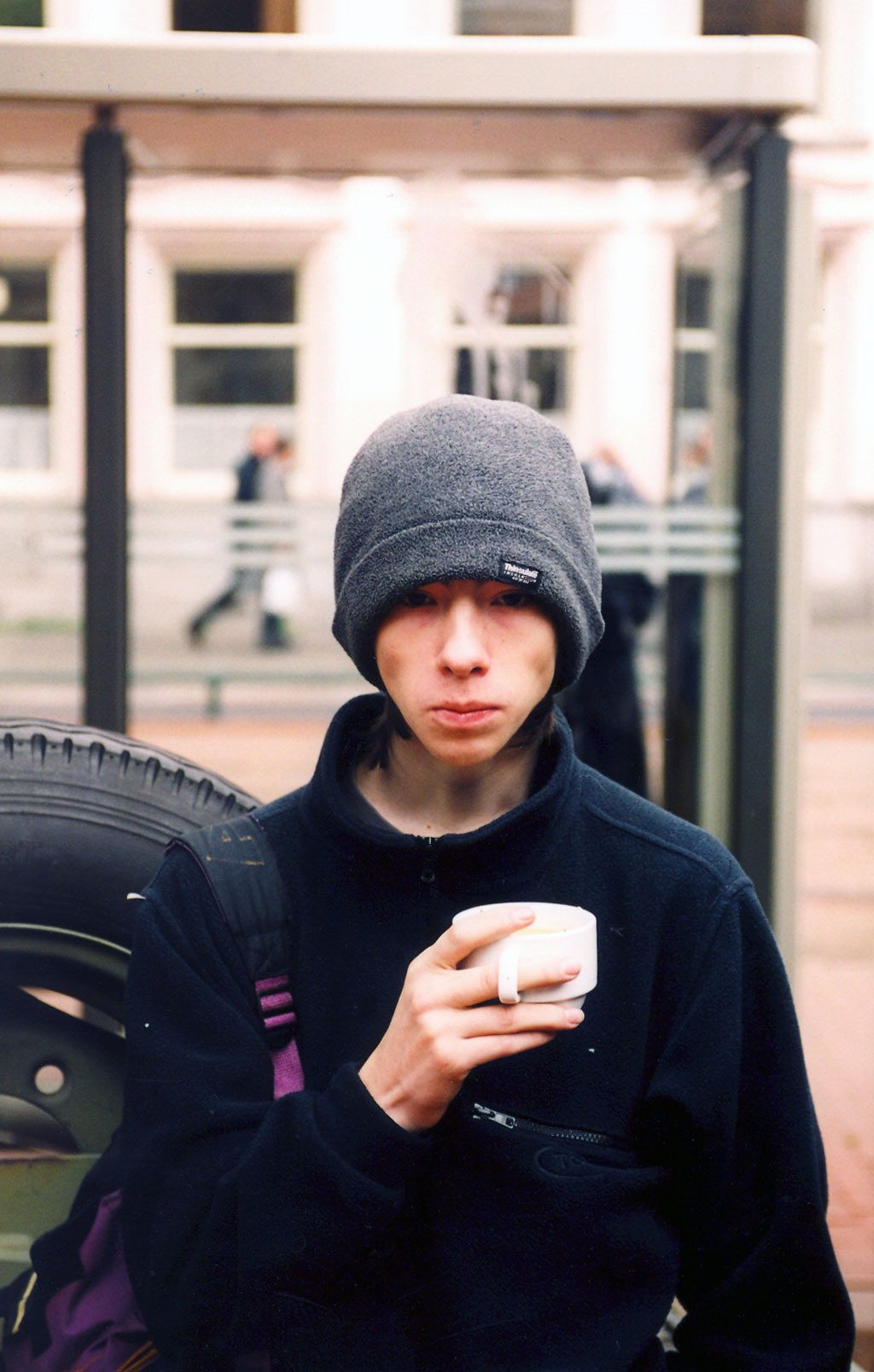 Three rodents hang with their tails clamped under a beam on the façade of the Weenapoint building on the Kruisplein at the height where you might expect to see a sign displaying the street name. Like the animals, the beam is made of bronze but has been painted to resemble wood. The sculpture is part of Manders’ larger project entitled Self-portrait as Building, which he initiated in 1986. During the week of the sculpture’s unveiling, Manders published a newspaper that was delivered door-to-door.

During the week of the sculpture’s unveiling, Manders published a newspaper that was delivered door-to-door. The newspaper contained poems and photographs of Manders’ temporary interventions in the public realm. It also contained portraits of a 15-year-old British boy, Angus Taggart, whom the artist had photographed because of his multicultural appearance. The newspaper gave an impression of the boy’s fantasy world and suggested that he was the author of the sculpture.

Angus functioned as a sort of alter ego for Manders. The artist Mark Manders, who exists only in an artificial world, is in turn an alter ego for the person Mark Manders. Manders’ work consists of materialised thoughts and events from this imaginary world.
(Source: openbarekunst.nl) 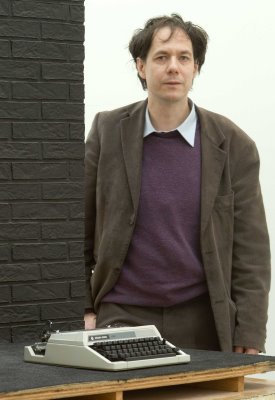 You might well pass by and not notice the art work Mark Manders designed for the sculpture route along Rotterdam’s cultural axis. The sculpture is modest and unobtrusive. Unlike the other sculptures along the Westersingel it is not on a plinth. It is not monumental, like Picasso’s sculpture that has been greeting passers-by for years now. Manders’s work, in the vicinity of the Picasso, has timidly nestled itself against the wall of the Weena Point building on Kruisplein. It is a sculpture that will always remain small-scale and unassuming.
In fact, if you are a stranger to Rotterdam, you have the greatest chance of noticing Manders’ art work. For then, perhaps with a plan of the city in hand, you are looking for street names and signposts. Weena Point, the first building on Kruisplein, is a logical spot to begin. Exactly at the height where you would expect to find a street name on the building – four metres or so above the pavement – you suddenly catch sight of a grim scene: three mice hanging against its light grey wall. The three creatures are jammed by their tails under a three-metre-long plank stuck horizontally to the wall. While the sculpture is of bronze and the mice more than lifesize, it does appear terrifyingly real. The plank is painted to resemble pine and beneath green blobs of glue can still be seen where the work was attached to the wall.

Manders deliberately chose not to make a large, physical work for the cultural axis. In his opinion, the chaotic area around Stationsplein and Kruisplein required a more subtle gesture. It was no mere accident that Manders selected a grey office building as a background to his work. The result is a sharp contrast between the giant, impersonal building and the almost impromptu, though confrontational intervention by the artist. It is almost like an act of rebellion – as if a yobbish teenager had come along and left his mark on the building. You can see the hanging mice as a form of three-dimensional graffiti.

The sculpture is the permanent part of a larger project. During the first week of November 2001, when the sculpture was unveiled, Manders also arranged for a few thousand newspapers to be delivered door-to-door throughout the city. In the newspaper, along with some poems, were chiefly photographs of Rotterdam’s public spaces. Photographs of the mice on Kruisplein were interspersed with those of the artist making temporary interventions in the city. The newspaper also printed various portraits of the 15-year-old British boy Angus Tagart – a model chosen by Manders because he is so evidently an adolescent and because his face reflects a mixture of cultures. Both the pictures and poems convey an enigmatic and yet depressing image of an adolescent’s mentality and lifestyle. Through the publication Manders is suggesting that the images in the newspaper, including the permanent art work on Westersingel, have been done by Angus, since the artist himself is only mentioned by name in the acknowledgements.

The fact that Manders has created a fictitious person – a kind of alter ego who takes responsibility for the artist’s actions – is typical of his style of working. In texts when he writes about his work, Manders often talks about himself in the third person. The artist Mark Manders differs from the person Mark Manders and, up to a certain point, is a fictitious character. Manders describes him as a neurotic, sensitive individual who can only exist in an artificial world. He lives in an imaginary building that can continuously expand or contract. The building acts as a kind of self-portrait – it is the space in which, and through which, the person Mark Manders is confronted with the thoughts of artist Mark Manders.

Since 1986, even before he began his training at Arnhem Academy of Art, Manders has worked on his life’s theme Self-Portrait as a Building. It is a metaphorical title for a separate universe – a building with numerous rooms which have all been furnished by the artist in his mind. This imaginary building acts as a gathering point for thoughts and concepts, as a framework that continuously produces new ideas. Manders regularly works on fragments from the building and exhibits them, utilising furniture, everyday objects or even reconstructions of entire rooms as well as people and animals living in the building. The works are generally highly surrealist in nature. A well-known example is the ceramic sculpture of a fox lying on the ground with a mouse tied to its stomach – an image Manders made during his academy period and which is now in the collection of the Museum of Contemporary Art in Ghent.
Manders sees his images as thoughts or events materialised. Often his reflections are inimitable and utterly his own. The artist appears to enter a dream world only he can completely understand and one which creates a bizarre impression on the viewer. He creates nocturnal landscapes from clay and sugar, or shapes Etruscan-like figures in clay. He invents strange appliances with secret functions and reproduces tables and chairs which are invariably just a fraction smaller than normal. Manders writes, takes pictures, makes films, models clay and composes. And although the individual works appear different at first glance, they are pieces of a puzzle that fit together within his Self-Portrait as a Building.

Until now, three of Manders’ sculptures have been produced as permanent art works for public spaces. The first one dates from twelve years ago when the artist added a scale model of his building to Nijmegen’s street scene. In 2001 one of his large sculptures was placed on Borneo island in Amsterdam, where two archaic-looking figures stand hand-in-hand looking at the water. The three mice on the wall of Weenapoint are the most recent inhabitants of Manders’s imaginary building to be made public. After years of wandering around the depths of his mind, they are now also allowed to see the light of day.