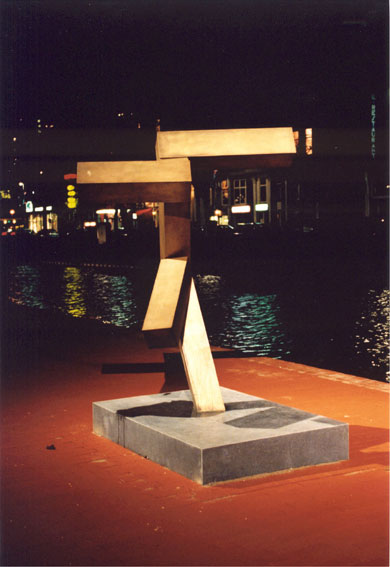 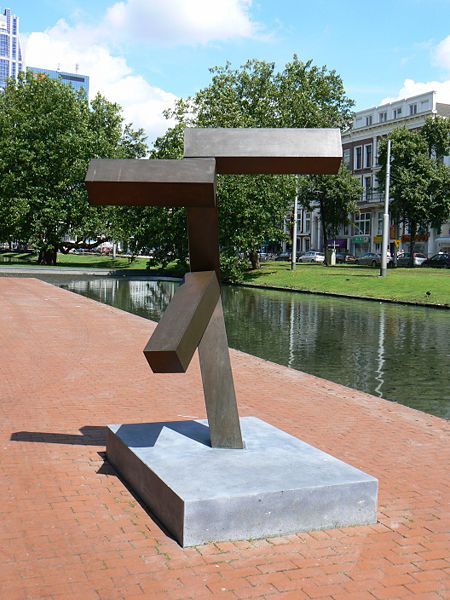 A sculpture by the American artist Joel Shapiro has stood on Rotterdam’s sculpture terrace since 2001. The sculpture is untitled and is highly abstract, yet most viewers immediately associate it with a human form. However, the figure’s posture is ambivalent and difficult to discern. The sculpture consists of five almost identical beam-like components, a form frequently employed by the artist.

The sculpture is clearly formed from wooden beams. Shapiro generally constructs his sculptures in wood, which he then sometimes casts in bronze, iron or lead. The structure of the wood often remains visible in the cast blocks, as is the case here. In this way Shapiro emphasises two important aspects of his work: the serial nature of his sculptures and the extreme simplicity of the forms he employs.

The bronze figure balances on a single leg on its plinth. The projecting and rotated limbs create a strong dynamism, giving the impression that the figure is light and mutable. The sculpture has no clear frontal aspect, so that it is interesting when viewed from all sides. 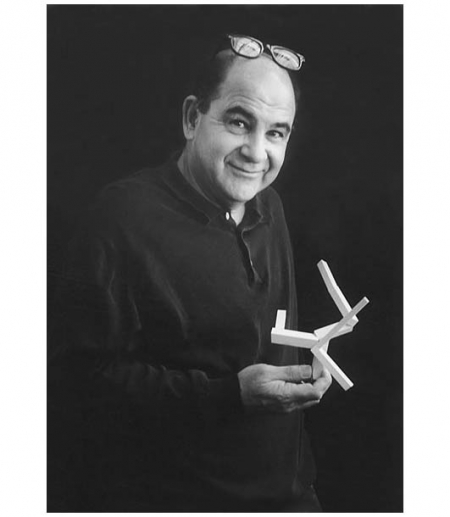 Joel Shapiro was born in is in New York (U.S.) in 1941. He makes sculptures and drawings. During a trip to India he became acquainted with that country’s sculpture, which he described as “generous outpourings of work, representing the whole range of human experience” [From: D. Wheeler, Art Since Mid-Century, New York 1991, p. 304]. This experience had a defining influence on Shapiro’s approach to sculpture.

Since 1970 Shapiro has exhibited his sculptures, which were initially influenced by the Minimalist and then Post-Minimalist idioms. But in their content and approach they produce a stronger psychological effect than Minimalist sculptures. The detachment of Minimalism, with its lack of engagement and emphasis on form over content, is replaced in Shapiro’s work by a more intuitive and expressive variant of this idiom.

Throughout his oeuvre Shapiro has consistently investigated space, volume, surface and the open versus the closed, imbuing his sculptures with an expressive power. Gradually Shapiro’s work has developed from extreme abstraction to forms in which human figures are discernible.

The American artist Joel Shapiro was influenced in many respects by the work of the minimalists of the 1960s. This influence is apparent from his preferences for an anonymous visual language, for geometry and for working with repeated, identical units. Like representatives of Minimal Art, Shapiro studied the ways a geometrical form can affect a viewer’s perception of the surrounding space and, conversely, how the experience of a space can affect the perception of form. But whereas the minimalists worked exclusively with modern industrial materials and standardized forms, Shapiro experimented extensively during the first half of the seventies with more traditional materials such as wood, clay, cast metal and plaster. The playful geometrical configurations he created in this way betray a predilection for working on a small scale. By contrast, contemporaries of his like Richard Serra and Robert Morris generally worked on a monumental scale. By covering the floor with groups of small, handmade objects, Shapiro would transform a space such as that of Paula Cooper Gallery in 1972 into a miniature landscape. The objects he presented there sometimes bore visible traces of the fabrication process.

Shapiro’s work was strongly geometrical, but despite its formally abstract aspect it was not truly abstract. The objects generally referred to some recognizable motif, such as a table, a house or a tree. His primary concern was not the content of these schematic representations, but the expressive impact of their elementary formal syntax. In an interview in 1990, Shapiro explained: ‘I have never been interested in representations, in making portraits or life-sized figures. I was, and still am, much more interested in the psychology of form.’

After 1980, the theme of the human form began to occupy a central place in Shapiro’s sculpture. Blocks of wood, in continually changing configurations, were combined and enlarged into life-size figures. His research into interlocking geometrical forms continues to this day. The sculptures it has engendered are marked by a refined interplay of abstraction and figuration. Or, as he himself puts it: ‘One moment the figure appears as a figure, and the next it appears as a collection of wooden blocks’. His 1999 work which was purchased for the sculpture terrace in Rotterdam, is a telling illustration of this. The work consists of five practically identical beams of cast bronze, which join one another at a variety of angles. A vertical beam forms the central element, and it has two horizontal sections fastened to the top, and two diagonal sections fastened to the bottom. Due to its branched structure, the object does not have a dominant viewing angle. It seems to change shape as you walk round it, jumping from one formation to another. Shapiro has pushed the abstract composition of geometrical components to the very margin of figuration, just sufficiently to evoke an image of moving limbs. According to one’s perception, the sculpture may look at one moment like a figure walking, and at the next like a swaying dancer or an acrobat balancing on one hand. Each recognizable movement constitutes another, opposite, movement. This ambiguity is characteristic of Shapiro’s work. He presents the human body as a physical and spiritual organism which is in a constant state of change. Due to this, and to their geometrical formal syntax, the sculptures are timeless and lack a sharp identity. They could be placed almost anywhere and they feel at home in all surroundings.

Although Shapiro has a preference for traditional materials like bronze, he is not interested in merely showing these materials in their pure form. The bronze blocks show traces of the fabrication process, from the rough-sawn wooden planks from which they were cast. He treats wooden sculptures with oil so that they look like bronze. All these aspects tend to counteract the primacy of the form; it must not appear absolute. A work can adopt many guises, so its meaning is correspondingly fluid.

A work like this one from 1999 has some points of agreement with Rodin’s L’Homme qui marche, although it does not project the same heavy, romantic tragedy. With Rodin and several other classic modern sculptors he admires – including Constantin Brancusi and Alberto Giacometti –- Shapiro shares an interest in the elementary human form. However, Shapiro does not allude to the fate of mankind. Rather, his sculptures proffer a chance to give any kind of constraints the slip, to be free.