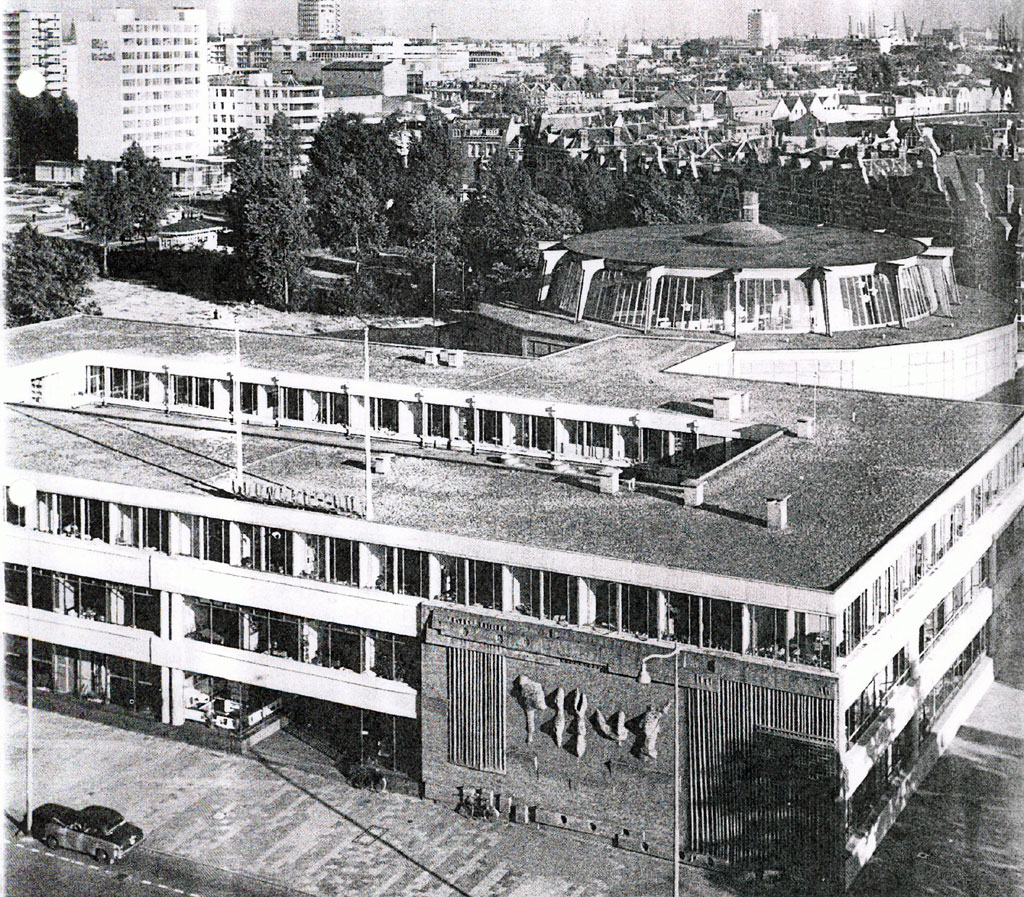 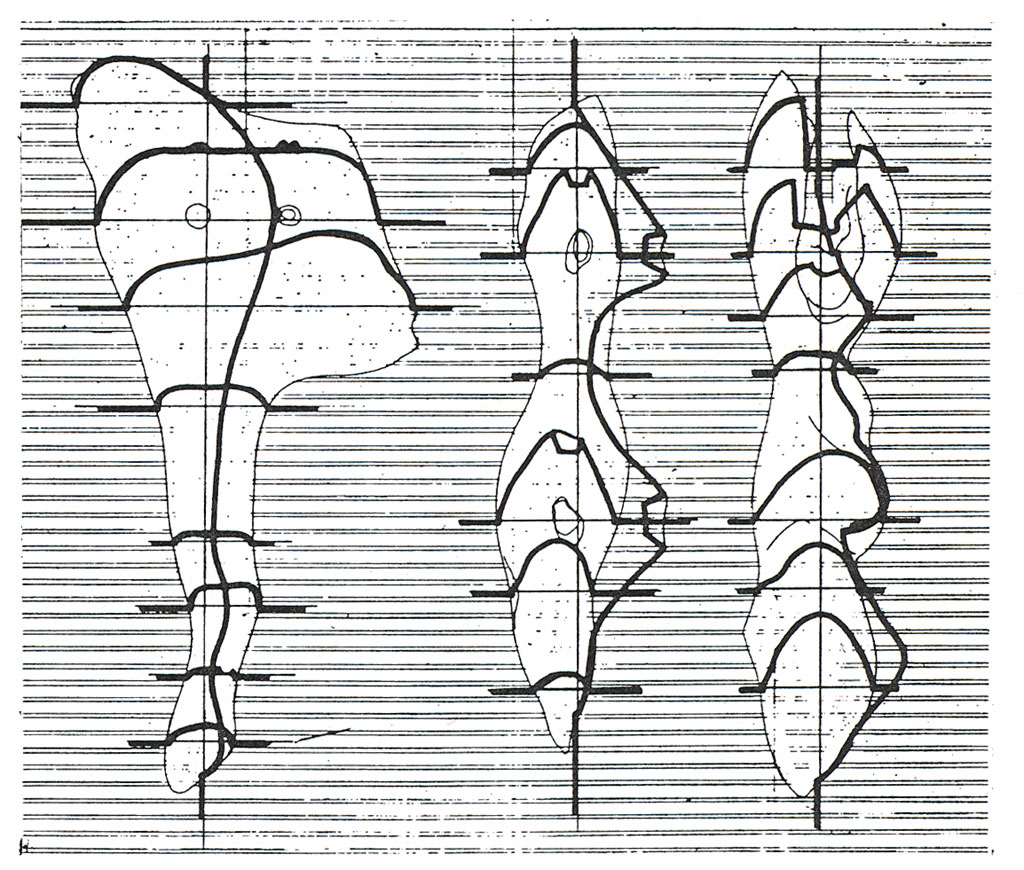 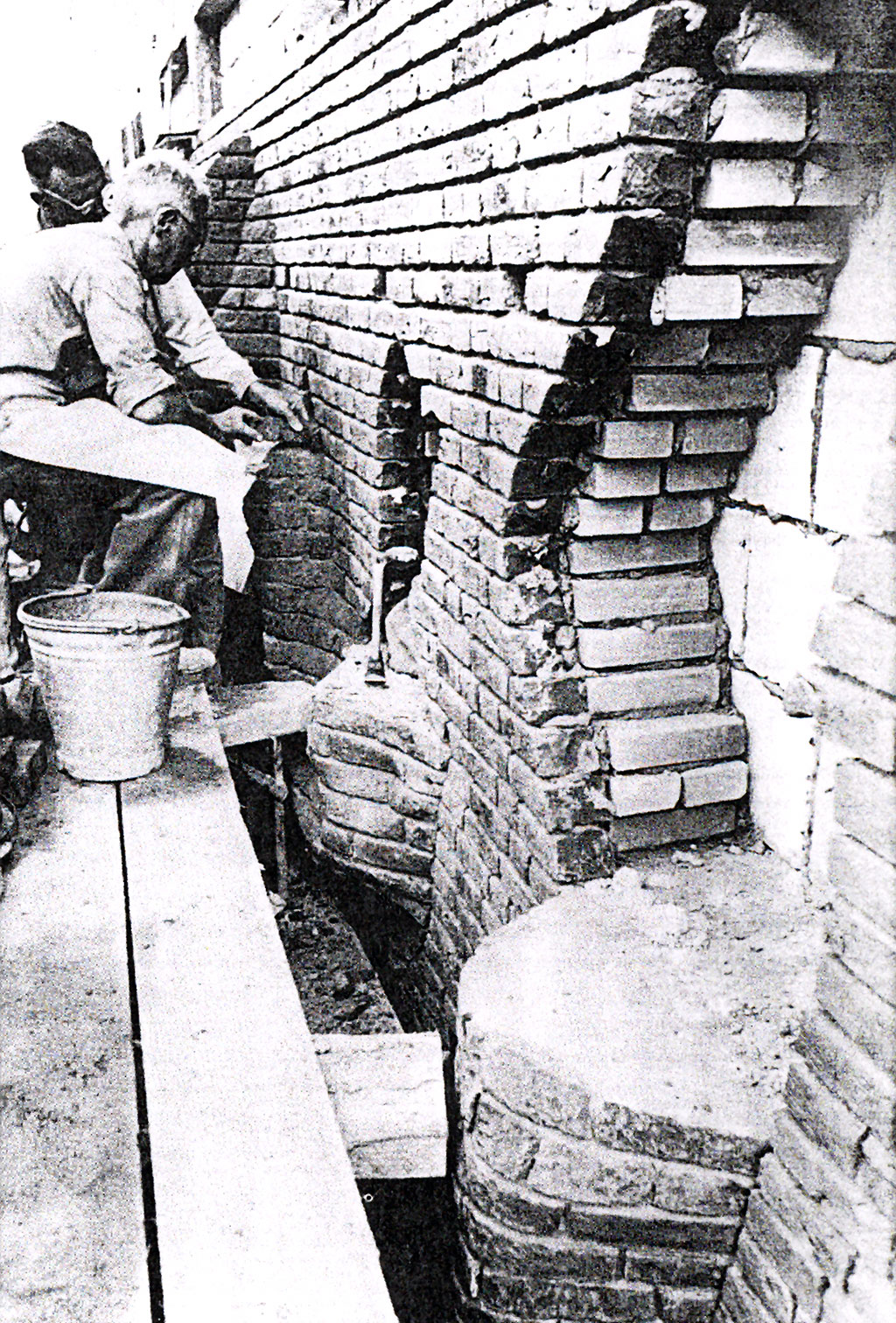 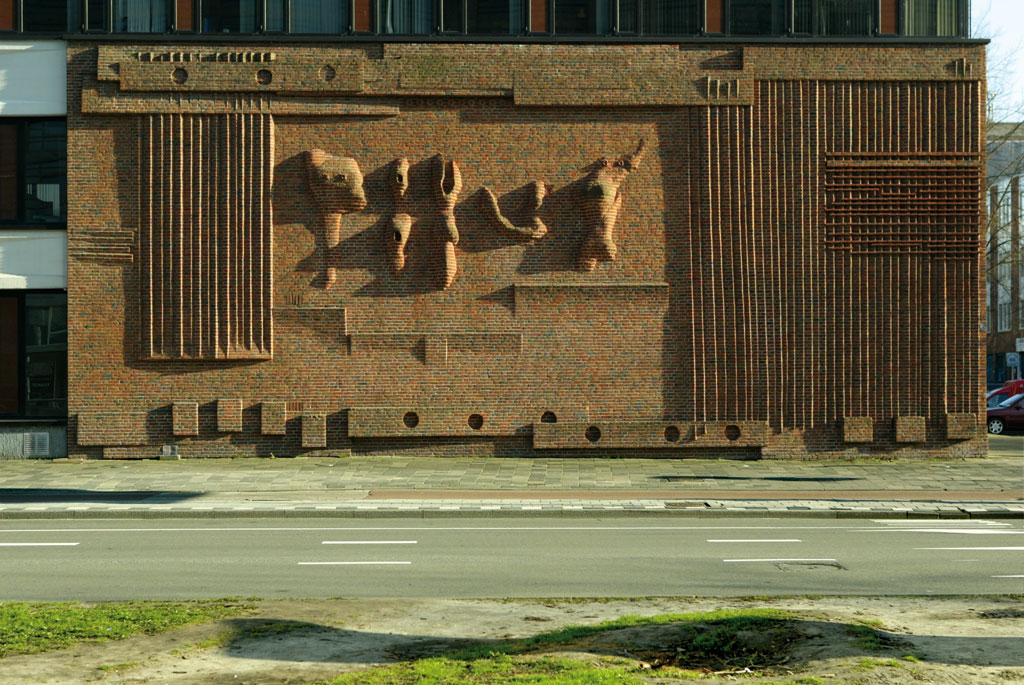 The brick Wall Relief No.1 that has graced the façade of the former Bouwcentrum (Building Centre) since 1955 was designed by Henry Moore. The relief is made up of approximately 16,000 hand-carved bricks. It took two master bricklayers 1,200 hours over the course of four months to complete the work.

The pattern of geometric elements – horizontal blocks with circles at the top and bottom, and linear vertical elements left and right – forms a kind of border. This border is interrupted at certain points so that it does not have the character of a frame. The composition is less structured at the centre, where five organic forms have been loosely juxtaposed. They call to mind bodies or plants, and stones gradually polished by water, sand and wind. 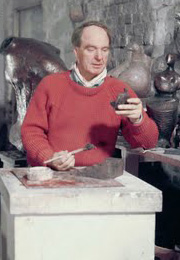 Henry Moore was born in 1898 in Castleford, England. He decided at the age of eleven that he would become a sculptor, but his parents insisted he train to be a teacher. He started teaching in 1916. As soon as he turned eighteen in 1917 he was called up to serve in the First World War. After the war he received a grant to study sculpture at Leeds School of Art. In 1921 he moved to London to continue his studies at the Royal College of Art in London. During his visits to the British Museum he familiarised himself with pre-Columbian, Egyptian and African sculpture.

In 1924 he spent six months in Italy. Upon his return he became a lecturer in sculpture at the Royal College of Art. His career as a sculptor began in earnest in 1928, and in 1929 he made his first reclining figure, which contains many of the formal and compositional properties that were determine his entire oeuvre. In the years that followed he experimented with various materials, exploring the relationship between open and closed forms and curved masses.

Moore’s oeuvre, largely indirectly inspired by the female body is dominated by several main themes: the reclining female figure, mother and child, and the family. His sculptures, either modelled or carved, appear to have grown organically or have been created by natural forces rather than be the product of human labour.

From 1932 to 1939 Moore taught sculpture at the Chelsea School of Art. He became an official war artist during the Second World War, making numerous drawings of people sheltering in London’s Underground. He achieved international recognition after the war, partly as a result of a retrospective exhibition at the Museum of Modern Art in New York. In 1948 Moore won the International Sculpture Prize at the Venice Biennale. He died in 1986 at the age of 88. He was buried in the crypt of St Paul’s Cathedral in London.

Henry Moore trained at the Leeds School of Art and in 1921 obtained a scholarship to study at London&#8217;s Royal College of Art. There he discovered the work of artists including Picasso, Brancusi and the Surrealists. At the same time he found the college’s traditional training “stuffy” and turned to alternative sources of inspiration, including the Egyptian and Aztec departments of the British Museum. The severe and monumental characteristic of the archaic influences may be found in his early work. However his most perennial theme is undeniably classical: the human figure, in particular the reclining figure and the mother and child combination. For a short period Moore produced abstract or geometric pieces before returning again to organic, chiefly human forms. Initially Moore worked in stone and wood, but from 1945 on, as the demand for his carvings increased, he worked increasingly in bronze, usually cast in editions of six or nine. Adapting to bronze, his sculptural form became more flowing and transparant. By 1950 Moore was world-famous and received an increasing number of commissions for architecture-related sculptures. In the mid-fifites there was once talk of him designing two sculptures for Central Station in Rotterdam. The relief he made for the Bouwcentrum (Building Centre) in the city was his first – and unique – executed in brick.

In 1954 the Association for the Dutch Brick Industry wanted to present a gift to the new Bouwcentrum (Building Centre), partly made from brick. The Centre’s architect W.J.C. Boks suggested a decorative brick wall and after much debate Henry Moore was commissioned for the task. In 1953 Museum Boymans had mounted an exhibition of Moore’s work and with his decorative façade elements for London’s Time/Life building (1952-1953), he demonstrated his ability to integrate sculpture into a building. However, such reliefs were only a minor part of Moore’s oeuvre. In the instance of the Bouwcentrum relief he first wanted to test the brick, since it was an unusual material for him, before he accepted the commission. He then chose Dutch bricks as he found their small size more suitable than British ones. Thus in the summer of 1954 Moore produced a working scheme and seven small plaster models, some of the figures of which resembled totem poles. The model chosen by the jury was translated by the architect in no fewer than forty-one working drawings. It was then left to two highly competent bricklayers to incorporate these designs into the brickwork. Using 16,000 hand-moulded, multicoloured clinkers they built geometric and organic forms right into the wall.

The finished relief comprises an almost ornamental frame of horizontal and vertical lines and edging, with a kind of frieze of decorative figures above and underneath which resemble metal strips and screws. These surround five organic forms in the centre of the wall. The influence of the non-western art Moore so much admired at the British Museum is evident here. According to the artist, the ancient Assyrians were already making images in bricks and taking these as an example he ‘composed with lines and planes to create a whole’, as can be seen in the frieze with the decorative figures and the free-looking drawn lines to the right and left enclosing the relief. Nowhere is the wall surface straight and symmetrical. A faint curve runs across the entire surface, while all the geometric reliefs on the sides slightly differ from one another in shape or size. This creates a lively impression since nothing is taut or static. The longer you view the wall the more you notice the subtle details. The organic forms in the centre, for instance, are both convex and concave. This is typical of Moore, who was fascinated by the tension created and experimented with such forms in the 1940s and 1950s. The plasticity of the organic forms in the Rotterdam relief recalls the free-standing group Three Standing Figures which Moore made in 1952 for National Park De Hoge Veluwe and his Upright Motifs from 1955.

Progress on the building work at the Bouwcentrum, which started in July 1955, was visually recorded every week and the photographs sent to Moore in London, which he returned with his comments and modifications. He had few comments since he was pleasantly surprised by the craftsmanship of both bricklayers. In fact the work was so perfectly executed that in the end Moore did not even consider it necessary that he should add the final touches himself. As a mark of appreciation he donated his design for the relief to the Bouwcentrum and amid great public interest the wall was unveiled on 22 December 1955 along with the formal delivery of the new building. Moore described the work as ‘restful to the eyes’ and ‘a harmonious chapter for the rhythmic story narrated by the lines and planes of the building’. However over the years this harmony between the wall relief and the rest of the building has been disturbed. When the building was extended to the left between 1967 and 1970 the entrance was moved so that visitors no longer passed Moore’s work. In the late 1980s the Bouwcentrum relocated and the building’s new owner was allowed to apply a greyish industrial sheeting which was at odds with the brick relief. Because of this Moore’s relief is nothing more than a small occurrence along a busy main road. That is a great pity.